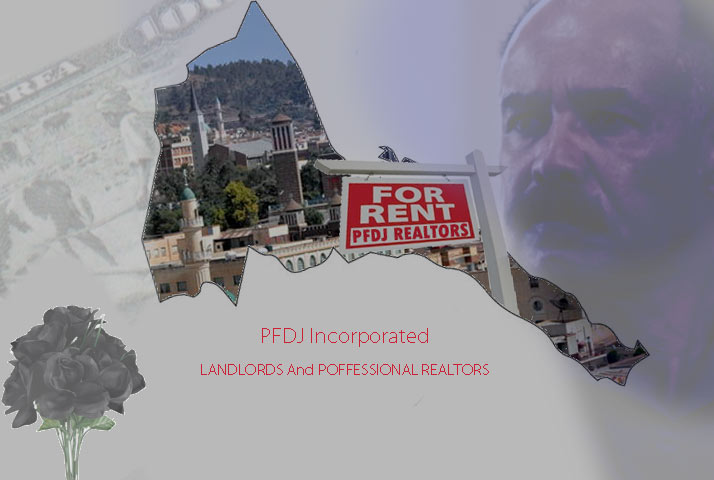 A few weeks before the summer of 2017, the Eritrean ruling party increased its control of rental properties that are owned by individuals.

In continuation of its “draconian decisions, the government of Eritrea is now setting the rental prices that landlords should charge for their properties.”

Until the beginning of this year, visiting and vacationing Diaspora Eritreans used to haggle with landlords over the rental prices which was decided by supply and demand. But as of last summer, the government fixes the price that renters should pay. In addition, the new government regulations have fixed the square-meter price for house and apartment rentals.

The new decision requires property owners to sign the rental deals at a neighborhood government office, a relic of the Derg regime known as “Kebele”. In some cases, government officials collect the rent from renters and delivers the after-tax balances to the landlords. This practice has become a source of interference as well as as an opportunity to spread further corruption and bribing of the officials.

In 1991 when Eritrean territories were liberated, the then victorious resistance organization assumed power and soon declared all properties that were confiscated by the previous occupying forces as state property.

Beginning in 1974 when it assumed power in Ethiopia, the defeated Derg regime had confiscated properties from individuals and institutions. After the independence of Eritrea, original owners were required to pay huge amounts of back-taxes and fees before they could re-own their properties. The requirement also covered properties belonging to religious and other institutions.

Beginning in 1993 when Eritrea became formally independent after a UN supervised referendum, senior officers of the regime run amok selecting and occupying villas confiscated by the Derg regime and occupied them. Nepotism became rampant while the regime attempted to become a national government and establish itself.

Furthermore, the ruling party established new companies and infused heavy capital to the struggle-era companies that it owned, and began to monopolize all sectors of the economy while at the same time it systematically pushed the private sector out of the market save for a select few affiliates and loyalists.

Eritrean economists estimate that in the last 26 years, “only about 5% of what the country needs to accommodate the natural growth of population and the needs of the market in general were built.”

In order to solve the housing shortage, Eritreans had resorted to dividing their residential plots into two, selling half the lots to buyers who agreed to build two houses in the divided plot—one for themselves and another for the original owner as a payment of a portion of the plot.

Over the years, “due to corruption or to purposely to impoverish the citizens, the government seemingly turned a blind eye on the buildings that were being constructed…” However, every now and then it demolished some houses and left its residents in the open.

Three years ago, the government launched a massive campaign to demolish “unlicensed” buildings and razed hundreds of houses to the ground. And as of last summer, on top of being the major landowner in Eritrea, the ruling party assigned itself two additional roles: landlord and real estate broker.

Traditionally, particularly in Asmara, homeowners build additional rooms on the side to serve as servant quarters or guest rooms. But due to the shortage of houses the residents were let out the extensions known as “servizio”, to visitors and rake considerable revenue.

Tenant leads are usually referrals by previous renters or relatives residing abroad, and in most cases by local brokers.

Previously, property owners usually paid taxes based on a proclamation issued in the nineties though the government kept changing the rates frequently.