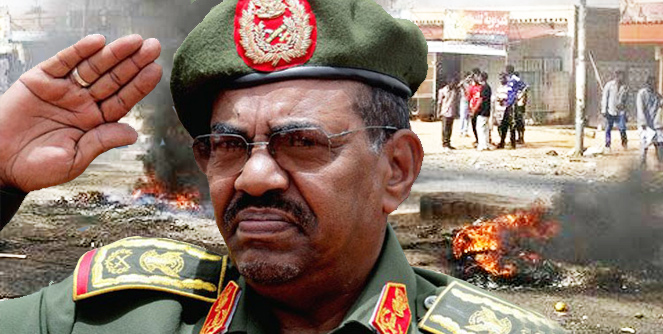 Serious popular unrest and demonstrations are rocking Sudan since last week. The unrest that started as a reaction to bread and fuel cost increase is now aiming higher and demanding the removal of the 30-year old ruling party regime. As expected, the unrest did not subside but worsened as more Sudanese joined it. In addition, Sudanese diaspora elements have joined the uprising and are demonstrating against the regime in Western cities.

The beginning of the unrest coincided with the visit of Al-Bashir to Damascus on December 16, 2018, where he met Bashar Al-Assad the embattled Syrian leader. The visit irritated the Egyptian media, which is still piling criticisms against the Sudanese government. However,  reactions from other member-countries under the Saudi umbrella (which includes Egypt, Bahrain, UAE, and Saudi Arabia) has stayed mild. As a member of the coalition, Sudan has sent troops to fight in Yemen and has already lost dozens of its soldiers in the conflict.

In the first few days of the unrest, in what looks like a repeat of the Egyptian army that stood with the people in the Arab Spring demonstrations of 2012 against president Mubarak, the Sudanese armed forces didn’t deal with the demonstrators brutally leading observers to surmise the army was siding with the people. However, dozens of people have lost their lives in several cities.

The fear that the seemingly neutral position of the armed forces might be broken is proven right after the death toll increased. Al-Bashir is an army general and the commander in chief of the Sudanese armed forces.

According to Amnesty International, 37 people were killed in the clashes between the demonstrators and the security forces.

The forceful participation of Sudanese political coalition parties has swayed the balance to the benefit of the demonstrators, a development that could prove to be a lethal challenge to the ruling party. A march to the presidential palace is scheduled for today to demand from Al-Bashir to step down.

It’s significant that the current unrest has its epicenter in Atbara, a railway city that used to be the center of the world’s biggest Communist Party. The unrest spread from there and has since spread to all major cities including Gedaref, a town on the Eritrean-Ethiopian border, and Khartoum where the government has announced the closure of the university.

Across the border in Eritrea, the army has ordered the soldiers to return to the garrisons and stay alert. And though a spill over to Eritrea from the unrest in Sudan is still unlikely, security situations in the border towns are tense. The Eritreans security forces have made several arrests of soldiers and civilians in the town of Tessenei, in a step that residents believe is a precautionary measure.

The Eritrean and Sudanese governments are not in good terms for over a year, though for decades their relations fluctuated between excellent and confrontational.

In 1989, Sudan’s military under the leadership of Colonel Al-Bashir ousted the coalition government of prime minister Sadiq Al-Mahdi with excuses that it failed to end the rebellion in the Southern part of the country and for failing to fix the derelict economy. Soon, the National Islamic Front and its leader and ideologue the late Dr. Hassen Al-Turabi threw their weight behind General Omar Al-Bashir. However, Al-Bashir could neither fix the economy nor end the South Sudan rebellion, which culminated in the separation of the South in 2011. Thirty years later, Al-Bashir still clings to power.