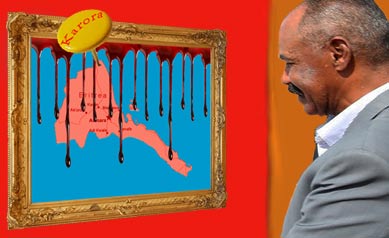 On December 22, awate.com’s Gedab News reported that “13 children who were escaping from Eritrea were gunned down and thrown in ditches somewhere between Ghindae, Eritrea, and Port Sudan, Sudan.”  We now have information that the party responsible for their murder was the Eritrean government and the place where the crime occurred is near Karora, in northernmost Eritrea bordering Sudan.

Although the news is being conveyed to the parents now, the massacre actually occurred in early September.

The children were gunned down while they were mounted on a truck and being escorted from Eritrea to Sudan.

The government has a shoot-to-kill policy for anyone who leaves the country “illegally.”

It is illegal in Eritrea for military-conscription age Eritreans to leave the country.

Of the 13 youth gunned down, three were sisters aged 13, 16, 18. Gedab News had incorrectly identified their age as 14, 18, and 19. The three girls, whose names we have not been able to ascertain are the children of two veteran fighters of the Eritrean People’s Liberation Front (EPLF), now the People’s Front for Democracy and Justice (PFDJ), the ruling party in Eritrea.

Their mother, a nurse during Eritrea’s war of independence, is in Toronto, Canada, to assist with the childbirth of her first-born, age 30.  The daughter who lives in Toronto was born “in the field” [rebel-held territory of Eritrea]; she was ten years old when Eritrea became an independent country in 1991.

Once in Eritrea, the family of the combatant fighter, as is the custom in Eritrea, pressured her to have more children and in quick succession she had four more beautiful children aged 21, 18, 16 and 13.  The father, a military officer, was disabled during the war of independence.

While the 21 year old stayed at home to take care of her father, her younger sisters made a fateful decision that thousands of Eritreans make every day: to flee the country. They hired a smuggler who specialized in the Ghindae-Port Sudan escape route, one of several used by Eritreans. From the scene of the crime, Karora, it appears that all 13 children had almost made it to the border when they were gunned down while still in the vehicle transporting them, and their bodies thrown in ditches to cover up the crime.

Since September, the father, Tesfahanes Hagos, a disabled combatant, had been inquiring on the whereabouts of his daughters by visiting Eritrean police stations, jails, and national security offices. It is customary for government officials to give family members of disappeared Eritreans complete denial.  Either due to his seniority, or his pestering, last week, government officials eventually gave another customary answer, “these are our daughters, just like they are yours, and no harm will came to them: we have them in custody because they broke the law.”  After more pestering by the father, the government officials broke down and confessed the truth: that his daughters, and 10 others, had been killed while trying to escape.

Traumatized, since September, the father and his 21-year old daughter have been hospitalized.

While this is a commonplace story of every Eritrean family, what makes this one different is that all of the 13 children (7 male and 6 female) who were murdered by the government were the children of Eritrean soldiers and military officers. In fact, most of them are from Qachew, the Denden camp for soldiers: they are children of soldiers. We regret that we are only focusing on the 3 of the 13 children: we know for a fact that the entire city of Asmara is engulfed by news of the death of all the children but, todate, the government media has not said a word about its September massacre of Eritrean children. It was too busy celebrating September 1: the launch of Eritrea’s armed struggle.

This Sunday, in Toronto, Canada, the family of the three massacred children will hold mass and church services at a Catholic Church to memorialize the murdered children.  Their biography will be read: we hope to have their names and their pictures then and to share it with our readers.

For a random example of how the Eritrean government pretends that it cares for Eritrean victims as much as their families, please refer to this expose on the arrest of Eritrean hero Bitweded Abraha.   He fought for Eritrea’s independence for 22 years; and he has been in prison, without charges, for 22 years simply because he warned Eritreans of the looming dictatorship.  Many of the Eritrean senior officials who were covering up for the crimes of Isaias Afwerki to the parents of Bitweded Abraha have been thrown in jail and left to die.