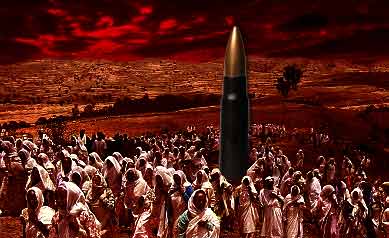 Gedab News has received reliable information that 13 children who were escaping from Eritrea were gunned down and thrown in ditches somewhere between Ghindae, Eritrea, and Port Sudan, Sudan.

The specific location of their murder is not known.

The 13 children were part of a group of 16 children who had arranged with an Eritrean trafficker to smuggle them out using the “Ghindae-Port Sudan route” out of Eritrea four months ago. Escapees do not report such incidents immediately for fear of retribution.

The Ghindae Route is one of several used by Eritreans to escape from Eritrea.

Highlighting the dire straits the country is in, the parents of the 13 children who were murdered are mostly government officials.

One of them is a colonel in Sawa (name withheld) whose wife, a veteran of the EPLF, is in Toronto visiting her daughter. Of the thirteen children, 3 of them were their daughters, sisters aged 14, 18 and 19.

The news has roiled the city of Toronto, Canada, and Eritreans who heard the news are in a state of shock.

Our source says, “It is tragic! Father and mother, both ‘Tegadelti’ [veterans of Eritrea’s war of independence], attempted to smuggle their three children out of a country they spent a lifetime to liberate, and all three were brutally murdered.”

The fate of 3 of the 16 children is unknown. Presumably, they are the ones that confirmed the death of the 13 Eritreans they were traveling with.

It is likely that the families of the 13 children, all in Eritrea, have been notified of the death of their children and the city will once again be engulfed by grief.

We will provide you with additional information as it becomes available.