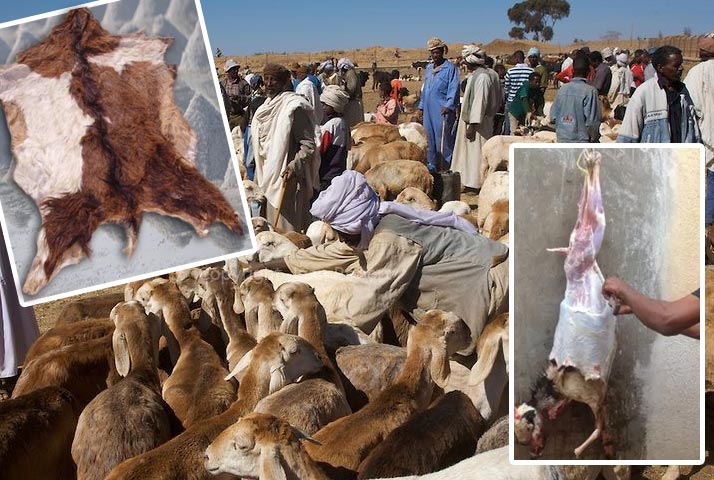 The once thriving skin and hides business has declined so much that rotting skins in the streets have become a source of foul smell and trash in the streets of highly populated Eritrean towns, but mainly in the capital city of Asmara.

Recently, skins lost their value so much that they are often trashed due to lack of demand. It has become common to discard skins in the streets where they rot and omit putrid smell, particularly in poorer neighborhoods. In the past lamb hides were discarded because its market value is meager and not in demand.

According to trade sources in Asmara, “as of recently, different skins and hides have lost their value and are being discarded.’ He added, “it is strange, like a poor man throwing the little money he has in the streets.”

In 1991 when Eritrea became independent, there were four functioning tanneries in Asmara; only one tannery was established in 1995.

Traditionally slaughterers roam the streets to slaughter the animals and are paid in kind with the skin of the animal which they sold to skin and hide traders. Traditionally, the traders dried the skin using salt and roots and resold them to big trading houses who exported them to European markets, mainly Italy.  But in the last two decades, there were some exports to China, Pakistan, and India. However, the new market opportunities were lost because the quality of Eritrean leather products remained inferior.

The anti-business policies and attitude of the Eritrean government which is obsessed with running everything on its own discourages potential Eritrean investors and foreigners alike. In the past, meat and livestock export was a major source of hard currency and the meat processing and packaging industry provided ample job opportunities. In addition, the skin and hide tanning business supplied fleshed, dried and semi-cured hides to several footwear and other leather product factories in Asmara.

A large segment of the Eritrean population depends on herding for their livelihood and the livestock contribute greatly to the national economy.

In the past few years, major leather based businesses and tanneries either closed shop, are idle, or are operating at a bare survival level due to the many haphazard government legislations. They are hampered by the imposition of exorbitant taxes, interference by the government and the ruling party, lack of labor, and lack of supplies that require hard currency to import. The general decline of the Eritrean economy, and the government’s anti- private sector policies are also major encumbrances.

After 1991, some business had obtained modern machinery and attempted to expand and improve their production, but they never reached their full potential. But the fiscal policy of the government that was implemented over a year ago, and its strict control of cash in circulation, dealt a serious blow to most businesses.

Livestock and cattle herding is one of the major sectors of the Eritrean economy. Hence, skin trade and tannery used to be an important source of jobs and hard currency for the country that boasts of a huge number of livestock relative to its size and population.

Eritreans slaughter around ten-million animals every year, mainly sheep and goats but also bulls and camels. Muslims and Christians alike, strictly adhere to religious rituals and sacrifice animals during the many religious feasts—even the poor make sure to slaughter an animal during religious holidays.