The Eritrean Movement for Democracy and Justice (EMDJ), a new political organization founded by Eritreans exiled to Ethiopian refugee camps, is convening its first congress in a camp near Shire, Ethiopia, close to the Eritrea-Ethiopia border.

The organization, which claims it has an armed wing operating inside Eritrea, was founded in April 2011.

The members of the organization are drawn from the Eritrean refugee camps in Ethiopia and they are mostly escapees from Eritrea’s forced labor and indefinite conscription.

The organization’s political programme calls for the removal of Eritrea’s ruling party, the People’s Front for Democracy and Justice (PFDJ) and the establishment of a “popular, democratic, federal government” which respects the rights of Eritrea’s “nations and nationalities.” One of these rights is the right to “self-autonomy without restriction.” The similarity between the name of the organization and that of the ruling party carries to slogans: EMDJ’s is “Victory to the masses—in practice!”

EMDJ came to the attention of the Eritrean opposition for the first time in November 2011 when its representatives introduced their organization to the conferees of the Eritrean National Conference for Democratic change (ENCDC) in Hawassa, Ethiopia. 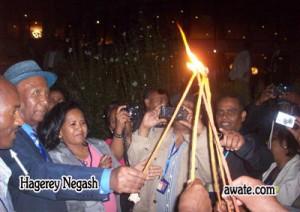 In an emotionally charged evening, a few attendees celebrated the introduction of the group, seeing great hope in its newness and claims that it has sympathetic Eritrean youth throughout the world.

Major officials of the Ethiopian government who deal with the Eritrean opposition have all traveled to attend EMDJ’s congress. But unlike other congresses, none of the known Eritrean organizations, EDA or ENCDC leaders or delegates, were invited to attend the opening ceremony.

None of the EDA leadership that Gedab News contacted had any news of the planned congress other than what they heard through the grapevine.

In a related news, last week, the Ethiopian authorities briefed the Eritrean opposition leaders about the mid-March incursion that they carried out inside Eritrea. Gedab News had contacted some members of EDA leadership who had said that they had no prior knowledge of Ethiopia’s attack.

In its brief existence, EMDG has drawn scrutiny due to colorful developments it was associated with.

First was the case of Angesom, who was influential member of the organization. Angesom (no last name available) was allegedly implicated in the lucrative human trafficking racket and law-enforcement officials searching his residence at a refugee camp uncovered “huge amounts” of cash. Angesom was promptly arrested by Ethiopian authorities.

A cultural troupe which was set up by EMDJ was disbanded and its equipment sold by individuals in Ethiopian towns.

Lastly, it suffered a setback when one of its members surrendered to the Eritrean regime taking intelligence assets with him.

Negarit’s reportage on the Hawassa congress has a mention of Hagerey Negash and his presentation on his organization’s military wing. You can read it here: