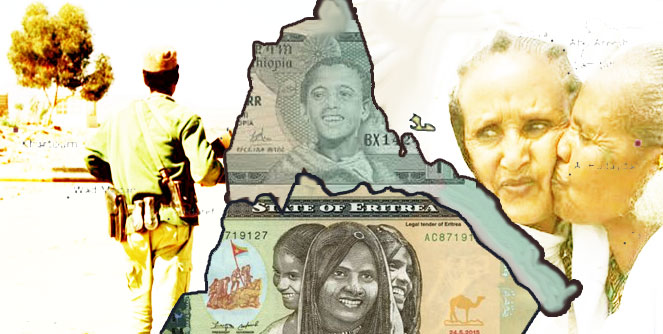 The euphoria of the first few days of cross-border trading between Eritrea and Ethiopia is now facing reality. Impulsive moving of goods between the two countries has now slowed down due to many factors, but mainly due to a shortage of Nakfa currency. The border was opened without any declared policy or planning to organize and regulate the cross-border trade. As a result, it created confusion among traders.

In late 2015 the Eritrean government issued a proclamation announcing the change of the national currency with new bills. According to banking sources, the decision was meant to provide the government with more control over the economy, mainly inflation, but also to enable it to curb the smuggling business and to “stabilize a wobbly banking system.”

A large amount of Nakfa bills was not returned to the banks for exchange because “some people were afraid they would be asked to disclose the source of the money.

Since 2016, depositors were allowed to withdraw only a maximum of 5,000 Nakfa per month from their accounts.
Unconfirmed reports indicate that as the volume of cross-border trade increased, a large amount of old Nakfa bills were discovered in the market. The reports claimed, “instead of burning the old bills withdrawn from circulation, they were stored in shipping containers and lately it was discovered that a large quantity has disappeared from the stores.”

During the last few weeks, large quantities of Nacka bills that many people had hoarded during the last three years to avoid depositing them in the banks energized the cross-border trade. However, in the last few days, considerable quantities of old Nakfa currency started to circulate alongside the limited amount of genuine Nakfa currency in the market.
Nakfa has marginally appreciated against the Ethiopian Birr.

As Ethiopian traders find it hard to move their goods as fast as they did when the border was first opened, some of them are leaving their good behind with other traders for safekeeping and distribution. Traders usually stay for a couple of days to sell their goods that are now taking longer to move.

So far, Ethiopian traders have been bringing mainly grains, flour, and building materials, especially cement and corrugated metal roofing. In return, the Eritrean market could only provide them with electronics and gold brought from Dubai.

Meanwhile, Eritrean authorities are apprehensive that expired goods are entering Eritrea and electronics imported with Eritrean hard currency are ending up in the Ethiopian market, a net-loss of hard currency earning for Eritrea.

Both Eritrea and Ethiopia are suffering from severe shortages of hard currency due to a negative balance of trade.

Background to the story:
Eritrea’s New Capital And Social Control through Currency Change