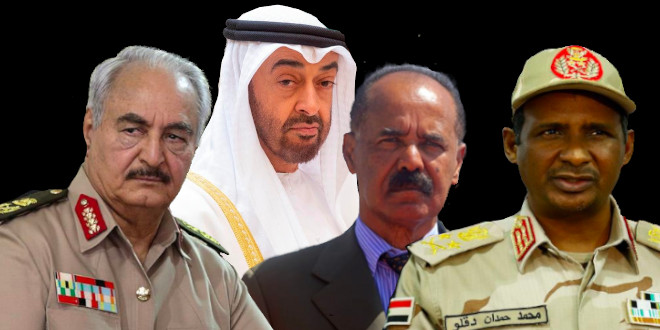 In the last few weeks, UAE airplanes transported hundreds of Sudanese mercenaries to Libya through an air bridge over Asmara, the Eritrean capital city.

Thousands of Sudanese mercenaries are fighting alongside both the government forces and the forces of General Hafter, the two warring sides in the Libyan conflict

Eritrean sources informed Gedab News that “unbranded airplanes operated by the UAE have been flying out of Asmara carrying mercenaries who arrive overland from Sudan.” The plain white painted airplanes mostly arrive and fly out of Asmara at dawn.

The sleepy Asmara airport serves a negligible number of flights except Ethiopian Airlines, the main carrier that runs regular daily flights to and out of Asmara.

Isaias Afwerki has close diplomatic and military relations with the UAE which supports General Hafter in his fight to oust the internationally recognized Libyan Government. Also, Isaias’ relation with the transitional government of Sudan is cold, contrary to his close relations with General Mohamed Hamdan Dagalo (aka Hemdti), the = commander of the much-feared Sudanese Rapid Support Forces.