Posted on April 22, 2020 by Ismael Ibraheem Al-Mukhtar in Articles 447 Comments 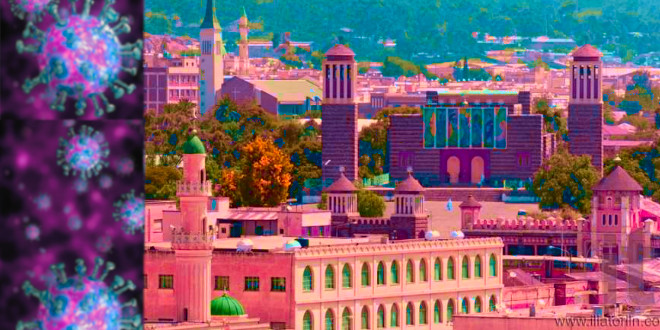 The world today is in a lockdown and under quarantine. Millions across the world are confined to their homes, travel is restricted, streets are deserted, businesses are closed, schools are suspended, supplies are running short and morgues are full of dead bodies. Many have lost their livelihoods, their loved ones and their sense of security. A sense of fear and uncertainty is grappling the world. Like many others, I have been confined and working from home for weeks. Like everyone else, I feel sad for what is happening, but not surprised or taken aback. This isn’t my first experience with such a lockdown, I have seen it before and experienced it firsthand, not for weeks or months but for years. During my teens my native city, Asmara, was in a human made “lockdown” that turned it from a bustling city into a ghost town!

A glimmer of hope that turned into a nightmare

The 1974 Ethiopian coup that ended Haile Selassie’s imperial rule brought hopes of positive reforms and peaceful end to the conflict in Eritrea. The ascension of General “Aman Andom”, an Eritrean, to the position of Chairman of the Provisional Military Administrative Council (Derg), gave greater hope to many Eritreans. General “Aman Andom” visited Eritrea; he spoke in a public gathering in the main stadium “Cicero”. His speech was positive and raised expectations. There was greater freedom of political expressions and much ease in political tension. People were openly talking about politics, freedom and liberation. In every corner of Asmara, you would hear the echo of the popular song of “Yemane”:

O you passerby, if you see my darling convey my greeting to her!
I see her curtailed by the mountain
I miss her a lot, my darling, is she well and safe?!

Everybody understood the “darling” was a code word for freedom. The Eritrean liberations movements (both Shabia and Jebha) were in the Hamasen region, in walking distances from Asmara. With the new wave of political ease, residents of Asmara were flocking to the outskirts of Asmara to meet the young fighters of the liberation movements and chat with them. Many young Asmarinos joined the struggle at this time. There was a buzz in Asmara about going out and meeting these fighters.

On a sunny Sunday morning, I left Asmara with my friends to see the fighters in the area of “Tsaazega”, few hours walk on foot from Asmara. As we left the city, we were looking for a guide, but to our surprise, we realized we weren’t in need of a guide, lots of people were making the same journey. Everywhere villagers were joyfully greeting us, mothers were shouting “Ajokhum ezom dekei”- be courageous my children. We arrived at “Tsaazega”, the typically quite village sounded like a marketplace, full of hundreds of visitors from Asmara. We saw a long line of Asmarino youth wanting to join the struggle. The commanders of the liberation movement were overwhelmed, and they had to turn back many of the young. Those who were accepted were jubilant and those who were turned back were tearful. It was a moment of high nationalistic fervour.

Two fighters come to speak to the huge crowd about the struggle and the dream of liberation. As we were gathered in the open field, we saw a bus coming, carrying some dignitaries from Asmara. I could
recognize two faces, the principal of “Jalia” school, Ustaz Saleh Hamed(1) and Mohamed Saeed A. Basheer, an official in the department of education. The dignitaries were met by the liberation commanders and were taken to a meeting place. We were told they were part of a mediation committee sent by the government. By the end of the day people were flocking back to Asmara in hundreds. As we were getting close to Asmara, we received warning of potential arrests and thus we had to take a different route to Asmara. This was an ominous sign of a changing mood within the ruling establishment. In Addis Ababa, the tone of the revolution was changing, the power struggle between the leaders of the coup was intensifying. General Aman Andom was becoming marginalized and eventually he was assassinated. There was a new tripartite leadership in Ethiopia, Teferi Bante, Atnafu Abate and Mengistu Hailemariam. A new slogan was proclaimed “Ethiopia Tekdem” -Ethiopia first- and it was reverberating across the nation.

The mood in Asmara was changing and stories of disappearances were emerging. One particular incident shock the city. A man known as Omar Hangale and few other men in his company were taken from home by government agents, in the night of the Muslim celebration of Eid Al-Adha. They were assassinated the same night and their bodies were found outside the Asmara stadium in the early morning of Eid Al-Adha. My elementary math and English teacher, Ustaz Mohamed Ali, was one of them.

Despite this creeping terror, Asmara was still a bustling city. The markets were busy, food supplies were abundant, villagers were bringing their farm products and live stocks and selling them in the markets. The most important street in Asmara, “Comishtato” was crowded with the young, the Italian style cafes around the street were full of people, movie theatres were busy showing Indian and Italian movies. Foreigners of all nationalities, Hadhrami Yemenis, Italians, and Indians could be seen running their businesses and enjoying their prosperous lives. The out of town bus stations (the Aberra and Haragot buses) were busy transporting people across Eritrea. As young people, we freely played soccer in the fields, chatted in the corners of the neighbourhoods, wandered around the streets of Asmara, biked to the beautiful surroundings of “Beleza”, “Arbi-Rebou”, Mai-Nefhi, etc. Schools were full of students, streets were full of street-vendors, comedians (such as “Zegenfo”, “Ababo”), and unfortunately many beggars and homeless. Soccer fans of the major teams, “Hamasen”, “Akeleguzai”, “Marroso” filled the main stadium and their team clubs were bustling. The “Bar Danadai” was full of its Italian patrons and the sounds of the rolling bowling balls can be heard loud across the neighbourhoods.

In a sudden change of fate, my bustling city Asmara came to a stand still and eventually turned into a ghost town. It was a typical Friday in Asmara, people were busy with their livelihood, in the evening “Comishtato” street was busy as usual. As night descended, the quite evening was suddenly shaken by unprecedented sounds of bombs and gun fires that lasted for hours into the night. By dawn the gun fire subsided, the residents of Asmara were deeply shaken. On Saturday morning people left their homes cautiously to go to work and school. Until noon time, the city was quiet, but shortly after, soldiers were seen in the streets, there was heavy shooting everywhere, people were scrambling to find a place to hide. The city streets were deserted, only soldiers, their green jeeps, and huge trucks could be seen. A 6 AM to 6 PM curfew “coprifuoco” was imposed in Asmara, travel was banned, and schools were closed. Stories were emerging of many innocent residents of the city being killed by the soldiers in an apparent “revenge”, including many homeless; shops were looted, particularly the gold shops.

New waves of young soldiers were seen arriving in Asmara, aerial bombardments in the surrounding of Asmara can be heard. The radio was becoming very militant. Every day there was a new decree. Electricity was completely cut off from Asmara probably for more than a year, there was sever shortage of food, water and supplies, the city was becoming a ghost town. All foreigners abandoned the city, leaving their homes and businesses closed. Natives of Asmara were sneaking out on foot, donkeys and camels and going to their villages. Many young people left the city to join the armed struggle or take refuge in Sudan. Those who stayed were becoming lonely. Parents were struggling to keep their children at home, for fear of being kidnapped or killed in the street. Walking in the street was a frightening experience. Sudden gunfire and shooting was becoming a daily occurrence. A new terror group known as “Affan” was unleashed in Asmara, they were seen criss-crossing the city with their Volkswagen vans, kidnapping people, particularly the young. Another terror group, a militia, was let loose in Asmara. They were known as “Nech-Lebash”, they terrorised people, stole properties and killed many. Nightly death squads were terrorizing families and
liquidating their loves ones in cold blood. Bicycles were completely banned. Fear was everywhere, my city was in a grip of a vicious menace.

After almost two years, the schools were reopened. My school that used to be crowded to capacity, was half empty. Many of our teachers didn’t come back. Going back and forth to school was a risky venture. With the “Affan” roaming the street and sudden gun shooting, the danger was real. The school curriculum was overhauled and many of the teachers were new. Marxism became the new ideology of the state. New heroes were introduced to us. Marx, Angles, Lenin, Mao, and “Che” Guevara, became the new role models. Long forgotten were the heroes of the Haile Selassie era school curriculum, Atze Tedros, Ras Alula, Aba Tecklehaimanot, etc. They were deemed to be feudalists and reactionaries. Our teachers were Marxist zealots and ardent atheists who publicly attacked religion and any religious practices. There was mistrust and fear in the classrooms. Some students were suspected of being spies of the government and some teachers were believed to be members of nightly death squads.

The exodus of the youth continued unabated; every parent was looking for ways to smuggle their children out of Asmara. Many of my friends left the city, I was waiting for my turn. Eventually my turn came, and I departed my beloved city with mixed emotions of sadness and relief. I never entertained the idea of living anywhere else other than Asmara. I bid farewell to Asmara, feeling deep in my heart that I shall come back soon, to live in it free of fear, oppression, and tyranny!

1 Ustaz Saleh Hamed is believed to have been kidnapped later by the “Affan” and secretly liquidated with no traces.