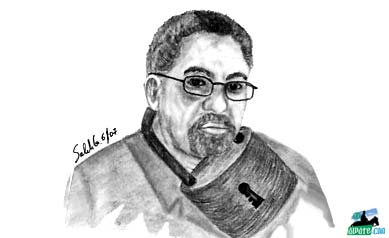 If he doesn’t change his mind, it seems Isaias Afwerki has finally appointed a minister of information, a position that remained vacant since Ali Abdu, the previous minister, abandoned the PFDJ regime over two years ago. Yemane “Charlie” Gebremeskel was the director of the office of the president, a position he held for as long as Isaias has ruled Eritrea (unelected) for over two decades.

Charlie is a spin master who recently surprised many Eritreans by denying the existence of Demhit (TPDM), the Ethiopian armed opposition forces in Eritrea, .

In reaction to Charlie’s denials Sal Younis commented: Yemane “Charlie” Gebremeskel, Director of the Office of the President, goes “full retard” regarding DeMHT and the UN Human Rights Rapporteur on Twitter. Invited from where, Yemane? Do they have “liberated” Ethiopian lands they use as a base? Where is that? Alla? DekemHare? Harena?

Denying the existence of Demhit (TPDM) in Eritrea is as outrageous as denying the existence of Mt. Embasoira. However, our archived materials show that lying and denying is in the nature of the PFDJ.
In October 15, 2001, awate.com published a Pencil editorial entitled, “A Tale of Two Eritreas,” which included a transcribtion of a BBC interview with Charlie. It is under the sub-heading, “Stuttering Yemane Gebremeskel” which we are re-posting to congratulate the new minister for his new chair-warmer position.

We were going to ridicule the following interview; but it does a good job of ridiculing itself all by itself. The only thing we need to remind you is that Mr. Yemane Gebremeskel is the official Spokesperson of the G-1. (Unless he was reshuffled in one of the frequent reshuffles.) The BBC conducted the interview on Wednesday, October 10, 2001:

BBC: Why is the government muzzling its critics?

Yemane: They were not muzzled. This thing has been going on for thirteen months; the government was extremely tolerant, extremely patient. When people were going beyond the law, playing, when everybody in the country sees is illegal…

BBC: Like What? Just give me an idea, what did they do? Were they holding clandestine meetings? Were they talking to overthrow the government? I mean, what is the threat, the threat that this group posed?

BBC: It is not the activities that you didn’t like or the public statements that you didn’t like… the statements that … they felt the president was not consulting enough and the country was not heading towards democracy fast enough. I mean basically criticizing the leadership?
Yemane: Nobody in this country is arrested because he holds or expresses a different opinion. Nobody in this country, never, ever has been arrested because of his views. I mean, anybody is free. I agree with you [inaudible] the government is doing. You are free to express your opinion.

BBC: What are these people going to be charged with?

Yemane: I cannot prejudge that now. It is not my job. I think it is the job of the ummmm, unnn, um .eh…legal authorities.

BBC: But they are being held in detention without charge at the moment?

Yemane: Ummm…you know these are legal matters. I am, no… I don’t think I am qualified to- to– to- answer those, but I think the government here operates within the bounds of legality.

BBC: One of the dissidents, Mesfin Hagos, has indicated that he is coming back to Eritrea, what are you going to do? Are you going to let him back into the country?

BBC: Does he face the threat of arrest if he comes back?

Yemane: not; he is not above the law. That is what I want to say.
BBC: Because that is extraordinary; somebody like him, well respected figure; somebody who is a legend in the liberation struggle; former defense minister! It is extraordinary that somebody like him and others who spoke out against the president now find themselves either under the threat of arrest or in exile or [inaudible] under detention?

Yemane: You don’t find it extraordinary that these people are also un, I umhh ahh mm, un er. Ennmmm involved in illegal activities or….

Yemane: Hang on. There is nothing extraordinary here. We have to find out what the problems are; what these people are after…

Yemane: I think it is a question of time.

Yemane needs time. Yes, time to produce an accusation. Right now, the G-1 is floating various possibilities: regionalism, defeatism, corruption, treason, and treachery. “Defeatism”, mind you, is a “belief”; it is an act. “Defeatism” is a Stalinist word that was used in World War II to ensure that the Soviet Army did not even entertain retreat and is consistent with Stalinist dogma that people can be punished not just for the things they do but the thoughts that cross their minds. It reinforces our belief that the PFDJ is still an unreformed communist-authoritarian system and that people are condemned not just for their deeds but also for harboring beliefs. As Mesfun Hagos said in one of his interviews, what penal code does “defeatism” fall in? And what shall it charge them with? “It is a question of time.” The G-1 has got all its errand boys testing out various theories and flamboyant stories: stories that cast the leader of G-1 as a heroic combatant and brilliant war strategist and the Reformers as frightened cowards and co-conspirators of the Woyane; stories that cast the leader of the G-1 as incorruptible and the Reformers as corrupt. From this grand menu of choices, the story that gets the most votes (in terms of mindless repetition by the uncritical masses) will be the one he charges them with. You see, Isaias IS a democrat who believes in choices. He does give people choices on how to frame people.

Asked about Mesfun Hagos, Yemane Gebremeskel says: “I don’t know why he left the country in the first place, if he wants to return he can return.” According to Mesfun Hagos (Source: news.asmarino.com Mesfin Hagos Interview, Part 3, Page 5 in Tigrigna), Yemane’s government knows why Mesfun Hagos left the country (“…I left Eritrea, with the permission of the government, because I had a medical appointment abroad.”) and what is stopping him from returning to his country (his passport was revoked.) Under these circumstances (where government officials lie even when they don’t have to), why would Eritreans have any faith in the government of G-1 to apply the rule of law, due process and acceptable court proceedings?