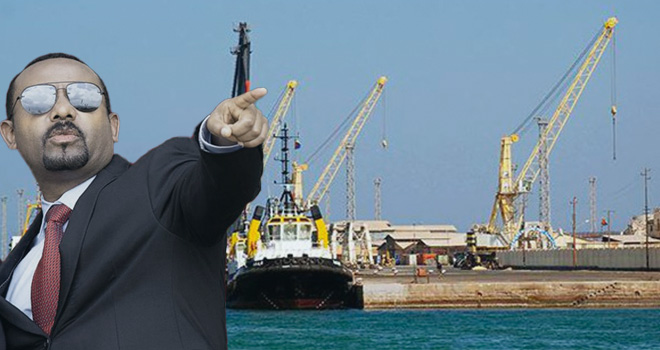 Last month the Ethiopian Federal Forces transported low-bed trucks loaded with tens of tanks heading towards the direction of Djibouti. The tanks were finally offloaded in Bure, a town on the Eritrean-Ethiopian border.

Some sources claimed the tanks were transported from Djibouti to Assab by sea and from there, overland through Eritrean territories to Bure, a distance of about 70Kms.

There is no explanation why the Ethiopian forces chose to take the tanks to Assab via Djibouti when they could reach Bure without leaving Ethiopian territories,

“Die for the Red Sea”

In one of his recent speeches, Prime Minister Abiy told Ethiopians, ‘If you want to die, die for the Red Sea.’ It’s not clear why he wants Ethiopians to do so because at the moment there is no conflict over the Red Sea.

An observer of Ethiopian affairs said, “there is no conflict over the Red Sea unless Abiy is planning to commit an aggression against Eritrea to take over Assab.”

Threatening Eritrean sovereignty by claiming Ethiopian rights over the Eritrean Red Sea, particularly the port of Assab, has been a traditional agitational message by the Ethiopian political elite. It’s commonly raised to appease and agitate the Ethiopian irredentist elite.

The Eritrean president in a close ally of Abiy Ahmed in the current Ethiopian civil war and has taken part in the war. However, “the Eritrean ruling party doesn’t raise such serious threats while it accuses its opponents of exposing Eritrean sovereignty to risks.”