PM Abiy: No Power and Cranes in Eritrea’s Port 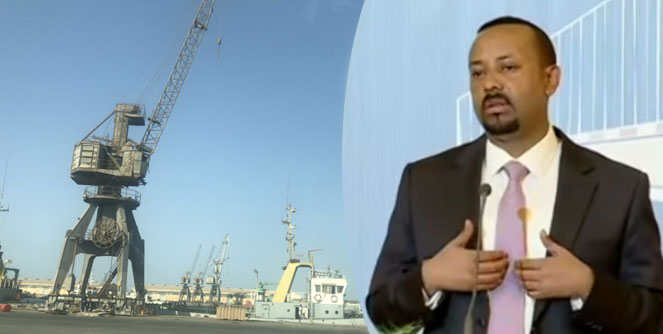 On September 5, 2018, Dr. Abiy Ahmed visited Assab, Eritrea. It was one of several visits he made to Eritrea since he assumed power in the spring of 2018.

Dr. Abiy Ahmed and Isaias Afwerki have met, in Eritrea and Ethiopia, at least ten-times during the last seven-months.

A website affiliated to the ruling party of Eritrea reported that the Ethiopian prime minister and Isaias Afwerki  “travelled 71 kilometers southeast to observe the highway … linking the port of Assab to Ethiopia.” The website added, “The highway and the port of Assab are expected to become fully operational in three months following the required renovations.”

According to a source who accompanied the officials on the road inspection trip,  “the ministry of information edited out most of the scenes of the eroded highway and left only a small stretch of the road that still had an asphalt layer to be shown on television.”

The website reported that, “Despite externally instigated challenges, the Government and People of Eritrea have continued investing on the port city.”

A Visit to Massawa

After spending the morning in the Assab region, the two leaders traveled to Massawa which is the second largest Eritrean port city.

The port of Assab and the road to Ethiopia have been neglected since the 1998-2000 border war between the two countries.

Last September, Ethiopian and Eritrean government media reported that the port of Assab and the road linking it to Ethiopia will be rehabilitated and be operational in three-months. Six-months after the announcement, the road and ports are yet to be repaired. And once the task begins, it could take many months more to accomplish.

Recently, PM Abiy disclosed that Eritrea doesn’t have the necessary funds to rehabilitate the port facilities and the highway to the Ethiopian border. He said the Eritrean government confirms that the “road is damaged, it hasn’t been operation for twenty years.’ And the officials say’, “the road needs design, … funds to repair it, …. [and] there is no power and no cranes [in the port].”

Last week, in a meeting at the ‘Sheraton Addis Hotel’, Dr Abiy Ahmed responded to different questions one of which was about the “Eritrean-Ethiopian peace agreement” that he concluded with Isaias Afwerki. Many Ethiopians and Eritreans have made charges that the peace agreement has not been institutionalized and there has not been much progress since it was signed.

For the first time in his response, PM Abiy acknowledged that he is dealing with a partner in the projects, whereas in the past his statements seemed as if “he spoke on behalf of both countries.”

The following is the English translation of part of Dr Abiy Ahmed’s explanation related to the use of the Red Sea port and the status of the road that links it to Ethiopia:

“…We want to use Eritrean ports, for reasons you know. When we request from the Eritrean government to use the ports, they say, the road is damaged it hasn’t been operation for twenty-years, we need to repair it, And to repair the road we need design, and we need funds to repair the road, the port wasn’t functional for twenty-years, there is no power and no cranes, we have to accomplish this and that, And that requires financing. We need to prepare.

When they say that, we have to prepare by repairing our [side of road] and we should not tell them to start with the available roads [they have]. There is no such diplomacy. If we can we help, we will provide financing, but commissions, on security, on economy, on diplomacy–a ministerial team has been set-up and they are working together. Numerous papers have been prepared–in case there is anyone who might be worried. Why is it that the issue of Eritrea and Ethiopia [is not dealt with] in a simpler way, [maybe] in six-months, in a quicker manner… I don’t know. Anyway, even if I don’t know to what extent it has advanced, the thinking might be…

Sudan [compared] to the past, for the last 20 years, the [kind of] relation it has with Ethiopia, it didn’t have for the last 100 years. It’s very strong [relation], consider it a family type [relation], There is a strong relation. But we have not solved our border problems [with Sudan]. It’s not solved, So, it is not that it’s solved with one [side] and not with the other. Regional power, regional relations, are strengthened, by… first, it’s internal peace, military power, economic growth, and also, not what we do out of excessive ego, but when we add to it our readiness to talk with respect . But with regards to our policy, as you heard me in my talks with the diplomats, it needs revision. It needs revision. It’s not neighbor-focused, but studied through forming a team, by organizing scholars. The government has ideas, it will make it participatory, and after we discuss the policies, it will be known as foreign policy.”