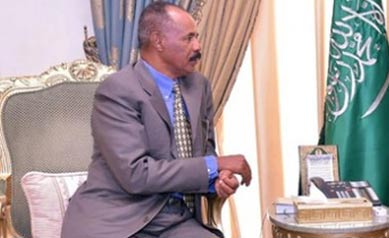 If you think the two quoted news items above are repeated, you are right in thinking so. However, the first one is from April 2008, seven years old, while the second is two days old, from April of 2015.

In April 2008, Isaias returned from his visit to Saudi Arabia empty handed. According to wikileaks, Isaias asked the Saudis “…for a donation.” King Abdullah’s response was “we’ll see.” Isaias then asked for Saudi investment in Eritrea. King Abdullah wondered if the Eritrean economy was open enough to enable a fair return on investment…” The USA diplomatic cable also explains that, “the door [to Saudi Arabia] was previously shut for Isaias; now it is open, but just a crack.” He said “Isaias was at his silver-tongued best in buttering up the king on Saudi Arabia’s diplomatic skill and regional clout, just before hitting the king up for a cash donation. ”

Upon returning to Eritrea, the humiliated Isaias wanted to slap the Saudis and he reached out to Omer Al-Bashir of Sudan who helped arrange a meeting for Isaias with the Iranians only a month later. Between May 19-20, Isaias made a state visit to Iran and met “Iranian President Ahmadinejad and Ayatollah Ali Khamenei.”

Isaias believes the Saudis were cold to him because the USA ordered them to be so.

In March 2014, Gedab News reported about the bad relations between Saudi Arabia and Eritrea. Dr. Ahmed Dehli who accompanied Isaias to Qatar had complained about Prince Turki Al Faisel, Saudi Arabia’s former (until 2001) Director of Intelligence, regarding the accusations lodged by Saudi Arabia and Yemen against the Isaias Afwerki regime for being a conduit to the Iran-backed Houthi rebels in Yemen. And Isaias has complained to the Qataris that the Arab Gulf States were punishing him for his close relations with Qatar and that Qatar should compensate him for that.

The Saudi Door is “Open, but Just A Crack”

Isaias’ visit of to Saudi Arabia started on Tuesday, April 28, and ended on Wednesday, April 29. 2015, but it didn’t get much coverage in the Saudi press because it coincided with major changes within the Saudi government. For the first time, King Salman appointed King Abdulaziz Al Saud’s grandchildren to top positions and literally ended the reign of the older generation of Saudi princes, the children of the founder of Saudi Arabia, King Abdulaziz Al Saud.

Also, for the first time since Saudi Arabia was established in 1926, the king appointed a foreign minister from outside the royal family. Adel bin Ahmed Al-Jubeir, the previous Saudi ambassador to the USA replaced prince Saud AlFaisel, the outgoing foreign minister who held the portfolio for forty years. the Saudis were busy absorbing the drastic and sudden changes that King Salman introduced, in addition to the “AlHazm Storm” campaign against the Houthis of Yemen. Isaias’ visit was not that important.

For Prince Mohammed bin Naif bin Abdul-Aziz who was appointed crown prince on Wednesday, he started his new job by meeting Isaias Afwerki. A Saudi official commented, “I am not saying it, but some people may think that is a bad omen.”

Isaias has been trying to find a way to get financial aid from Saudi Arabia for a long time to no avail, he found the current crisis in Yemen an opportunity to ask or blackmail the Saudis.

In March when the Saudis were busy assembling the coalition for the air campaign against the Houthis in Yemen,  Eritrea asked for a meeting with the Saudi government through its ambassador to the Kingdom of Saudi Arabia, Mohammed Omar Mahmoud who delivered a letter to that effect to the then Crown Prince, Muqrin bin Abdulaziz Al Saud. A few days later the Saudi air campaign against the Houthis started as reported by Gedab on March 28, 2015.

Days into the campaign, Yemeni officials accused the Eritrean government of having ties with the Houthi rebels; in an unprecedented move, the Eritrean government issued a press release denying the Yemeni allegation. Eritrea is not known for replying to accusations that quick, or in that detail. Its motto in replying to such events is, “we prefer to be quite” –in a local language: sq kn’bll meritsna!

What did Isaias get from the Saudis?

The Saudis are concerned about the African shores of the Red Sea and do not want to worry about what the unhinged regime of Isaias Afwerki might bring them–they have decided to keep him on a short leash.

The Awate Team is a group of individuals who collaborate in preparing editorial contents that mainly appear under the PENCIL signature and other columns that carry the Awate Team signature. It represents the collective team's view.
Previous Sudan: Al Bashir Wins Election As Expected
Next Rallying Eritreans Around One Cause