Ethiopia: The Seven Sleepers Of Ephesus Are Eight 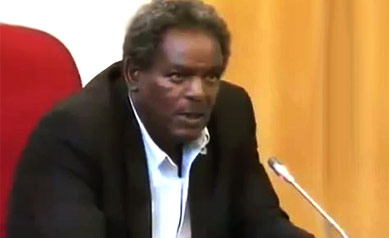 The exact number of PFDJ members who have been calcified since the end of the 1980s is not known but there are a few of them. In fact their leader has turned into a pillar of salt.

The EPRDF is in a relatively better position, because it introduced an honorable exit for many of its veterans; in fact, TPLF recognized its elders and founders in the recent 40th anniversary celebrations. The EPRDF policy of “metekakat [renewal/ replacement]” of public servants and leaders is quite visible, except in a few cases where one is reminded of the biblical story of “The Seven Sleepers of Ephesus,” and its Quraanic equivalent “ahl al kahaf [The People of The Cave]” who woke up from their sleep in a cave after many generations, to discover that the religious persecution they fled from and were hiding to avoid has long stopped.

Recently Ethiopians and Eritreans discovered the sleepers were actually eight. The eighth sleeper just woke up and his name is Abbay Woldu, the governor of the Ethiopian state of Tigray.

Happy anniversary to the people of Tigray is in order; they earned the celebration with their blood, their heavy sacrifices.

Only the dishonest denies the development and economic strides that Ethiopia under the EPRDF is making. However, would anyone expect Ethiopia to be completely out of poverty and stand at par with the developed world in a decade or two? Not at all. But the country has firmly planted its feet on the road to prosperity. With a consistent development drive and a few decades more, there is a big chance that Ethiopians would be completely out of the African pit of poverty. So far, the country has almost made sure the degrading famine of the 1980s will not be repeated and that the image of bloated children crawling behind skeletal mothers, will be confined to libraries–kept in the archived films of the Jonathan Dimblebys of the world.

Both Ethiopia and Eritrea are criticized about their governance by many, though it is relative. Very, very relative. However, a single concept of good governance and a universally agreed upon measure doesn’t exist; judgments vary depending on credible, or amateurish indexes. To determine if a country has good or bad governance, people can take a yardstick of their choice and arrive at their own conclusion. But generally one can use the yardstick of the developmental model of banks (IMF, World bank, etc,) that focuses on economic institutions and public sector management and leadership, or the model of the political institutions (UN, EU, etc,) which focuses on democracy, election, human rights, freedom of expression, etc.

The African Union seems to be interested only in stability, while the armies of NGO’s have motives and goals equaling their numbers–the worst of them are those who are primarily interested in king-making. But for the people of the Horn of Africa (and many others), good governance is measured by the degree of adherence to “The Leave Me Alone Doctrine.” That is followed by the level of all types of security, and importantly, by the degree of justice (personal and communal) that the people enjoy.

There are enough pulling elements within both parties who think the best governance practices should be sourced from Dedebit and Sahel, the TPLF and PFDJ reference points respectively. There is relatively less pull factor within the TPLF towards Dedebit, but the PFDJ is firmly anchored in the Sahel mentality and refuses to spring out of it. That is why the PFDJ runs Eritrea like a garrison.

That much is enough for the purpose of this article, which is supposed to explain the mindset of the eighth sleeper in the cave. It is the most serious threat facing Eritrean justice seekers who are alerted to remain paranoid and vigilant the minute they think of looking forward.

Three days ago, the TPLF celebrated its fortieth anniversary, which was a grand event fit for the occasion. Ethiopians, particularly the people of Tigray, deserve to celebrate. Unfortunately, judging by the views and belligerence of some veteran TPLF leaders, one is hard pressed to find differences between them and the PFDJ. It seems God created them from the same batch of clay.

The people of Eritrea and Tigray are proud of their struggle-era legacy and its noble ideals: selflessness, dedication, perseverance and courage. The two parties that led the struggle had a close relationship, though occasionally it was bumpy. Internal conflicts within the two parties existed, mainly on how to move forward. While in Ethiopia the forward-looking wing triumphed, it is the brutes and violent militants who came out victorious in Eritrea. In Ethiopia, the vanquished wing licked its wounds and was forced to adopt. Those who rejected change continued to play in the margins and raise issues–covert and overt threats–mainly targeting Eritrea. Alas, they include decorated veterans of the struggle era.

In Eritrea, members of the various vanquished wings are either rotting in jails or have disappeared from the face of the earth. No one is allowed to even play in the margins; one has four choices: rot in jail, disappear, be exiled, or live like a puppy on the laps of Isaias. There are prominent personalities that any Eritrean can name in all four categories.

Eritreans consider the Ethiopian vanquished wing a risk to their country. That wing includes those who openly campaign to re-conquer Eritrea, to disintegrate it, or to perpetually humiliate it. To many, this might be considered a perfect example of paranoia that inflicts Eritreans. Sometimes it’s not.

In his speech on the fortieth anniversary of the TPLF, Governor Abbay Woldu had this to say:

“During the 17 years of popular struggle, since the sea of reactionaries was wide, there was no one who didn’t attempt to annihilate this [TPLF] democratic organization… [Derg, EPLF, EDU and a host of others are mentioned] Jebha, supported all reactionaries to annihilate us, but in the end, it fell in [the fire], was charred, and disappeared.”

Was there a need for such bitterness and grudges carried for almost four decades to be mentioned by a statesman, in a celebratory event, even if it was completely true? Forget the Eritrean “Jebha” that the TPLF interfered to liquidate in its own country, in collaboration with today’s rulers of Eritrea; wouldn’t a show of magnanimity elevate the stature of the governor of Tigrai? Isn’t it time that such speeches, that are heavy on “Cadre Vernacular,” are better left to college activism, and history is better left to scholars, research centers, and universities? Why would a statesman speak like a radical student activist heavily sprinkling his speech with bygone terminologies?

In a recent Facebook entry, an Ethiopian intellectual reminded his leaders the following: “…our attempt to bring (the values) of Dedebit to Mekele should not take Mekele back to Dedebit…”

Dedebit and Sahel are the springboards that the TPLF and EPLF launched their struggle from. Both people hold those places in high esteem. However, they don’t want the environment that was prevalent in these places during the armed struggle, to intrude, or be reintroduced to their independent countries, in their civilian life.

For Eritreans, the military rule and the ruthless security apparatus of Sahel has been successfully transplanted in “independent Eritrea” though the people hoped it will be relegated to history books and museums. At least Ethiopians are talking openly about it, warning their people of over indulgence in adulating those places, fearing the risks that old wounds would be poked and made to fester, and the path to normalcy would be hampered.

The TPLF crowned its struggle with victory, and it has a lot of exhibits that shows its achievements. There is no need for cheap jabs here and there. It’s not wise, or reconciliatory, to expect Ethiopians who were part of the Derg, EPRP, EDU, or other groups, to feel ashamed forever. Does such a spiteful speech characterize a victor or a bitter loser? Magnanimity is the weapon of the wise. For justice seeking Eritreans, the way the cadre-minded governor described the incident of the early 1980s is bothersome.

If the quote above was shown to any Eritrean or Ethiopian, they will not be able to tell whether it was uttered by Isaias or Abbay Woldu! Both describe the historical events in identical ways–delivery and content. And knowing the strategic interest of Ethiopia in Eritrea, that attitude is bad. People of the region (let alone their politicians and leaders) know that the terms “Jebha” and “Sheabia” are loaded; they carry other divisive connotations, and the TPLF knows that very well. Tickling that raw nerve and arousing it is a favorite pastime of both cadres of the PFDJ and some TPLF. It is a pity the late PM Meles didn’t drill in them enough wisdom regarding the issue, but then, maybe they were so thick headed to learn!

At times like this, Eritreans, as they wish for peaceful relations with their neighbors, pose a critical question: is Abbay Woldu likely to be comfortable with an Eritrea that is governed by any other Eritrean party except the PFDJ, or its clone?