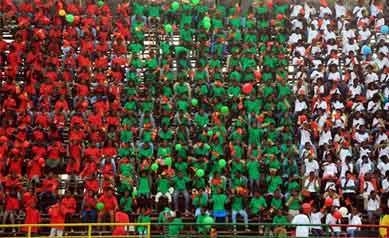 On Wednesday (February 18, 2015) all roads in Ethiopia seemed to lead to one spot – the newly constructed Stadium in Mekele city, Capital of the Tigray Regional State in the northern part of the country.

Since dawn, residents flocked to the 60,000-capacity stadium which soon was packed to the full. Outside the stadium, millions participate in the several events befitting the 40th anniversary of the Tigray People’s Liberation Front (TPLF).

Inside the stadium, the TPLF chairman Abbay Woldu was busy receiving dignitaries and they came in droves too.

The Chairperson of the African Union Commission Dr. Nkosazana Dlamini Zuma was also among the dignitaries attending the 40th TPLF anniversary.

Forty years ago, 11 men having seven rifles took to the woods to start the fight against Africa’s most armed force, the army of the Marxist Dergue regime, and it grew rapidly in a popular struggle. And 17 years down the line, the struggle that began in such a humble, but most determined way, mustered millions across the country leading to the downfall of the Dergue regime.

The coats the dignitaries wore and the coverlet (a piece of cloth combatants used to wear while fighting) they put around their necks evoked the mood of the early days of fighting. Everything else however changed for the better, including the very stadium that serves a venue which is the result of 24-years of peace achieved after the downfall of the Dergue regime.

And the coverlet was reminiscent of the struggle not only in Ethiopia but also farther north by Eritrean combatants, who unfortunately could not reap the results of their bitter struggle. Now not more than a necktie, the quilt served to wrap dead combatants with during the armed struggle, and it is known throughout the region including farther north and as far as people in Yemen.

“…Renaissance is very imminent in Ethiopia to date,” said Dr. Nkosazana Dlamini Zuma, the Chairperson of the African Union Commission in her address to the joyous gathering.

“Renaissance is there for all of us to see,” she said.

But the tone and mood of the celebration by far and large was forward-looking. It projects for not only a prosperous and unified nation, but also an economically integrated region.

All the leaders of the region including the Somalian President and Djiboutian Prime Minister shed light on the practical activities being implemented towards that end and this same theme reverberated by all others. Ethiopia to date, it seems, has become a center stage where the regional agenda springs.

Somali President Hassan Sheikh Mohamud said “enmity has come to an end and we would like to work in collaboration with Ethiopia. Ethiopia has contributed to realize a stable Somalia.”

Sudanese President Omar al-Bashir on his part said “we open a wide horizon for cooperation in all fields between our countries and we have shared goals in all fields.”

“The economic integration between the two countries will be realized through network of infrastructure including roads, railways and electric power.”

Ugandan Prime Minister Ruhakana Rugunda picked up on this idea and said that “we should make use of our resource to realize regional integration as this is part of the plan of IGAD.”

Djiboutian Prime Minister Abdulkadir Mohamed “we will work to further intensify solidarity between the two people.”

“The Mekelle-Tadjoura railway will contribute to integration of the two peoples,” he said.

President of Rwanda Paul Kagame said “we, Africans as some say cannot rely on ourselves but we could more than we can.”

“Africa as a whole found Ethiopia as an important voice. Ethiopia contributes to peace and development through its peacekeepers and ideas, which Rwanda feels proud of,” he said.

TPLF began its armed struggle when a group 11 took it to the woods carrying seven rifles, and TPLF was founded at a place called Dedebit in the state in 1975.

After seventeen-year long guerrilla fighting, TPLF, sardonically called Woyane was able to oust the tenured Dergue military regime in 1991. The regime which was highly equipped with modern ammunition and able to mobilize nearly 500,000 army had been seemed hard to confront with. It has waged several military campaigns to demolish the small number of TPLF fighters.

After the downfall of the Dergue regime, TPLF and its affiliate parties formed stable transitional government that ruled the country from 1991-1995.

The highlights of the anniversary celebrations in the stadium were the recognition given to the early day’s combatants, dead or alive, as well as the people who appeared with framed photos of their sons and daughters sacrificed for the cause.

Eternal respect for them!

By: Mohammed Taha Tewekel, with additional reporting by Seleshi Tessema