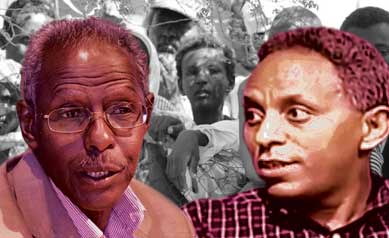 On November 23rd, Tesfa News website reported that the charge d’affairs of the Eritrean embassy to the United States, Mr. Berhane Gebrehiwet, had told a gathering of Eritreans from the United States that Eritrea’s compulsory national service, where Eritreans have been pressed for military and “national development” service for over a decade,  would be restored to its original practice: 18 months.

Whether this announcement is true or whether, like many announcements made by the Eritrean regime, it is false hope designed to buy itself some time or, even worse, a message telegraphed for an external audience only, has been the subject of discussion among Eritreans.

The evidence strongly points to the latter, and here’s why.

The Eritrean government owns all media in Eritrea: TV, radio and print. One would expect that news of this magnitude, which will affect the lives of hundreds and thousands of Eritrean youth and their families, would be announced on all state-owned media. However, since November 23rd, there has been no report at all. Moreover, the news was reported in Tigrinya only, to a closed group of Eritreans, and reported by a very government friendly (owned?) Website famous for reporting the twitter feeds of government officials as “breaking news.”

2. Where Are The Details?

The reportage provided by Tesfa News is heavy on explaining why, from the perspective of the Eritrean regime, the national service was extended from 18 months to its current open ended commitment;  but it has no information on when this change is supposed to take place and why it is taking place. The government congratulates itself for overcoming challenges thrown its way and it explains that one way it was able to overcome the challenges posed to it from its enemies was by extending the military service indefinitely. Does this mean the government has defeated its enemies? Wasn’t it using the strained relationship it has with Ethiopia and the lack of having demarcated borders as a reason for pressing the young into endless service? None of that has changed, so why the change in policy?

As mentioned, Berhane Gebrehiwet is the charge d’affairs of the Eritrean embassy to the United States. Wouldn’t news that will affect the lives of hundreds of thousands of Eritrean service-men and women be reported by the Ministry of Defense? Since the “national service” begins with students attending their 12th grade at Sawa military camp, wouldn’t the Ministry of Education have a say in this? Since these are all youth, wouldn’t the TWO youth organizations (YPFDJ and NUEYS) have any comment on this development?

While the seminar of Berhane Gebrehiwet in the United States can be rationalized (Eritrea and the US do not have representation at the ambassador level), what is curious is why he conducted a “seminar” in Europe in early to mid November.

Eritrea has fully-accredited ambassadors to Italy (Feshazion Petros), Germany (Petros Tzegai), United Kingdom (Estifanos Habtemariam) and the European Union (Negasi Kassa.)  It has a charge d’affairs to Sweden (Yonas Manna.) Yet, as another pro-government website, alenalki, reported, it was Berhane Gebrehiwet, all the way from the United States, who was conducting “seminars” in Stockholm, Oslo, Copenhagen, etc from  November 9 through the 16th.  Why?

All Signs Point To: It’s A Ruse

A man with no government portfolio, Yemane Gebreab, the political director of the ruling party, is in charge of being the liaison with both UN bodies and crafting the Eritrean regime’s message.

In 2014, for the first time since it has been in power, the Eritrean regime disclosed how much money it received from the “2% Diaspora Tax”–not to the Eritrean people, but to the SEMG. Similarly, now, it appears its getting ready to send the message to the Commission on Inquiry, that it is about to restore the national service from a life term to 18 months.

Berhane Ghebrehiwet, a trusted protege of Yemane Gebreab, has been chosen for this task.

How this affects the relationship between the Eritrean ambassadors to European countries and their constituents; how it makes them feel to be upstaged by a “charge d’affairs” from the United States when they are full ambassadors; how there has not been a single circular sent to a single Eritrean ambassador anywhere as Berhane Gebrehiwet roams around and passes Yemane Gebreab’s message to the SEMG and the COI; or how this gives false hope to the long-suffering Eritrean youth, is of least concern to the Eritrean regime and its apologists.

Incidentally, it is this kind of rogue diplomacy that led to the rift among the PFDJ in 2001, between the G-15 and the G-1.

Whenever it is under intense pressure, the Eritrean regime mouthes off one liners–We will draft a new constitution! We will conduct political reforms! We will demoblize!–which have no time frame, no institutions, no budget. This latest announcement by Yemane Gebreab, c/o Berhane Gebrehiwet, appears to be more of the same.

The Awate Team is a group of individuals who collaborate in preparing editorial contents that mainly appear under the PENCIL signature and other columns that carry the Awate Team signature. It represents the collective team's view.
Previous Nevsun Settles Two Fraudulent Class Action Lawsuits For A Total Of US$ 12.8 Million
Next Minister Nesredin Bekit And More Red Tape On Imports