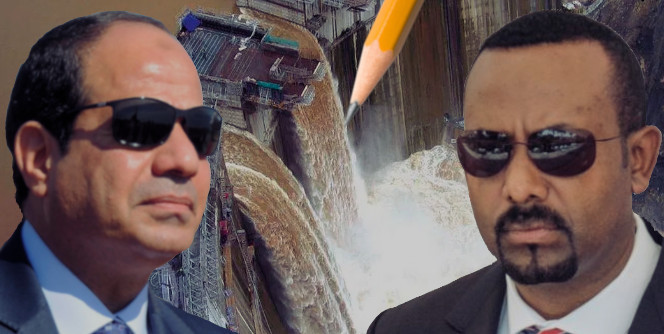 The embattled Egyptian president AlSisi has resuscitated the Nile water crisis with Ethiopia. The differences over Ethiopia’s Great Renaissance Dam (GERD) that started in 2011, has sometimes bubbled and in other times erupted to the surface. When it did, it was often downplayed by occasional diplomatic niceties or escalated through media forays. But since the summer of 2018, it seemed as if it was contained.

However, in his September 24 speech at the UN General Assembly in New York, president AlSisi called on the international body to intervene in the GERD issue confirming the crisis between the two countries is far from over. He also warned the stalled negotiations could have negative repercussions on the national security and development of Egypt. GERD, or “Sed AlNahda” in Arabic, has become one of the main political rallying issues in Egypt.

After months of deadlocked negotiations between the two countries to resolve their differences, in June 2018 the Ethiopian prime minister Abiy Ahmed made a two-day visit to Egypt to conclude a resolution of the dispute. His visit followed the establishment of a joint Egyptian-Ethiopian scientific committee to handle the issue. Before concluding his visit, Abiy Ahmed had assured president AlSisi that the dam will not harm Egyptian interests.

At a press conference, AlSisi asked the visiting PM to swear in the name of God that Ethiopia will not decrease Egypt’s share of the Nile waters. Abiy Ahmed swore in Arabic repeating after AlSisi. “Wellahi, Wellahi … we will never harm Egypt and will work to increase the Egyptian Nile water quota.” As a bonus, Abiy Ahmed returned home with 30 Ethiopian prisoners who were languishing in Egyptian immigration jails.

The Egyptians seemed content with Abiy’s public promise until a few weeks ago when opposition to AlSisi gained steam, and finally led to popular demonstrations charging AlSisi’s government of corruptions and scandals.

Lately, in support of the anti-AlSisi demonstrations that started two-weeks ago, Egyptian comedians have picked Abiy’s pledge as a juicy material for their shows: “AlSisi is so-pious he handles foreign relations based on Welahi-welahi!”  On the opposite side, the battery of Muslim and Christian clergy has thrown its sermon power behind AlSisi and the state-owned media has been magnifying the clergy’s support statements.

On Friday, September 20, Egyptians took to the streets and demonstrated in a manner reminiscent of the 2011 demonstrations that ousted the 30-year old Mubarak regime. In relation to the GERD issue, the political class is “accusing AlSisi of succumbing to international pressures and giving in to the Ethiopian demands.” But now, AlSisi himself has adopted the same position regarding the GERD and is calling for the internationalizing the Nile Water crisis.

On Friday, September 27, AlSisi returned from New York to Cairo where many Egyptians were demonstrating to remove him from power. There was a heavy security force presence as thousands of plain clothed and armed officers fired tear-gas to disperse the demonstrators. And the streets  leading to the Al Tahreer Square, the main venue of the 2011 demonstrations, were closed off. Reports indicated the police have arrested thousands of people from all over Egypt.

The recent protests were called and inspired by Mohamed Ali, an Egyptian businessman who has become the fiercest critic of AlSisi’s government. He has been uploading daily video clips instructing and planning the demonstration from his hideout in Spain. Many other exiled Egyptians has also joined him with their own colorful and varied shows uploaded to the Internet daily.

AlSisi, came to power in 2013 after ousting Mohamed Mursi, the first ever democratically elected Egyptian President. Last June, Mursi who has been in jail since his ouster, collapsed and died in a courthouse.

From South of Lake Tana to the Mediterranean Sea

The Blue Nile, on which the Ethiopian GERD is built, flows from the south of Lake Tana in Ethiopia, and through the Sudan to Egypt and finally it drains into the Mediterranean Sea. Almost all of Egypt’s 100 million people are crammed along the Nile valley that snakes through the desert for about 900 miles before it reaches the Mediterranean Sea through the Nile Delta. From Sudan, the Nile flows into Egypt through the Aswan High Dam which holds 132 cubic kilometers of water.

The Nile finally spreads into the rich agricultural region of the Nile Delta and the Mediterranean coast that stretches for 250 kms from Alexandria in the west to Port Said in the east.  It’s Egypt’s only lifeline and provides 95% of its drinking and agriculture water needs. A 1929 and 1959 colonial agreement grants Egypt rights over 87% of the water and the final say on any Nile water related projects in the upstream countries.

The GERD negations between the two countries has started in 2012 right after Ethiopia decided to build the $4 billion dam. Negotiations are now stalled due to Egypt’s demand to make changes to the dam filling timetable, a decision that Ethiopia considers a potential violation of its sovereignty.

Recently, the Egyptian minister of water resources handed his Ethiopian counterpart Egypt’s final proposal of seven years to fill the dam. However, Ethiopia wants to fill the dam in three years and  insists that the Egyptian vision would “prolong the filling of GERD indefinitely” while compensating for the Egyptian water deficit by using the Aswan High Dam as a second backup reservoir.  But Egypt fears its 55 billion cubic meter share of the Nile water would be affected depending on the time it takes to fill the dam. It proposes the dam should be able to release “40 billion cubic meters of Nile water annually to downstream countries.”

The recent crisis was triggered by Ethiopia’s rush to complete the construction and commission it by 2020, when, the GERD, according to the Ethiopian authorities, is expected to start generating power. However, the current Egyptian escalation became evident on the Sept. 14  annual National Youth Conference, where AlSisi said Egypt has been  paying a price “since 2011 for one mistake …  and will continue to pay”, blaming the Arab Spring demonstration that ousted President Hosni Mubarek and brought in President Mursi. He said, “Dams would not have been built on the River Nile … was it not for 2011,”

The GERD, located about 25 kms from the Sudanese border in Western Ethiopia, is 1,800 kms long and 155 meters high, with a water storage capacity of over 10 billion cubic meters. It will be the largest dam in Africa.

In July 2018, the body of Simegnew Bekele, 53, the chief project manager of GERD, was found shot in the head and a pistol was found beside his body, inside a car in a busy street in Addis Ababa.

In August 2018, the Ethiopian government fired METEC, an Ethiopian government concern (a GERD contractor), over corruption charges. Ethiopia replaced it with “Voith Hydro Shanghai”, a Chinese company, and signed a $113 million agreement with it to continue the “electrical, mechanical, and various civil and structural works required to finish the GERD”.

The Italian company, Salini Impreglio, is still the main contractor of the GERD construction.

Meanwhile, according to reports, Israel has denied it supplied Ethiopia with an air defense system to protect the GERD.