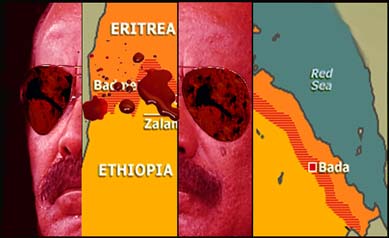 (The following is from the archives, it appeared on November 5, 2005.)

“I have to state with much regret that your good self, and the Security Council, has forfeited your relevance on the very issues raised in a rather habitual manner, in your letter.”

The above is an excerpt from a letter that Isaias Afwerki wrote UN’s Kofi Anan.  One reporter described the Isaias letters as “oddly-worded” a failure on the part of the reporter to appreciate Eritrean politics:  in Eritrea, any Eritrean who falls out of favor with Isaias Afwerki is a “weyane” who instantly loses his citizenship and his right to have a stake in Eritrea, and a right to liberty or life.  Isaias Afwerki is simply extending that treatment to foreigners: he is calling Anan, the UN and UNSC “Weyane” and telling them that they have lost their authority—legal and moral—to comment on Eritrea, period.

Why the tone and why now? We can think of three possibilities.  First, the obvious, Isaias was having a bad day and was merely expressing his frustration.  A second possibility is that it is a stop-me-before-I-shoot letter, an attempt to place an issue that has been in the back-burner for so long to the front-burner.  The third possibility is that it is the real thing: Isaias is telling the world “you’ve had your chance, three years and counting, and now I am going to take matters into my own hands.”

There are big risks for Eritrea with all three, but what else is new for a nation ruled by an absolute tyrant?

I . Diplomacy of Impulse

Isaias Afwerki has a long history of shooting his mouth off—to the Organization of African Unity, to the Arab League, to the UN, to journalists—and it should come as no surprise that he would shoot his impulsive mouth to the UN, the State Department and the Security Council as well.

This behavior of Isaias Afwerki may relieve him of his frustration and endear him to his fans whose outbursts makes them feel empowered, but it is being done at considerable expense—presenting Eritrea as a nation governed by amateur diplomats where outbursts substitute for well thought-out recommendations.  If the UN fails to act, and Isaias Afwerki does nothing, he presents Eritrea as a paralyzed nation that is big on bluster; if, on the other hand, the UN fails to act and Isaias Afwerki feels compels to act, it exposes Eritrea to risks because his actions will be based on impulse.

Notwithstanding a couple of non-binding resolutions read at the Capitol to an empty audience, the Isaias government has not had much luck in lobbying the United States government.  It was paying the lobbying firm Greenberg Traurig $50,000 a month for years now on the strength of super-lobbyist Jack Abramoff who was charging the mega-fees on the strength of his connection to US super-congressman (and majority leader) Tom “The Hammer” Delay.   Jack Abramoff has been indicted on charges of corruption and Tom Delay stands accused of conspiring to launder money and has resigned from his post.

One explanation for the escalation by Isaias Afwerki is that it is directed at the United States and particularly its ambassador to the UN, John Bolton, who is reputed to be a man of little patience for the infinite patience of the UN.   The optimists may argue that this strategy of escalation will bear fruit and result in the UN/US putting its full weight behind the EEBC ruling.  But it is equally likely, if not more so, thatBolton will come to understand the limits of the US Big Stick, and there is precedence for this:

The last US ambassador who enjoyed the reputation of Bolton for being blunt, straight-shooting and results-oriented was Richard Holbrook.But when he and his  team (the entire Security Council) visited Eritrea and Ethiopia to avert certain war in May 2002 and they were told “no!” by both Eritrean and Ethiopian leaders, the diplomats returned empty-handed.

John Bolton’s boss, the Secretary of State, issued a statement through a spokesman, Adam Ereli, which urged both nations to peacefully accept the legally binding boundary commission’s report that granted the disputed town of Badme to Eritrea. The State Department is also calling on the Eritrean and Ethiopian governments to hold talks on resolving their disagreements.

In other words, more of the same.  Not surprising, given that the Isaias regime, as recently as yesterday, blamed the State Department for the violence in Addis Abeba, Ethiopia.

The third possibility is that this is, as Isaias explained in a subsequent letter, not posturing but actual notice that Eritrea is about to take measures, including military, to reclaim land awarded to it by international law.

There is enough evidence to make the argument that this is the case, if one were so inclined.  It is a fact, as reported by Gedab News in summer, that he had presented a “seminar” telling his flock that war is imminent.  It is also a fact that the Ethiopian government is going through a political crisis that may create a “perfect storm”: an emboldened opposition refusing to settle for half-a-loaf of bread and pursuing a policy of destabilization as well as a donor nation group that has demoted Meles Zenawi from his African saint status. This may have convinced Isaias that this is the right time to strike—start something and wait for the Ethiopian opposition to finish it.  Moreover, in an attempt to avert a common criticism from the 1998-2000 war (that Isaias plunged the country to war without advising anyone), he has presented a “white paper” to his council of ministers which, among other things, argues for war.  Don’t complain later that you were not advised, seems to be the strategy.

The objective of this war would not be to conduct a frontal attack and reclaim Badme—because PFDJ knows that it is one thing to liberate land quite another to hold on to it–but to create so much instability and chaos in Ethiopia that Meles Zenawi would have no choice but to sue for peace, the price of which would include a return of the occupied territories.

We cannot even begin to list the folly of this strategy since it depends on so many variables most of which are either unfavorable or unknowable to Eritrea.

The alternative to war is to do what people do when they are not fighting: to talk.  This discussion can occur in a proxy meeting, proximity meeting, teleconferencing, face-to-face, whatever shape it takes, there must be a discussion that is based on the decisions of the EEBC.

The two countries have reached agreement on 80% to 90% of their bloody dispute.  It would be cruelty on massive scale to disregard this achievement and wage another bloody war to resolve the minor dispute—cruel because of the lives that will be disrupted and destroyed and cruel because the war will not help resolve the 10%-20% dispute but it will actually place in danger the agreement already reached on the 80%-90% of the dispute.