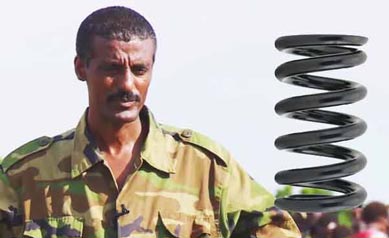 I am sure you heard that Mola Asghedom who was on a ten year visit to Eritrea decided to leave his guest camp and return to Ethiopia. I am not sure of his title, but Eritrean Arabic websites refer to him as “General Mola Asghedom”. Why not, anyone who commands an army thousands of soldiers strong is fit to be a general. But since I didn’t hear the Ethiopian media refereeing to him as such, I am not sure how to refer to him, I will just call him Commander Mola Asghedom.

Yesterday I finished going through the last of the clips of his interviews that I had saved. Honestly, I am convinced he is not a general; no general is that articulate. Regardless of his past relations with Isaias, I decided to look to the future and not dwell on it because I was touched by the way he respected the Eritrean people and the high regard with which he remembered my people. Anyone who describes Eritreans in that way has to be a good man—unlike Isaias who never mentioned Eritreans by name, just “Izzi hzbi, ‘zi…”

In almost all his interviews, Commander Mola Asghedom made sure to mention that his army faced tough resistance when leaving Eritrea, and that it “broke the enemy lines…” and entered the Sudan. The enemy is the PFDJ; it is amazing how an ally can become an enemy in one day. And the excited Ben spiced it up a little; he said, TPDM “pushed the Shabiya army through the border, and then destroyed it and returned to their country.” Termsms is the Amharic word he used. Therefore, all opposition to the PFDJ should rejoice, Shabiya army is destroyed, Ben has confirmed that.

Blame it on the Italians, whenever Eritreans hear “Mola” they make a mistake and visualize Mola, you know, the metal spring that the Italians taught us it’s called Mola. Okay, Mola sprung out of Eritrea because he couldn’t possibly penetrate the well-guarded Eritrean borders, he must have jumped over the border guards, that is if Ben’s explanation doesn’t appeal to you. But for now, forget what Ben said. Adoulis.com reported that a high level Eritrean security team had arrived in Khartoum on Sunday. If that’s true, I believe they are there to discuss ways to have Mola Asghedom and his army extradited back to Eritrea because they are naturalized Eritreans—they have passports and ID cards that they issued to TPDM to prove they are Eritreans. They insist that Ethiopia, in contravention of international law, particularly its PFDJ doublespeak translation, has kidnapped its citizens, the TPDM.

The Ethiopian Prime Minister can threaten all he wants, but Isaias is rebuilding what is left of the Ethiopian opposition forces—the Gambella group has now increased by 1000%, to ten people. The Afari group that Mola said couldn’t bring one person is now an army of four people. Two brigades of the Eritrean army has replaced TPDM forces that were kidnapped by Ethiopia, until EPRDF extradites them, including Mola Asghedom.

An Opportune Time For The Eritrean Opposition

There is a great opportunity and the Eritrean opposition should make its move fast. The Sana’a Forum, which is supposedly a clearing house set by Yemen, Sudan and Ethiopia to deal with the Eritrean opposition transactions is now a forum without Sudan and Sana’a—the president of the last one, Ali Abdella Saleh who made the deal, is now a fugitive and I don’t think any of the two contending Yemeni presidents, Abdo Robbo Mensur or Abdulmalik AlHouthi, know anything about the so-called Sana’a Forum. That’s is because so many seasons have passed since it became an Ethiopian sole proprietorship, and that is why I refer to it as such.

Oh, the move! The election for the position of governor of the Sana’a Forum, I mean the Ethiopia Forum, is due, or should be due—the term length is not spelled out but assumed because it has been a while since the last election. I will campaign for commander Mola Asghedom to run for the office of the governor of the Ethiopia Forum in the next (upcoming?) election. Why not? He loves Eritreans, he knows the ins and outs of Eritrea and the secrets of the ruling party. He knows the mettle of the “patriots” from Washington DC who are being fattened by Isaias to overthrow the EPRDF, and annex Eritrea to the Ethiopian Empire. And as a military commander, Mola doesn’t seem he is due for retirement any time soon. Provided he has a sense of humor, and he is not stiff, I am supporting Mola Asghedom for Sana’a Forum! I mean, Mola Asghedom for Ethiopia Forum!

If elected, I think Mola would vacate the Ethiopia Forum offices in Addis Ababa and move them up North, close to his camps in Eritrea that he left ten days ago. He knows how to organize an opposition force and he can help the few dozen Eritrean squads get organized. Importantly, he has an experience with the sort of opposition organizations that could not bring four people to a resistance army—he would identify the two-man and four-man Eritrean groupies that are wreaking havoc in the opposition. I think he will set strict benchmarks (and retirement benches) to help reorganize, and reorient the Eritrean opposition to the direction of Eritrea—reminder: from Addis, it is North, just in case.

In addition, commander Mola despises the Diaspora misfits, and those who are planning to run the Eritrean opposition through their two or three man delegations, from Europe and North America are the same. He might give them “mesenabecha wereqet.”  I am impressed by his mannerism which is still true to the original country boy character; he would love being in the field, pushing everybody up north.

The first governor of the Sana’a Forum was Hebur Gebrekhidan who was succeeded by General Mesfin Amare, the governor of the Ethiopian Forum—the two gentlemen served the Forum to the best of their abilities and everybody I know is so grateful for the services they rendered to the development of the Eritrean opposition to the extent I expect Ben will soon broadcast, “ye Telat serawit atteremamsew wede ertra agerachew temelesu.” And to bid farewell to the sitting governor of the Ethiopian Forum, Eritreans in Addis should organize a farewell party as big as the one they organized for September 1—never mind some Diaspora arbegnotch gave them (and the EPRDF) a violation card for holding a werebela party in Addis Ababa. I believe by now the ticket is cancelled, or settled.

Unfortunately Eritrea wins over Ethiopia: Isaias beat Ethiopia in the organizing of opposition and logistic generosity department. That is because, in spite of the wrong perception, “Eritrea, a small country in Africa”, is wealthier (and more committed to the cause of its guests) than Ethiopia—my assumptions are based on statements by Commander Mola Asghedom. Imagine an Eritrean opposition copy of commander Mola Asghedom returned to the laps of Isaias, what would he say?

Some Ethiopians are always in a competitive spirit and they were annoyed because they wrongly considered the last edition of The Pencil as a comparison of the intelligence units of Eritrea and Ethiopia. However, I am determined not to let them win, enough winning with the light rail, toll roads, and factories—a selfish bunch! But since they think they have the right to win in any trivial competition that they imagine, here is what commander Molla Asghedom said about the matter when he came to my rescue:

“Eritrea doesn’t have [strength on] anything else but on security. It’s weak as we have seen and assessed, But [its] strength is just in security, soldiers, police, [and the like]. That is [where its] strength [is], nothing else.” Begin at the 12:33 mark end at 12: 44 mark

That “small country” survives on intelligence and security for breakfast, lunch, and dinner—and if you forget, a reporter who thinks he is giving a geography lesson will introduce to you Eritrea as “a small country in the Horn of Africa.” But size has nothing to do with that; sometimes it doesn’t matter at all. However, writers, particularly reporters, cannot avoid saying that. Then they spice it up with “Italian style art deco buildings, and sidewalk cafes, etc,”—good luck finding any context in the dull and boring reports. Never mind…

Since we are in a competitive spirit, facts indicate that out of 196 countries, Eritrea is the 99th biggest country in the world. Lucky for some countries, no one refers to Jordan as a small country in Asia, or small European country called Switzerland, or, Netherlands, or Belgium. Eritrea is bigger than these countries. Now is the time to state my own boring statement: Ethiopia is about ten times bigger and Sudan is about sixteen times bigger than Eritrea—big deal!

The following is a list of most of the countries that are smaller than Eritrea:

My dear Eritrean compatriots, don’t let the “Small Eritrea” remark annoy you, brush it off as ignorance. And once we get rid of Isaias and his deplorable regime, we can reclaim half the Red Sea and double the area of Eritrea–I am not sure what purpose that would serve, but we are in a competition!

The commander found his sanity when he decided to abandon Isaias and return to his country. Good for him because in Ethiopia dissidents can exist provided they stay clear of the anti-terrorism law that was copied from Dick Cheney’s diaries, or, was it Bush Junior? No difference. This should not be understood that the Ethiopian political system is comparable to that of the PFDJ by any stretch of imagination. Though it is not perfect, no rational person can argue it doesn’t provide maneuvering space for its citizens in all aspects of life. Now go ahead and compare it to Eritrea which is accommodating anti-Eritrean forces, but cannot accept caskets containing the cold remains of dead Eritreans.

The Ethiopian Diaspora groupies,  with their DC, London, Dubai, Asmara, connections should learn from Mola Asghedom and go back home, or forget it all and let Ethiopians live in peace.