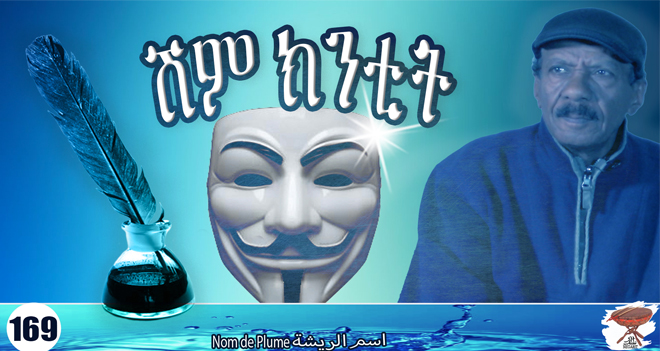 Before pencils, fountain pens and dry pens were invented, writers used feathers that they dipped in a container of ink to write. Somehow ‘plume’, a French word became so popular that it is used to mean the feather in many languages. And if you are thinking that pseudonyms are a new phenomenon, it is not. It’s as old as writing with a feather, and therefore it’s called Nom de plume, pen-name, a pseudonym. But why do people use pseudonyms, Nom de plumes?

There are two main reasons for that: 1) mainly, to protect their reputation and feel safe, or, 2) to have the freedom to display their vulgarity, indecencies, racism, bigotry, to insult and to defame others, for which they do not have the courage, or it’s so shameful to display publicly under their trues identities.
Ironically, many people who go by pseudonyms laughably they are among the most vocal in demanding freedom of expression and transparency!

Brief background to the use pseudonyms

In the center of almost everything lies the oppression of women who, throughout history, were treated unfairly. In the past, writing articles or books, only men could get away with writing bold stories. However, women had to protect their reputation for fear of reappraisal from societies that had so many taboo subjects; they hardly tolerated that coming from men, let alone women. And it became common for women to use male pseudonyms, at least they would be taken seriously and avoid the wrath of traditional societies. One such example is the writer Mary Ann Evans who chose to use a male pseudonym, George Elliot. But there were also men who used pseudonyms to protect their private life and avoid attacks from their rivals and enemies alike. Here is an example of a male author: Eric Arthur Blair. There are household names, like George Orwell of the Animal Farm, and 1984 fame, Eric Arthur Blair is his real name.

Stephen King is also one of the most famous living author who authored so many books and wrote scripts for numerous successful movies. He is also known by his pseudonym; his real name is Richard Bachman. Even Benjamin Franklin, one of the most known of the American founding fathers and authors of the Declaration of Independence, he authors several works under a pseudonym. Also, companies and corporations use “Fictitious Business Names”, a sort of a pseudonym.

Many though that using pseudonyms will cease to  be popular when civil liberty laws were enshrined in the constitutions of many democratic countries– laws that protect freedom of expression and other rights. However, there remained many repressive regimes that didn’t respect any of that. Worse, social media enabled many to hide their identities and avoid accountability or legal apprehension. Over the last decade, the phenomena have equipped unruly, undisciplined entities lethal tools to wreak havoc around the world. It has become a dangerous tool in the hands of extremists, chauvinist, bigots, sexists, and racists.

Unfortunately, such confusion doesn’t clash with the interest of social media businesses. Less than a serious law to regulate the one-sided freedom, the advantage that social media gives to aggressors, it’s unlikely the social media platforms will do something about it—it oils their advertisement revenues churning machines.

Understandably, Nom de Plumes provides a tool to cure one’s envy, jealousy, and hate against others. People low self-esteemed resort to pseudonyms to satiate their feelings of misery. people. However, there is a human reason for that: general anger, fear, insecurity. That makes people combative, overly defensive and tend to lazily classify people into friends and enemies, forgetting the shades of relations between the two. Therefore, if they act aggressively against a person they perceive as an enemy, they dump their anger and disappointments on them. And there is no better platform than social media to do that. And as extra benefit, a pseudonym makes them feel superior and invincible. It helps them live in an illusion and think they own the qualities of the fictitious character they create. Just imagine an actor who plays the role of Hercules beginning to think he is really Hercules.

Why is our problem with pseudonyms, Shm Kntit?

People can use any pseudonyms as long they do not transgress on others or consider their fake names as a license for negativity and to spread hate and lies. That is called gossip whisper. It’s wrong and worse, it becomes a habit.

There is an Eritrean wedding song; it’s sang when the bride and groom arrive at the celebration venues: “here come the lion, who just emerged from the forest.” AS usual, it is for then groom, the bride gets less that. Some pseudonym users act as if they are lions who just emerged from the forest, and everyone should take notice! I wish the song will be tweaked like the following, “here comes the mouse that grew up in a hole.” Believe me it rhymes in Tigrinya.

People inflicted with the malady of attacking and defaming others should recognize it’s a sickness and they must seek psychological and medical attention.

Pen-names or pseudonyms are not strictly bad or wrong, it depends on how they are used. I used one for many years, a pseudo-passport! Some people still know me as Gadi, a well-known respected family from Zula, Eritrea. I thank the late Yassin Aqedda who provided me the passport albeit with a different name. So, I recognize some are forced to change their identity. But I also know that many do it to avoid accountability, a cowardly act.

Now, let me ask you: why do you think I respond to them in my episodes? And why should I ignore the decent people who use pseudonyms and ask me important questions?

Comments and feedback are vital raw materials for speakers and writers. They are suggestions and inspiration for a topic to talk about. And since it’s coming from my readers, I can’t find better comments that whet my appetite to talk. If I don’t mention it is a response to someone, but I just addressed the issues, you wouldn’t discount it because if comes from a pseudonym. However, I understand the decent do not like bickering and the responses remind them of the harassment and abuse that they see committed on many people. They do not like it. However, I think the public likes it regardless of whether it’s a reply or just a normal speech; they easily relate to it. Also, it’s like my habit of using anecdotes, jokes, and stories to deliver my messages, spoken, and written. So, I hope you agree I must balance the delivery of my topics—to satisfy those who like and dislike comments to be discussed. And that’s why I will have a separate section under the Brand of “Jebena” to address comments. I hope you will enjoy it like you did the last special episode dedicated to replying to my audience.