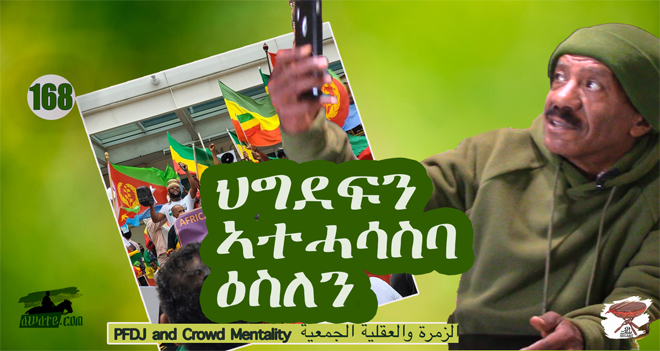 The following is inspired by Gustav Le Bon’s book, The Crowd—the study of the popular mind.

If you are walking on a street and dog bites you badly, do you sue the dog or the owner? That is how I see the vulgarity and abuse that Eritreans are facing. The PFDJ cannot claim innocence, I wish they would put a leash on their vagabonds.

All the above are examples of how the Popular Mind thinks and I will analyze them using Gustav Le Bon’s book, The Crowd, as a guide. In 1841, Gustav Le Bon wrote an authoritative book which still is one the best on the psychology of a crowd.

Individuals think relatively clearer on their own, but once they join a crowd, their views are mixed with the crowd, and they adopt a single common view. If they differ, they will be disowned by the crowd. And since most people get comfort in belonging to large crowds, they surrender their individuality which is diluted inside the crowd. That is Groupthink, a term coined by Irving Janis, a social psychologist, in 1972.

There is another illustration: an Eritrean elder was shocked when he saw a relative of his wife in tattered jeans. In a phone call, he told his wife her relative was living a miserable life with a stingy husband who couldn’t buy her decent new pair of jeans.

Why do people wear tattered pants?

Why do buy new gadgets when what they have could do?

Why do people make clowns of themselves like the man who counted money for a picture to prove to his folks he is doing well?

Why do people follow fads, fashions religiously, spend so much to stay trendy, shopping for gadgets, buying clothes they don’t need, and racing to buy new model cars when they already have cars they didn’t pay off?

The culprit is crowd influence though we think we decide freely. We don’t. Corporation decide on our behalf, “influencers”; marketing and PR professionals intoxicate us on behalf of corporation that produce consumer goods like the fashion industry; They relentlessly assault consumers and pressure them using sophisticated emotional manipulations. Why are cars advertised by carefully chosen women showing much flesh and make suggestive gestures? They have all studied the psychology of crowds.

That is how they prepare the playing field, “The Crowd” who unconsciously abandon their freedom and become pawns. But the worst is when politicians tickle our emotions and raw nerves to achieve a certain goal, mostly to serve their narrow self-interest. And they simple messages that appeal to the common fearful, numbed person.

Gustav Le Bon’s the Study shades light of many aspects of human nature and it encourages the curious to dig for more, to be inquisitive about the nature of crowds. It’s exhibited daily in places that suffer bad governance and civil strife. If a common person is told to beat up another person who is helplessly tied up and laying on the ground, most probably he would hesitate, it is also likely he would refuse to do so. But if he is in a crowd and everyone is beating the victim, his natural animal instincts would come to the fore and he would beat the victim mercilessly. Alone, individuals lack the courage to be so cruel, but they easily acquire the cruel nature of the crowd. Even if armed, people will think twice before committing a crime; in a crowd they acquire the cruelty of the crowd. Then they shoot and main human beings and destroy properties–a crowd has a dynamic of its own, unlike that of an individual.

Here is another example how belonging to crowd changes a person:

Years ago, I knew a nice woman who lived in Oakland. She was an avid PFDJ member. In 2003 the Eritrean opposition held a demonstration in San Francisco, the highest ever number showed up. The numbers didn’t only surprise the PFDJ who had assembled for a counter demonstration, it also surprised the opposition members. Sentiments run high and shouting at each other took the best of the people who otherwise were normal acquaintances. Towards the end, as I and my colleagues were leaving, I met the woman with her friends on a street corner. She angrily approached me waving her flag. She angrily berated me for demonstrating against the government she supports and pushed the flag towards me: kiss it, it belongs to your masters. I thought, if kissing the flag will satisfy her, why not! I held the flag to kiss it for her—in surprise, she pulled the flag away from my hands and screamed, “you are not worthy of killing our flag”. She couldn’t decide whether to let me kiss the flag or not—it’s groupthink. Apparently, she was not sure how her colleagues would react for allowing me to kiss the flag. She walked away in anger, badmouthing us until all the way until she got further from us.

The PFDJ abuses others because its members think they have more rights than the rest who are considered outcasts. They boast of their power, they own the army and the security force and their opponents have none. They are oblivious to the fact that national resources, its pride, good and bad belongs to the whole nation. However, since the crowd thinks it has a monopoly over everything, they think others do not have ownership of anything.

Crowd mentality is not always bad; any change requires mobilizations. And all social changes, starting from the French Revolution to the Eritrean armed struggle, had its energy in crowds and its psychology. With a clear goal, a crowd can achieve marvels. But before joining any crowd, people should be aware of the goals of a crowd. Most of the time, the selfish and the opportunist manipulate the crowd and use it for their own narrow interest. But still, there are many who led crowds towards achieving lofty goals, like freeing an oppressed nation, or for something that improves the life of humanity. Most benevolent dictators have done that with astounding successes for the benefits their citizens and neighbors. But when a crowd acts like a mob, it doesn’t result in a favorable and fair situation; a tyrant or a clique lurking on the side could hijack the achievements of the toil of a crowd. Rarely, enlightened people lead the crowd (provided the crowd is composed of reasonable elements) and ameliorate a possibly catastrophic result. Otherwise, it is disaster as in the Eritrean case.

I urge you to look for the book (The Crowd, or presentations of it) in videos and articles. Better yet, find it in a library, or buy it (it’s not expensive) and read it attentively and critically. Don’t forget to mark and highlight important ideas then compare them to the Eritrean reality. You will be surprised how the knowledge will open your eyes to many aspects of the problems that frustrate and annoy Eritreans. It would certainly expose you to new perspectives.

And now, whatever Eritreans do, they must lay the basis for any mobilization very carefully. It shouldn’t be done in a haphazard or emotional way. Pursue awareness and political maturity, encourage others to dig deep within themselves to be a fair, peaceful (yet resolute and prideful) citizens. Encourage free thinking and shun groupthink and crowd mentality. That is the path to towards enlightenment and the journey is long. Yet, good manners and prideful struggle would certainly usher a less chaotic, less abusive, and less painful future for Eritrea. And doubt, the goals are within reach. Never doubt it.