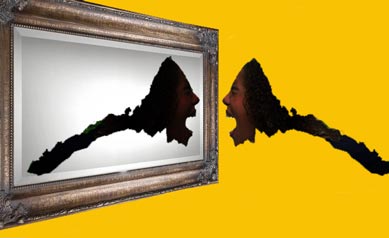 If there is one fallacy that both PFDJ* and anti-PFDJ Eritreans have in common is their belief that there is one Eritrea. But there are two Eritreas.

There is the Eritrea that started out to outlaw the outlaws and to supplant it with laws, but instead it has become an outlaw of the first rate in the process.

There is the Eritrea that victimizes its best and brightest and replaces them by the importing the least bright and mediocre teachers, who are in it for the money and not to advance the welfare of the society.

That is PFDJ’s Eritrea. Its history starts in 1970.

There is the other Eritrea, with physical demarcation, that shares only a name with PFDJ’s Eritrea, an Eritrea that agonizes, weeps and dreams. Eritrea that was formed before the armed struggle was waged, Eritrea that shunned accolades and puffery and cutting corners. Eritrea that was burned to ashes but that did not perish, because it was an idea, a vision and not a mere geographical entity because visions and ideas do not die, they just get postponed.

The two Eritrea are in constant turmoil as they face off to claim the name. And if these Eritreas were businesses domiciling somewhere in the USA or Canada, they will sue each other and the court would have decided, in a final and binding manner, awarding the name to its rightful owner. The victor would have boosted the bonus of its CEO and the looser would have fired its CEO. But the court system that will arbitrate between both Eritreas is the continuous struggle for justice occasionally sprinkled with some blood and carnage, there is just no way around it. PFDJ’s Eritrea knows it, but the real Eritrea is in denial of the blood and carnage part that PFDJ’s Eritrea will trigger.

But where does the Eritrea that is in direct contrast to PFDJ’s Eritrea exist beyond the physical entity that both vie for? To answer that question, you have to turn to its founding. Like most of African nations Eritrea’s birth was violent. That birth did not only create the geography we identify today as Eritrea that is dotted with arid and green land, with plains, valleys and hills that PFDJ’s Eritrea is so captivated with. But it is also tapestried with identity, legacy of bravery, betrayals, tenacity, and people with diverse backgrounds and one citizenship that was carved on its abundant rocks, rocks that symbolize the people’s profound endurance, a vision that weaves all these themes intricately beyond a mere real-estate that PFDJ’s Eritrea labors to reduce it to. There is no doubt about it, PFDJ’s Eritrea has defeated the real Eritrea, but it did not kill it, although Eritrea is not eternal, it is immortal as far as the eye can see and its longevity is baked in its sacrifices, the long walk to September 1961, the thirty year grueling run—two milestones that did not divorce its geography from citizenship and did not dice and slice it. What will endanger that immortality is the quarter a century of divorce of its land from its citizenship and the denial of its inborn diversity and the deliberate tinkering with its nature, the short-sighted and self-serving approaches of designing homogenous nation that is easy to control and manipulate.

The other danger to the Eritrea that is under constant assault from PFDJ is neither neighboring Ethiopia, nor the far-flung Langley, but the temptation to get domesticated by PFDJ’s Eritrea. The real Eritrea is a stubborn embryo that has so far refused to be aborted by PFDJ, which in vitro fertilized a hybrid embryo from surrogate mother to replace it. There are visible signs and symptoms that hint to the domestication by PFDJ’s Eritrea: sizable of intellectuals, spiritual leaders from both major religions and many oppositions groups either dither and equivocate about their commitment to the essence of the real Eritrea or are torn between embracing its diversity and PFDJ’s grand-narrative of molding the nation before its ultimate birthing from that surrogate mother.

Unlike pregnancy, a nation’s embryo does not have limited time span, so, when finally the midwives deliver the real Eritrea from its lengthy pregnancy, it has to be devoid of any of the crucial strains of PFDJ’s Eritrea as this is the anti-theses of the real Eritrea and that cannot happen unless we write real Eritrea’s future history, now and in the process authenticating that that embryo is not contaminated. This has nothing to do with weeding out or dismantling, it is a separate issue of protecting that sanctity of that embryo, but that embryo ought to be compassionate, forgiving and desperately reconciliatory in all of its phases: in its infancy, in its childhood, in its adolescence and adulthood. Lacking any of those traits in any of its phases will make it an incarnate of PFDJ’ Eritrea.

Gleaning from the debates that go on Awate forum, the teashops and other Eritrean gatherings, the scrimmage between the two Eritreans will be long and treacherous to both as both cannot co-exist; PFDJ’s Eritrea must perish, its rubble cleared and the other Eritrea erected in its place, not for glamor but for redemption, not for the sake of debilitating revenge but for gratifying triumph.

* PFDJ: People’s Front for Democracy and Justice, the sole ruling party of Eritrea