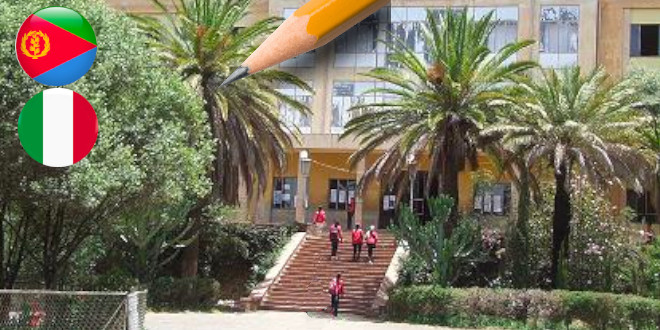 After months old wrangling with the school administration, the Eritrean government finally closed the Italian schools in Eritrea. The school bell, “Sadly remains silent for the first time in 103 years in the Italian school of Asmara” as an Italian writer put it. But the fate of the Italian school was sealed once the authorities revoked its license.

However, the repercussions of the decisions will be reverberating in diplomatic and social circles, because “it’s obviously one of a series of premeditated actions.”

It recent cycle started last June when the Italian headmaster took a unilateral decision to close the school following the worldwide scare caused by the Covid-19 pandemic, but he “failed to inform the Eritrean authorities before he did so” according to a parent in Asmara,  “it seems the government was waiting for any reason to justify the closure of the school.”

The Eritrean government hasn’t given a reason for revoking the license of the Italian school, “one of the largest Italian schools abroad is closed.”

Under the Italian colonization (1984-1941), Eritreans could only get four years of elementary education, grade 1 to 4. However, many of the famous Eritrean and Ethiopian intellectual of the time are a product of the Italian schools. But after the defeat of the Fascists in 1941, the Italian school system made an immense contribution on the education of Eritreans. Even the only institution of higher education, the University of Asmara, is now almost dead. In 1958 Catholic nuns known as Comboni Sisters founded the University of Asmara; now the government runs it. However, since it stopped enrolling students in 2003, the university  has become a hazy shadow of its glorious past.

The Italian school system ran several elementary, secondary and technical schools in many parts of the country and continued educating Eritreans under British Administration (1941-1952), the Federal Era (1952-1962, the Haile Selassie Era (1963-1974), and the Derg Military Era (1974-1991). Throughout the modern times, the world-renowned Catholic school system helped Eritreans, but the current government of Eritrea is determined to extinguish the torch of education that the catholic mission raised for many years.

Since 2001, several senior Italian officials visited Eritrea to mend the relations with Eritrea, but the attempts didn’t bear fruit. In 2014, Lapo Pistelli, the Italian deputy foreign minister made a much-advertised visit to Eritrea before continuing to other country. Lapo Pistelli said the purpose of his visit to Asmara was to inform “President Isaias personally … that Italy is ready to show a new willingness that will certainly enable the mutual trust that has been lacking among us for many, many decades.” But that visit came after October 3, 2013, when “over 350 Eritrean would-be asylum seekers perished a few miles off the coast of the island of Lampedusa, Italy.”  Lapo Pistelli’s visit was just one more attempt by Italy to appease the Eritrean  government; Italy was “still serenading the Eritrean Dictator.”

After intermittently issuing a series of calls,  in 2014, Eritrean catholic priests authored a critical message entitled, “Where Is Your Brother?” And since then, the catholic church has been going through difficult times. In 2019, the government closed many catholic church-run clinics and confiscated others in Eritrea; the step triggered an angry reaction from Eritreans all over the world. The organization of Eritrean Women condemned the seizure of Catholic Church Clinics.

Finally, the Eritrean government has taken one more drastic action by closing the Italian schools which began working in the country starting from the first decade of the 20th century.

While the diplomatic tug of war with Italy was going on, the Eritrean government was involved in a campaign to vilify the people it arrested. They included the journalists of the nascent free press that it closed. It was also vilifying the G15, senior government officials who included ministers and military commanders. It took the drastic measures while the world had its attention diverted to the 911 attack on the USA. But its main target was Ambassador Bandini whom it accused of instigating the dissent of those it arrested.

But many Eritreans didn’t think the diplomatic row could lead to the closure of clinics followed by schools. Importantly, a government should not close functioning clinics and schools if it has no alternative. So far, the clinics are replaced by pharmacies with empty shelves, and the alternative to a civil school is a boot camp called Sawa,