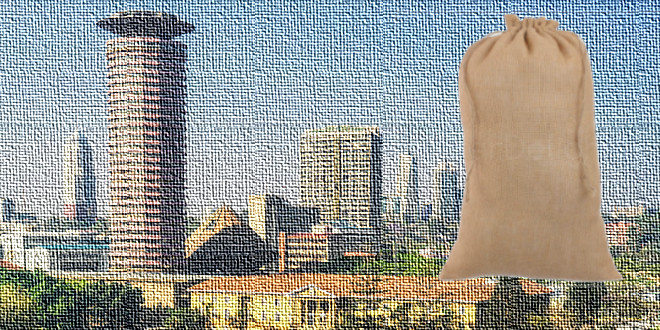 How many Jute plants does it take to make US$3.4 million worth Jute bags? The Kenyan Fraudsters didn’t have to worry about that; they just swindled the amount by pulling jute fibers over the eyes of some Eritrean victims.

Eritreans are not new to Kenya; a few call the country home since a long time. But over the last twenty years their numbers multiplied. Some settled there while others used the country as a steppingstone and ventured further to other countries. A few have become successful businessmen in countries extending from South Sudan to South Africa. Abeba Weldemichael and Hussein Osman, veterans of the Eritrean struggle, stayed in Kenya.

Recently the Kenyan press reported a story of a team of businessmen who allegedly swindled some Eritreans of their own money, and funds provided by financiers in a deal they believed “was a golden business opportunity.” The dream of profits turned into nightmares.

In 2015, a Mr. Mwaura told Abeba he has secured a tender for the supply of millions of jute bags to the Ministry of Defense and needed financiers.

Abebe Weldemichael reached out to her struggle era colleague Ambassador Haile Menkerios and told him she knew a connected “Kenyan businessman with contracts to supply jute bags to the military but needed financiers.”She was sure he wouldn’t turn them down.

Menkerios was Eritrea’s ambassador to Ethiopia and later to the UN before he broke with the Eritrean government in 2000.

Abeba Weldemichael and Hussein Osman together with the Kenyan Mr. Mwaura are directors of Winta Trading Company Ltd. Menkerios met Mwaura and as agreed on the deal.

Menkerios says, “I did my best to help Abeba and Hussein raise the investment needed for the business opportunity,” supposedly funding a contract of tender floated by the Kenya Ministry of Defense for the supply of jute bags.

Ambassador Menkerios then reached out to some friends in the USA and convinced them to help finance the deal. They agreed to invest provided he represents their interest in the deal. Menkerios transferred the first small investment he collected from Eritreans and international investors to the account of Winta Trading Company Ltd.

Gradually, the deal that started with a modest amount reached a total investment of USA$3.4 million. Worse, “receiving the returns on the investment became cumbersome and the excuses for that were awkward.”  Repeatedly they told Mr. Menkerios “the payments have been delayed by the government.” But as time went by, the investors pressured Menkerios to get their money, “they were in this deal because they trusted me” Menkerios said. That is when he said he decided to ask, “for the case to be investigated.”

Kenyan authorities have confirmed that the documents presented by the Kenyan businessmen about the alleged contracts are not authentic. And the Mumias sugar company that supposedly signed a contract for the supply of jute bags denied there was a contract with the Doc Find company, another cubicle in the labyrinth.

So far, the investigation to find the 300 million Kenyan shilling has reached nowhere and four Kenyans including  Mr. Francis Mureithi, are under investigation in relation to the fraud in the alleged Ministry of Defense tender.

Asked if he was under investigated, Menkerios said, “I am part of those requesting an investigation, not being investigated as some misinformed or with ill political intention- have chosen to allege.” He added, “I asked the Kenyan ministry of defense who said they don’t owe anything and that the case should be investigated for fraud and I joined the call for an investigation.”

Mr. Menkerios has a formidable enemy in the Eritrean government whose embassy in Nairobi is exploiting the case to besmirch his name. So far, the case has been circulating in Eritrean circles alleging “Haile Menkerios is being investigated in a fraud case in Kenya.” However, the Kenyan press has reported he is among those who demanded an investigation on the case.

Mr. Menkerios was the Special Representative of the Secretary General and Head of UN office of the African Union in Addis Ababa, before he retired.

He was also a member of the G-15, a group of fifteen senior Eritrean government officials who openly criticized the Eritreans president Isaias Afwerki and his government for maladministration and for refusing to hold elections. The president responded by arresting all the signatories; only those who were abroad, including Menkerios, escaped arrest. To date, no one knows the whereabouts of his colleagues who were arrested two decades ago, including Petros Solomon and Mahmoud Sheriffo who are jailed together with their wives—they were not able to see any of their children or family members since their arrest two decades ago.