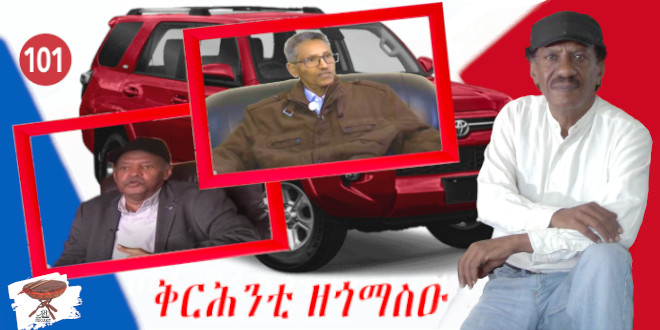 A few days ago, I watched a documentary type of video where Alamin Mohammed Saeed and General Abraha Kassa were host commentators. I picked three points from the video: one positive, one negative, and a third annoying. 1) I was glad to hear they talked about the fascist Agazian groupies, the first time PFDJ officials publicly commented on the issue, 2) the negative point is their unnecessary dwelling in the seventies and using language of that era 50 years later—I don’t have to agree or disagree with them here but if you argue alone, you certainly win. What you whined about is not history, it’s partisan politics from the 1970s. Enough of that already! And the annoying part is the oversized jacket of Abraha Kassa. I will come to that later.

It’s amazing how the chief of the Eritrean intelligence apparatus General Abraha Kassa and his deputy Simon Gebredingel are rarely  mentioned unlike the rest of the PFDJ senior officers, at whom Eritrean resistance forces lash continuously. The two are on top of the security apparatus that overlooks the imprisoning and jailing of Eritreans, but their names are hardly mentioned, why is that? I am looking for an answer.

Alamin Mohammed Saeed has been left alone since he was seriously ill for many years. Also, few know his current title—I think he was the secretary of the PFDJ, but I doubt if that is the case now! The good thing is he didn’t appear in a jacket twice his size.

But what is wrong with the generals? Why can’t they take care of their appearance—aren’t soldiers (generals at that) supposed to be Sharpe, well dressed? Don’t they parade soldiers and critique the way they dress… throughout the history of military culture? I think the jacket Abraha Kassa had on belonged to Andre the giant, the ramose French wrestler.

Abraha Kassa outdid Filipos in wearing an oversized jacket–last time I criticized General Filipos’ oversized jacket and a few people were mad. They said, ‘they are strugglers, they care less about dressing up, they are humble people. Is that true? Are they humble? Okay. Let’s see

How Frugal and selfless are the PFDJ leaders?

First, they are no more tegadelti (combatants of the struggle era), they are soldiers. Eritreans finished the conventional tegadelti era in 1991, including the generals. And if they die, they die, they pass away, like everybody else. Describe it in any way you want but they are not martyred. Soldiers are killed in action and Eritreans soldiers, like any other soldier in the world, get killed and die. True, Eritreans buried many martyrs though many others didn’t even get proper burial rites. Let’s end this sanctification of living people; we know where it has brought us.

For those who try hard to present the generals and other senior officers as divine beings, as if not interested in worldly things, cut that out. Are they not interested only in the way they dress up or on other things?

It’s common knowledge they like big shiny new cars, they like big villas, large furniture and large gadgets like television. They also like to send their children to the best schools; they slaughter animals regularly and feast on good food. And if they get sick, they travel abroad for medication—they are never in want of money. I think all of that is worldly greed and they are humans, not angels.

But now we need to sympathize with them: the Italian school, where they send their deqi Ayni maAar children to, is closed. Are they taking the school from the Italians and making it a special school for the elite of the regime and a few others? We will see. But don’t ever think they are commoners simply because they dress shabbily.

Let’s see Warren Buffet? The guy is so rich I doubt if he knows his net worth. It’s known his net worth is $82.3 billion dollars, the 7th richest man in the world. He lives in a house he bought in 1957 in Omaha, for $31,000. He dresses badly even compared against an elementary school teacher. But appearance doesn’t tell you if someone is rich or poor like in the case of Eritrean leaders.

Corruption in many faces

In the nineties I worked at a bank. One day the LC department head came to my office and curiously asked why Eritrea a free country deals in Ethiopian Birr and through an Ethiopian bank. I tried to explain but I don’t think he understood or believed me. However, I took the opportunity and asked him about the LC in question. It was a back to back LC and the beneficiary was a Kuwait company acting as a cover for an Eritrean who lived in Kuwait and was close to the Eritrean ruling party. I dug deeper and found out it smelled of corruption. The bank where I worked at didn’t accept back to back LCs.

A transaction between a Japanese buyer and Eritrea went through three middlemen in three different countries. Each kept a fraction of the original transaction amount.

For those who do not understand it, let me explain in a simple way:

Japan covered the first order of $20, which became $18 in the Netherlands, $15 in Kuwait and $12 in Dubai. Each of the collaborators in the three countries kept a part totaling $8 mil in custody for whoever was swindling in Eritrea. The PFDJ loads the $20 mill scrape metal to japan for $12 mil.

Such fraud has drastically changed since 911 when most banks adopted strict scrutiny procedures of transaction to prevent funds from reaching illegal and terrorist groups.

That’s why I laugh whenever I hear how frugal and honest the leaders are.

Why is our culture inactive when It comes to fighting for our rights? Why is it no one asks about the prisoners and no one tried to free or make enough noise to free them? We just cry at western capitals and we talk mostly to each other about our pain. We cry at each other’s shoulders. Why are many people who used to be so excited when they met Deroue Sheriff and others, and now they don’t even remember them, or worse, they say they deserve what they got. On the flip side, some of the prisoners are not even remembered because they were hated—they trampled over the dignity of many Eritreans and now many people do not have any respect or sympathy for them.

Some Eritreans produced a footage about a brave assassination operation they carried out against Eritrean government supporter in Addis Ababa. Apparently, the group is in Eritrea, probably in Asmara, right on the same streets with the PFDJ officials! Yet, they went to Addis Ababa to kill some collaborators and regime spies. I wish they save us more embarrassments: people do not whistle their way when driving to kill someone, they would be nervous. People who  want to record and document their operation do not use handheld phones to shoot a footage; they use fixed windshield camera grips—every car has one. And who died? It’s complicated and depends on who tells the story. I do not believe any of that.

But it got better—soon someone claimed the driver of Beyene Russom, the Eritreans ambassador to Kenya, was found dead in his car. A day later a copycat took news and spread it. However, in the process racing against time, he made a mistake: Beyene Russom became Semere Russom the ambassador in Ethiopia. But who cares, they are both ambassadors, and both have similar second names. As for the difference between Nairobi and Addis Ababa, both are capital cities of African countries

The Eritrean struggle doesn’t need lies, it has enough true oppression for justification. The suffering of Eritreans is enough, there is no need for propaganda. I wish individuals and small-time operators restrained themselves when they get the urge to act as intelligence officers, they suck at that. Have mercy.

NB: the above is a trsnscript of Negarit 101 on my YouTube channel