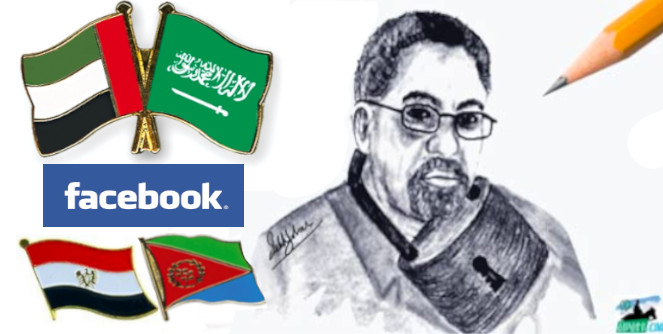 August 1, 2019, Facebook announced it was “Removing Coordinated Inauthentic Behavior in UAE, Egypt and Saudi Arabia” However, the news is no surprise to us since in March 27, 2018, Gedab, our news unit, has reported about the “Saudi, UAE, and Eritrean Internet Trolling Cooperation” with Eritrea. Gedab News was the first outlet to expose such cooperation.

It’s worth remembering that in the above mentioned Gedab News report, A Sudanese researcher stated that, the UAE was spreading its wings “beyond its size, and is ambitiously engaged in high stake games that will soon backfire.”

Not surprisingly, It did backfire, yesterday.

Yesterday, Facebook announced it has already removed hundreds of Facebook accounts, pages, groups, and events “for engaging in coordinated inauthentic behavior that originated in the UAE and Egypt and focused on a number of countries, primarily in the Middle East.”

In addition, Facebook stated it is “constantly working to detect and stop this type of activity because [it doesn’t] want [its] services to be used to manipulate people.”

Notably, the task force has been providing training and technical support to some countries that have joined the Saudi-UAE led alliance waging war in Yemen since 2015. One of the beneficiaries was the Eritrean ruling party (PFDJ) whose operatives received extensive training on the tactics of social media warfare. The main goal was to “provide training and facilities to the Eritrean ruling party to enhance its internet war against its opponents.”

Subsequently, the Eritrean government has established a task force under the leadership of Yemane Gebremeskel, the information minister, whose team includes several Eritreans residing in England, Sweden, the USA, and other parts of the world, including the Eritrean ambassador in Japan.

Moreover, the Eritrean trolls have been active in the Saudi-UAE campaign to encircle Qatar, and has been amplifying and translating tweets that originate from the UAE, Saudi Arabia, and Eritrea.

In implementing the misinformation onslaught, on Thursday, March 22, 2018, the Eritrean Ministry of Information issued a statement accusing Mohammed Jumma, an Eritrean exilee, now a citizen of the United Kingdom, of starting to “organize political and military activities as well as to train their members.”

Furthermore, the statement claimed that funding for the claimed activity was “provided by the Embassy of Qatar in Khartoum” While the “training and other logistical functions are managed by the Sudanese Security and Intelligence.”

Soon after the statement was published on the Eritrean government website, the topic was amplified on websites affiliated with the Eritrean regime, and on social media.

How are we affected?

For many years now, the existing outlets managed by exiled Eritreans have been engaged in an uneven media fight against a well funded Eritrean government owned misinformation machine. And it got worse after the Eritrean regime received considerable support from Saudi Arabia and the UAE.

Since 2000, just after the 911 incident in the USA, the Eritrean regime has closed the nascent free press, arrested its editors and reporters, and fully monopolized information in Eritrea. Almost two decades later, the whereabouts of the arrested journalists is unknown and they were never formally charged or sentenced.

Importantly, the troll activities affected awate.com since it was targeted by the PFDJ trolls who continually disrupt its discussions forum by amplifying misleading messages crafted by the troll task force in Eritrea, the UAE, and Saudi Arabia.

This is evident in the Awate Forum which has been running as a free discussion forum for almost 20 years, allowing anyone to participate as long as they adhere to the posting guidelines and debate with decency. However, the troll activities became so intense that many good and decent people have been intimidated and have limited their participation in the forum to avoid the abuse they receive from the trolls. But we will not allow that abuse to continue anymore.

Finally, we have decided to follow the Facebook decision and disable accounts that are disruptive and abusive. And it will not be haphazard—we have confirmed information that the primary target of the trolls is as follows:

We apologize to all the decent people who were abused and due to that, had to limit their participation. But we will no more tolerate anyone who violates the posting guidelines or abuses other participants. The Awate Team is determined to keep the discussion forum clean, inviting, and free of abusive trolls.