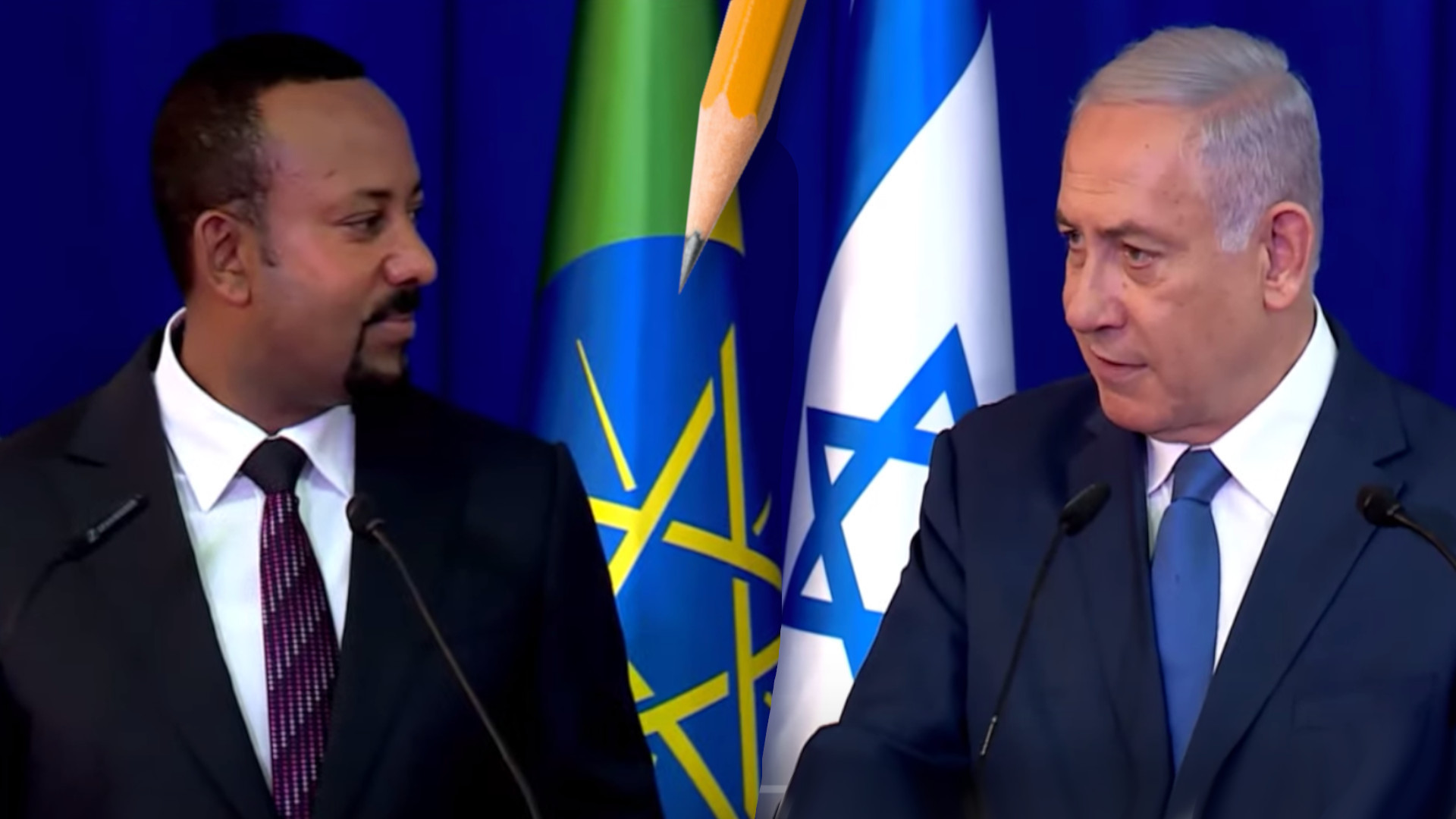 President Donald Trump could save millions of dollars by seeking advice from the Ethiopian prime minister Abiy Ahmed (who discovered an innovative way to deport migrants) instead of wasting money building a costly wall on the border with Mexico. Details are still scanty, but recently Abiy Ahmed suggested ways to help deport Eritrean asylum-seekers in Israel back to their country.  The proposal seems to have excited the Israeli prime minister Benjamin Netanyahu.

While visiting Israel in the beginning of September, Abiy Ahmed floated his “innovative projects” to help Israel get rid of the unwanted Eritrean asylum-seekers.

According to The Times, Netanyahu said, “he discussed deportation of Eritreans with Ethiopian PM”. It added, “Abiy Ahmed offered ‘innovative projects’ to bring Eritrean asylum seekers back ‘under wonderful conditions’… It was in a little-noticed election clip.”

Although it is not known what exactly could have inspired the novel discovery,  Abiy Ahmed’s gesture could have been motivated by many reasons:

Some Israeli observers believe Abiy’s move is an attempt to give Netanyahu’s reelection campaign an impetus that would enable him to  claim the victory, by cleaning Israel of the unwanted asylum-seekers–a great card that he would present to the Israeli anti-immigration activists.  But others believe Abyi’s motive is driven by his compassionate nature; he is just trying to alleviate the difficult situation of  the asylum-seekers who are living in a limbo. Still, other believe his motive is simply one item of the long list of deals that he is working on in tandem with Isaias Afwerki of Eritrea.

Of course there is a financial motive, specially since the EU, Saudi Arabia, and the UAE have promised to fund such projects. In short, Abiy Ahmed and Isaias Afwerki are eyeing the millions of dollars the deal could bring them.

Abiy’s political sales pitch is anchored on the “I made peace with Eritrea” claim that the uninformed could buy at the risk of  having a buyer’s remorse very soon. In reality, Abiy simply signed a secret agreement with Isaias, the dictator of Eritrea, alone. And it is the same Isaias who doesn’t even have a sham mandate by the people he has been abusing for three decades.

Since the independence of Eritrea in 1991, Isaias and his party have been ruling Eritrea with an iron fist arresting and disappearing Eritreans at whim, shutting the press and terrorizing Eritreans, and causing them to leave their country in their hundreds of thousands. Those who are still in Eritrea, do not even get running water, power, and do not enjoy basic human rights.

Maybe the Ethiopian prime minister could implement his innovative genius project to find a solution to the state of affairs in Eritrea where the dictator, whom he is bent on empowering, has established a reign of terror that has been raging for the last three decades. But unbeknownst  to many foreigners, the euphoria of the “peace with Eritrea” claim that Abiy is peddling has lasted only a few weeks, mainly on social media, and has already lost its zest. Nothing has changed for the suffering people, particularly those straddling the border areas between Eritrea and Ethiopia.

However, Netanyahu seemed mesmerized by Abiy’s idea though no project that forcefully returns people back to the country they left in search of freedom and basic rights, can be considered “wonderful”. The individuals in question left their country due to lack of justice, and escaping the never-ending life of slavery under the Eritrean regime. Worse, getting into Israel, braving the seas, the deserts, the imprisonment by extremist forces, rape, and risk of being victims of human organ traffickers, was not an easy ordeal. That is what Abiy Ahmed is conveniently forgetting.

Needless to say, the do-gooder Abiy could start by returning the hundreds of thousands of Eritrean refugees in his country,  back to their country though it’s not an appealing project. That’s because no country would fund a cross border deportation of refugee project from Tigray, in northern Ethiopia, to Eritrea. Maybe he could implement his innovative projects to return them home with no funding, just goodwill, gratis!

But maybe he is after another would-be well-earned title and position! Last year, Isaias Afwerki told him he can act as the president of Eritrea and assured him, “we will follow you”. He honored him with the title of “dictator of Eritrea” because that is the only title Isaias owns and can give. Now Abiy can comfortably add a new title to the titles he already has: “the Israeli Asylum-seekers’ Deporter General.”

Israel has about 24, 000 Eritreans, most of them in a limbo. Reports indicate that out of those who applied for asylum, only 13 were accepted while 5,500 were rejected. At the current rate, roughly 20 people are likely to be accepted in the next four years. The rest of them would probably become raw materials for Abiy’s innovative projects. Never mind the UN position that states “the majority of Eritreans in Israel cannot safely return to their country,” due to the ongoing human rights abuses in Eritrea.

Currently, thousands of Eritrean asylum seekers are living in a limbo in Israel because they can neither be deported by law, nor could their application be rejected (for diplomatic niceties). And they are not legally accepted either!

The precarious situation has forced a few Eritrean asylum-seekers in Israel to adopt an extremist and fanatical rhetoric. Some of them are already claiming they are Jews in order to gain the sympathy of Israelis. However, even many of the bonafide Ethiopian Jews, who migrated to Israel in the 1980s, are still suffering alienation and racism from those they call “ferenj Israelis”. And yet they have not fully assimilated. But the few among the asylum-seekers who have adopted the extremist positions are agitating for unrest among Eritreans, by spreading genocidal rhetoric, and contemplating violence to create a pure Tigrinya language based “Orit” nation, a  dream of uniting Eritrea with Tigray. Interestingly, that wild idea is being promoted, naively, by using  Israeli paraphernalia.