Why Eritreans Must Support Berhane Abrehe 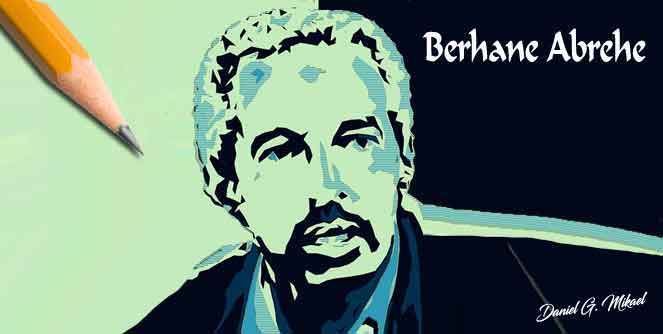 Recently we saw some books published, it’s a humble attempt to add to the efforts of reviving Eritrean literature, and uncovering history. That we consider a promising development.

A few weeks ago, Mr. Semere Beyene, the SBS journalist launched a book entitled “Hulfet”, then Mr. Hailesellassie Woldu launched his much-awaited book, the historical biography of Hamid Idris Awate—a book that was covered in one of awate.com’s columns. That was followed by news of the upcoming book authored by Mr. Berhane Abrehe, the former Eritrean minister of finance, who is the inspiration and topic for this editorial.

Berhane’s books are an exception because he addresses the prevailing Eritrean political quagmire and challenges dictator head on. He summarized the outline of his two books in an audio-visual recording that he issued, explaining the intention and motivation for writing the books, basically asking (and warning) the Eritrean dictator Isaias Afwerki to step down.

We strongly believe the step in itself is a bold, timely move. It’s also a risky undertaking. Eritreans have a recollection of what happened to those who in the past challenged Isaias Afwerki, the unelected man who has been ruling Eritrea alone, with an iron fist, for the last 27 years. Isaias’ reign of terror has almost emptied the country of its youth, it has destroyed the fabric of the Eritrean family unit, he re-engineered the society according to his whims with devastating consequences the effect of which has almost crippled the country. The social landmines he planted might explode anytime are buried all over the place. Some have already exploded, others on the verge of exploding, and still others are hidden and it’s anybody’s guess when they will explode. Those mines are very dangerous and could become a source of anxiety and frustration for a long time to come.

From his introductory speech, Berhane seems to be confident; no sane person takes such a bold step if not confident of a firm support behind him. However, because of the clandestine arrangements of such a support, if at all it exists, its nature is not known. In the past, many such initiatives ended disastrously, and their initiators were crushed brutally.

The fact that a book published in Eritrea becomes such a controversial issue is illustrative of the suffocating environment and how badly the intellectual capacity of Eritreans has been damaged. It shows that the concept of freedom of expression is non-existent. And that is one of the many problems that Eritreans wish to change.

Eritreans have been subjected to cruel treatment, humiliation, imprisonment, and exile as soon shortly after their country was supposedly liberated. Teachers who were snatched from Keren over two decades ago have disappeared. Many others were kidnapped from Sudan and have also disappeared. Scores were assassinated in the streets of Sudanese and Ethiopian cities. The entire society was disoriented, confused if that was anything close to the freedom for which they waged long years of bloody struggle. But the independence euphoria stood on the way and Isais consolidated his power and became the authoritarian ruler that he is today. But there existed some expression of resistance and opposition since the early days after independence.

Immediately after the referendum* in 1993, combatants went on strike demanding their rights to be respected. The strike was triggered as soon as Isaias announced that all combatants were expected to continue working with no pay for two more years. In an unprecedented move, the combatants “arrested Isaias” and took him to the Asmara stadium where he sweet-talked his way out to freedom. Soon after, many of the combatants who were suspected of instigating the strike were either arrested, or disappeared, or eliminated, or silently liquidated.

In 1993, handicapped veterans of the struggle-era were mowed down mercilessly; some were killed while sitting in their wheelchairs at Maihabar, a village where they lived. They made a mistake of demonstrating to bring to the attention of the public to their situation. They were appealing to the rulers to improve their miserable livening conditions and the pay attention to the inadequate support that was provided to them.

In 1998, the border war with Ethiopia was instigated and the bloodbath stopped in 2000 after tens of thousands of soldiers and civilians were killed or misplaced from both sides. Eritrea alone lost close to twenty thousand lives and over a hundred thousand people were misplaced. In the aftermath, a group of cabinet ministers, army commanders, and others challenged Isaias to change his governing style and to stop taking unilateral and destructive decision. He reacted by imprisoning the prominent leaders who came to be known as G15, some of whom were his colleagues for decades. Today, almost two decades later, their whereabouts still unknown.

At the same time, as the world was busy following the 911 incidents in the USA, Isaias shut down the budding free press arresting all journalists, editors, publishers, and reporters were arrested together with the G15. To this day no one knows their whereabouts and the only media outlets in the country–television, radio, and newspapers–are owned by the government and are engaged in partisan propaganda.

In what came to be known as Forto Operation, On January 21, 2013, Colonel Saeed Ali Hijay, a veteran of the armed struggle era, led a small contingent and occupied the ministry of information building to effect change—he was betrayed by some insiders and he was summarily executed with scores of his colleagues.

In 2017, Hajji Musa stirred the patriotism of many people when he defiantly rejected the government’s interference in the affairs of a private school whose board of directors he chaired. Hajji Musa was arrested causing wide demonstrations in Asmara–the first of its kind in the streets of the capital city since the workers and student strikes of the 1960s. In February 2018, Hajji Musa died in prison, his funeral was attended by thousands who were provoked at the burial grounds by security officers. That provocation led to the arrest of so many people, some of them underage children, old people, and women.

Now as Berhane comes with his firebrand announcement and a book, we question what his fate will be. Could taking a step against Berhane cause embarrassment for Isaias who is involved in a pseudo-peace agreement in the neighborhood, and has established good relations with the Ethiopian prime minister under the patronage of United Arab Emirates? Would he tolerate Berhane who is challenging him in streets of Eritrea that he had choked for 27 years? Or, would he resort to his natural manner and arrest Berhane? Would the arrest of Berhane, if it happens, be similar to the arrests of the past and be forgotten after a short time? Would it stir a reaction from patriots in the country, the army, and the conscripts?

Such questions cannot be answered conclusively, but the scenario can be deduced from the above outline. In the diaspora, however, the mood is one of jubilation, of determination, hope, and inspiration. While the international community is naively awaiting to see the impossible–Issias changing his spots and make peace with his people

We at awate.com support any step taken by any Eritrean in pursuit of freedom, justice, and rule of law. For that reason, we support and call on all Eritreans inside Eritrea and in the Diaspora to support Berhane in his pursuit of freedom and in his challenging Isaias Afwerki to step down. We fully support any step that leads to a transformational change in Eritrea. And since sooner or later we believe change will come to Eritrea, we wish that any group that effects change should be wise and just enough, magnanimous enough, and compassionate enough not to derail the goals of the Eritrean people for its narrow interests. At the same time, we appeal to Eritreans not to be obsessed with their secondary demands, grievances, bitterness, or rivalry. Nothing should stand in the way of change whose priority is unseating the dictator.

We appeal to the leaders of all Eritrean opposition parties and organizations, Eritrean intellectuals and professionals, Eritrean social segments, including women, students, and refugees, all religious leaders, Eritrean writers, and journalists, to rally in support of Mr. Berhane who is sticking his neck for the sake of change in Eritrea. Our collective support is vital because, without it, Isaias will have no qualms in squashing him like he did with previous Eritreans who attempted to effect change in the country. We should not allow the pattern of cruelty to continue. This is the time that all Eritreans must stand in unison—asking “where has he been all these years?” is counter-productive. Everyone has his own circumstances. Now is a time to rid our country of the nightmarish governance and end the cruelty that our people have been subjected to for too long.