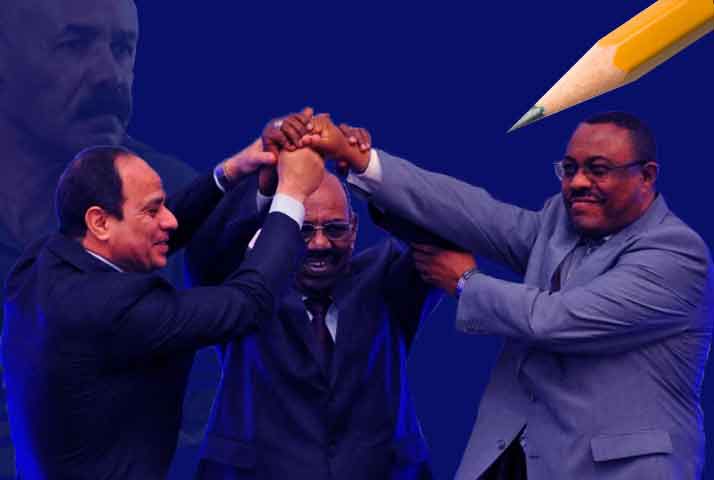 On  November 28, 2016, Eritrea’s Isaias Afwerki traveled to Egypt for a three-day visit and met Egypt’s president, Abdulfatah AlSisi. The official news outlets of the two countries didn’t disclose much about the visit except the usual boilerplate statement, ‘they held talks to boost bilateral relations and cooperation between the two countries.”

However, several Egyptian news outlets opined about the nature of the Ethiopian-Egyptian relations in connection with Isaias’ visit. For four years, Egyptian papers have been writing extensively about the Great Ethiopian Renaissance Dam (GERD) presenting it as a factor over which Egypt and Ethiopia might go to war. The newspapers also stated that Egypt was using Eritrea to pressures Ethiopia. There are also a few Egyptian politicians who believe the current consultations between Egypt and Eritrea cannot be seen in isolation from the tension between Cairo and Addis Ababa over GERD that, “Ethiopia insists on [completing] and Egypt opposes because it decreases its share of the Nile water in the coming years.”

In June 3, 2013, the deposed Egyptian president, Mohammed Mursi, convened a meeting with Egyptian dignitaries to discuss Ethiopia’s Renaissance Dam and what Egypt’s response should be. The meeting was televised live, but apparently, some of those attending the meeting did not appear to be aware of it. That is when a prominent politician stated:

“we do not want an embassy in Ethiopia, we need a task force in Ethiopia…political, intelligence, to deal in all aspects with the Ethiopian reality, we must have a role in it. …there must be an interference in national affairs… If we don’t achieve a result with change, we can with pressure…. the third team is military…”

There was even an explicit suggestion to use Eritrea, Djibouti, and the Oromos, to destabilize Ethiopia to hamper the construction of GERD.

A large section of the Egyptians, particularly the political elite, consider the Nile their God-given private river, like some Ethiopian political elite obsessed with the Eritrean shores. And if you add to that the mix of the adventurous regime in Eritrea, a minor problem can brew to a full-fledged confrontation. And some reckless Egyptian quarters would not mind using Eritrea as a pawn and agitate for a confrontation between Ethiopia and Eritrea citing the border war between the two countries.

Though sporadic skirmishes continue to this day, the war ended in 2000. Since then, Eritrea and Ethiopia continue to be in a no-war-no-peace situation, and some Egyptian politicians wish to reignite the war, even if what they foresee is a slim chance it would hinder the completion of GERD. If that doesn’t materialize, they seem to have an ambitious backup plan where the Egyptian air-force would destroy GERD, or Egypt could launch long-distance missiles to wreck the dam. That sounds far-fetched and they must know it. However, they know that such fantastic scenarios keep the public busy and advance their partisan aspiration, whether they support AlSisi or wish to depose him.

As reported in the media, Masoum Merzouq, a veteran Egyptian diplomat has warned against the careless use of the Eritrean pressure card to prevent damaging repercussions. That is because Ethiopia has already accused Egypt of sponsoring Ethiopian groups involved in the recent unrest that engulfed the country. The veteran diplomat also warned against “being carried away by naive diplomacy”.

Throughout the period of the recent unrest in Ethiopia, Egyptian news media covered the sensational Ethiopian unrest with great zeal, regularly hosting Ethiopian dissidents. Last October the Ethiopian government protested to the Egyptian Ambassador in Addis-Ababa, Abubaker Hefni, and then openly accused Egypt of fomenting the unrest in the country. The accusation created a diplomatic frenzy in Egypt, where the politicians moved to contain the situation that could have escalated and damaged the already delicate Ethio-Egyptian relations. A few days later, the Egyptian media received government signals to stop hosting Ethiopian opposition elements not to anger Ethiopia. Last March, Abdulfattah AlSisi had visited Ethiopia to sign an agreement together with Sudan’s Omar AlBashir, and Ethiopia’s Hailemariam Desalegn on issues concerning GERD.

Where does Eritrea fit?

Eritrea is considered a Nile riparian country though it contributes only around .01% of the water that flows to Egypt. And its interest and role in the hydro-politics of the region is insignificant or negligible; the Egyptian-Ethiopian wrangling over the Nile shouldn’t concern her much. But if Isaias is peddling his services, whatever they are, however insignificant, there is a chance there are some buyers.

In his recent visit to Egypt, Isaias was received at the airport in Cairo by the president of the council of ministers and by the minister of irrigation. The presence of the irrigation minister is significant since Egypt’s irrigation is synonymous to the Nile. If the visit was expected to be provocative, it achieved more than that. The fact that of all the ministers Egypt would send the irrigation minister to receive Isaias is possibly a calculated gesture given the current frustrated Egyptian agitation against the GERD. The visit must have appeared as a threat to Ethiopia even if it was not intended to be so.

That incident would implicate Eritrea as a suspect simply because the policy of Isaias Afwerki and his government has always been focused on finding a way to entangle Eritrea in conflicts that have no dividend for the Eritrean people.

For years, the Eritrean regime has been helplessly cajoling one side or the other to immerse itself in the Yemeni crisis. Finally, with a mediation by Sudan’s AlBashir, who plunged into the Yemeni fray earlier, Isaias attempted to be part of the Saudi led alliance in Yemen in a very humiliating manner and failed. Yet, he never gave up but continued to cajole the UAE at the expense of Qatar, his only loyal friend in the region.

In one of his visits to Qatar, Isaias Afwerki had openly complained to the Qataris that the rest of the Gulf States were punishing him for his close relations with Qatar, and that they should compensate him. Though the inter-Arab alliance itself is anything but stable and often may offer space for squeezing oneself in, Isaias doesn’t have the clout to make his role significant in such an alliance. His recent visit to Saudi Arabia–given his erratic diplomatic relations–seems to have helped him realize the league that he tried to join is beyond his stature, thus, he decided to pursue the role of a second fiddle to Egypt.

After the overthrow of Mursi, and the weakening of the Muslim Brotherhood, Egyptian diplomacy has made bold changes, making a drastic shift of directions in its regional and international policies. Abdulfattah AlSisi is cognizant of the cost of that shift and what it entails: Egypt risks losing billions of dollars in Saudi aid. But the Egyptian popular sentiment is centered around the Nile, around which the rallying cry of partisan politicians is entered. And though AlSisi handled the Nile case with Ethiopia more rationally, his opposition never stopped agitating the common Egyptian by using scare tactics stating that Ethiopian will decrease Egypt’s share of the Nile water, “which will make Egyptians go thirsty.”

Ethiopia seems to believe that Isaias found a diminutive role in the region’s hydro-politics, and he is poised to help Egypt in its emotional conflict with Ethiopia. However, neither advancing Egyptian greed nor cheering Ethiopian paranoia, serves Eritreans. That situation only helps Isaias Afwerki who lives in a self-created isolation which has damaged the reputation of the country. The Ethiopians are also not helping the situation by refusing to cease sovereign Eritrean territories either; knowingly or unknowingly, they are making the situation suitable for Isaias’ haphazard and confrontational politics. A master of the art of conflict peddling, Isaias must find his place either in the Egyptian-Ethiopian discord or in the Saudi led adventure in Yemen. And if that requires sacrificial lambs, he has at his disposal hundredth of thousands of conscripts whom he can call to arms in a short notice. He has done it before, plunging Eritrean forces in many adventurous battles, and he can do it for the umpteenth time.

Eritreans have grieved over their fate for too long. Their pristine country and energetic people could have attained so much in the last twenty-five years since they liberated their country with untold sacrifices. Isaias Afwerki has killed the Eritrean resourcefulness and entrepreneurship and is holding their dreams hostage. He has gambled too much with the people’s dedication and commitment to developing their country. He has caused their dream and aspiration for a prosperous and peaceful country to vanish. And now, he is focusing on massaging his ego and runs here and there to collect alms for his dirty roles. How does he not know that Eritreans, if not for his rule and his tyranny, would have achieved that long ago? However, a tyrant who doesn’t mind denying Eritrea the benefits that it could have reaped from its 600 miles long Red Sea shores, and after rendering Assab and Massawa that were poised to become bustling ports into ghost towns, in addition to causing the exile of hundreds of thousands of youth to the four-corners of the world, he still salivates to inflict more wounds on the Eritrean people.

The PENCIL is awate.com's editorial and it reflects the combined opinions of the Awate Team and not the individual opinion of team members.
@@awate2
Previous Recognizing Individuals: A Step Towards Transparency
Next Gejeret 1975: Life Under Mengistu’s Derg