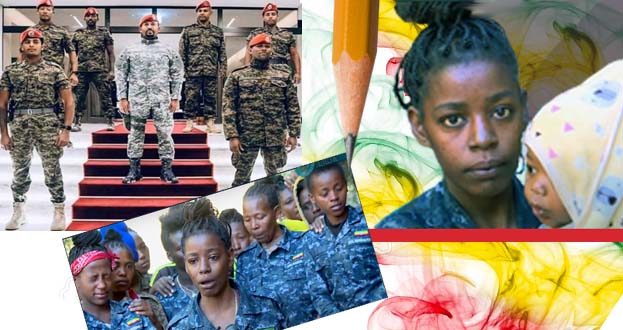 It’s safe to say Ethiopians love their country more than their people. In fact, the ever warring political and military elite do not seem to mind eradicating the people and destroying the country and as long they are assured of ruling the rubble that’s left behind. Eight-hundred years of governing patterns attest to that. The ruling elite is obsessed with power, only ruling power. Never mind citizens’ rights, economy, equality, and all other aspects of good governance if they do not serve the ruling class. And the right strategy to reach that goal is by displaying acute chauvinism, aggressive behavior, and multiplying enemies. Of course, all that needs spicing up with a generous dose of Arrogance.

It has been about six-weeks since Ethiopians launched yet another cycle of violence. As much as the official media wants to make the war look like a “law enforcing operation,” it has since turned out to be a repeat of the ancient ethnic wars that is fast transforming itself into a cross border war.

“Truth Is Lost in a Haystack”

It’s difficult to tell if the Tigray region is a mortal enemy’s territory or part of the Ethiopian national polity. It is also difficult to discern whether the federal government is responsible for the entire country or a foe of the regional government. The riddle needed to be discussed and we asked an Ethiopian scholar for an explanation. “Truth is lost in a haystack like a needle,” he said. But we suspect the Ethiopian army’s bayonets are not fitted with needles but with traditional knives. He couldn’t say if there was a chance the knives would be lost in the haystack.

The staggering number of news items coming out by Ethiopia are unbearable due to its unimaginable high frequency and because it’s stale copy and paste types. There is no sense of journalism save for a few reputed outlets. And the world thinks Ethiopia has a press law! It has, but the reporting sounds like a “Leqso bet” rumor mongering. Like mourning sessions where many people gather at the grieving people’s home and spend hours chit-chatting and gossiping. But that would have been benign if not for the official mouthpieces that habitually spreads sensational news only to retract them the next day. However, nowadays news travels at high-speed and it cannot be recalled. News is not like a stick you throw away and then instruct the dog to fetch it!

Last week the official, semi-official, and partisan news outlets announced the arrest of Dr. Debretsion, the forced-out governor of Tigray. But it was too late when they decided to recall it. Worse, it was too late for an Ethiopian from Sekota; he was killed by a stray bullet fired by the crowds celebrating the arrest. The bullets also started a fire on properties. We are not sure if there were other celebrations or victims because there were several claims of similar arrests. But who would challenge the media outfits when most of the Ethiopian press has become like little Pravdas, thanks to the invaluable lessons in a crush course that Abiy took in Asmara, Eritrea?

Three days ago, the Ethiopian News Agency published a heart wrenching video of child-soldiers who went through a traumatic situation in the war. For centuries, the region has produced enough such wars to drive the children into insanity let alone the adult population. And the entire Horn of Africa region prides itself in sacrificing innocent children in meaningless partisan and ethnic wars. Why was a camouflaged child carrying a baby sent to the battle front in the first place?

Well, the ruling elite considers the children old enough to be cannon fodder. It has always been that tradition and one must adhere to the culture religiously.

Four days ago, the DBL Group’s textile and garment factory in Mekelle closed shop after its premises escaped a bomb disaster. It’s the third manufacturing concern to suspend operation. Ethiopia confidently boasted about its double-digit growth for over two decades, and according to Reuters, “by 2017, it was the world’s fastest growing economy.” In 2018, Abiy took over the state power and announced his version of Gorbachev’s Glasnost which he branded Medemer (addition.) However, so far, the addition exercise has become subtraction.

Moreover, Ethiopia’s shortage of foreign currency means the country could face difficulty in servicing its debts or financing its imports. That is in addition to the disaster meted by the Covid19 pandemic, the locust invasion, and the ongoing war that has displaced tens of thousands of people and destroyed towns. Already, Ethiopia suffers from a type of unemployment that experts have not yet properly classified though bloodlust-unemployment could be a fitting name. The multi-faceted Ethiopian problem is a combination of illiteracy, booming population, and an economy always disrupted by wars in pursuit of hegemonic aspirations.

Ethiopian Airlines is the most successful, world class enterprise in Africa. It lays golden eggs. Lately it was plagued by ethnic profiling and the administration bluntly told its Tigrayan employees to stay home, a polite version of firing. That trend started with the firing of hundreds of Tigrayan soldiers form the Ethiopian peace-keeping forces working under the UN in Somalia where some soldiers refused to drop their arms and a soldier was killed in the standoff. Some private sector  corporations followed suit and it became an open season for profiling Tigrayans and firing them. In short, Ethiopia adopted the concept of furlough and changed it to rude-firing. Naturally, at first, only the targeted people will be affected but soon the confidence on the Ethiopian economy will start to face a piecemeal erosion.

When the ruling class is so detached from the people, the nation enters a long-lasting phase of despair and hardships… and statements by some officials exacerbate the situation.

A few days ago, answering a question about the Ethiopian refugees in Sudan, Radwan Hussein, the deputy foreign minister and head of the emergency task force said, ‘we are 110 million people, thirty or forty-thousand refugees are like one family,’ meaning he will not feel the loss. Insignificant. An official is not expected to belittle the plight of almost fifty-thousand displaced citizens. But that attitude is symptomatic of what ails Ethiopia: people are dispensable. If the plight of tens of  thousands of people is described with such simplicity, one can determine the going value of an individual’s life. One individual is not even equal to one family.

Meanwhile, many editors are running amok with news headlines agitating for a confrontation with Egypt, Sudan, UAE, Djibouti, South Sudan, Britain, USA, and every other country that can be goaded to a confrontation. The involvement of some countries is too obvious to deny but the provocation of others by the partisan media, which seems to be running the foreign affairs of the state, is irresponsible. However, Ethiopians and their government need to remember that every time they are hit by a catastrophe like famine, they must run to the big daddies of the western countries for help.

A government can have an opposite position to that of a donor state, but it must be thrifty in using rude and arrogant language in expressing its position. Besides, poking at Sudan and South Sudan is not a prudent diplomacy. So is the banning of local journalists unwilling to tow the government’s line. So is denying entry to foreign reporters and humanitarian agencies. It’s reckless, particularly when there are crime scenes like May Kadra. That town should have been cordoned off at once until impartial observers investigate the crime scene. Reporting on such crimes should not be left to partisan media and feuding parties. Sadly, that seems to be the case. It has been more than a month since the crime was committed, and it is anyone’s guess what evidence is left untouched or not tempered with.

Anecdotal evidence that confirms Eritrean army involvement are overwhelming. However, after six-weeks of warfare with no concrete evidence, makes the claim questionable or very shaky. Providing an evidence for the claim by the Government of Tigray shouldn’t be that difficult. In a time when cellphones are abundantly available, it is mind-boggling that no evidence was presented to support the claim. True, telecommunications are disrupted, there is no power supply and myriad of other excuses, however serious that might be. How can the TPLF with its formidable intelligence apparatus be so disabled to the extent that it cannot smuggle a single memory disk outside of Tigray? How difficult could it be for someone to carry a flush-drive from the hinterland, via Raya to Dessie, or via Humera to Gonder?

Debates over the presence of Eritrean forces in Tigray has divided Eritreans. On one side are those who categorically deny it, and on the other, those who seem dead sure that Eritreans are involved. Neither the two, nor the TPLF has provided evidence for their claim. So far, the horserace-like betting of the two Eritrean sides has not produced a winner, but the quintessential Eritrean horse is still running aimlessly.

The PENCIL is awate.com's editorial and it reflects the combined opinions of the Awate Team and not the individual opinion of team members.
@@awate2
Previous Eritrean Refugees: Fifty Years of Injustice
Next Gallantry at Halhal