Posted on December 7, 2016 by Tzigereda Haile in Articles 131 Comments 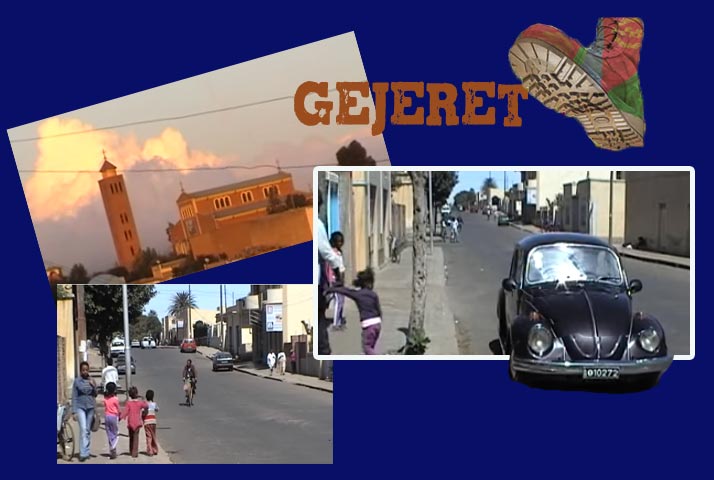 If you are from Gejeret, then you might remember where the residents of that neighborhood in Asmara found refuge in 1975. I was one of those who took refuge at San Francesco or Collegio La Salle, which was administered by the Kerenite Fratelli, Fr. Michael, Fr. Kahsay, Fratello Beyene, and Fr. Demsas. Later, I heard Fr. Beyene joined the struggle but I’ve no information if he made it to Independence Day. Also, rumor had it that afterwards, Fr. Misghina quit the La Salle seminary, got married and left for Sweden. And there is more of such news.

The year 1975 ushered a turbulent and terrible time for Asmara residents who hitherto escaped the ugliness of the raging terror that was being carried out by the Derg. Most people from Gejeret stayed at home during daytime, and when the sun was about to set, they moved to La Salle to spend the night. Usually in the late afternoon, most of the people packed necessary supplies, took along mattress and blankets, and bagged other items, and headed to La Salle to spend the night. After some time, that became the daily routine, people were convinced it was the only way to avoid falling victim and facing the unimaginable cruelty and looting in the hands of the Derg security forces, the Tor Serawti who became extremely active during the night.

Two places became safe havens for the residents of Gejeret: San Francesco and La Salle; they offered relative security and peace. Meanwhile, many residents trekked to the countryside around Asmara where they found refuge and the rural areas were crowded with relatives and refugees from the capital city. My family couldn’t follow the footsteps of the other people since our ancestral village was entirely burnt down and razed to the ground. The destroyed village became uninhabitable for its residents let alone refugees from Asmara.

Sometime later, for reasons I cannot exactly explain, all the people who took refuge at La Salle and San Francesco gradually stopped frequenting those place; they started to stay at home overnight. However, the risk that the Tor Serawit posed on their safety, was not over yet.  Maybe that could be due to accepting fate—z’metse ymtsa’e attitude. It could also be that somehow, we were aware of Abraham Afewerki’s song long before it was released:  “tsebaH ms Halefe Kullu”, meaning, “tomorrow, when everything is over”. We pretended to listen to the imaginary song because fate had to somehow be confronted and challenged.

As the situation deteriorated in Asmara, the schools were closed; a few classmates made it to Addis Ababa. Luckily, the Frattelli from Collegio La Salle not only hosted the people, but they also offered opportunities for those who could continue to pursue further education by providing schooling with a ‘modified curriculum’. That was a very creative and wise move which helped the children not only to have some positive distractions from what was happening during the terrifying times, but were able to normalize our daily life when everywhere else murder and mayhem was prevalent. The Fratelli and their institutions deserve so much credit for their kindness and for what they provided the people in their time of need, and for saving so many lives. Personally, I am indebted to them, and I can’t thank them enough for the great service they provided

During that time, Asmara rarely had lights at night and the people also preferred dim candle lights to avoid detection by the Afagn Guad, (the strangulation teams) of the Tor Serawit in the evenings—dark houses gave them the impression the homes were uninhabited. As soon as darkness sets in, residents were supposed to speak sotto-voce, and all talks were whispers. One learned how to sharpen their hearing faculties and could discern the sound of the cars that roamed the deserted streets from other sounds. Outside, the air was so silent; inside the houses, even footsteps were not supposed to make a noise. We had learned how to tip toe.

My mother was very careful; she would walk  to the kitchen quietly calculating the position of every step she took, until she made sure the danger was over. Usually she would peek through the crack in the door and check the streets for extra assurance of safety. It was then that she passed her verdict. She would order us to either relax after so many tense hours, or continue to be silent and freeze where we were, depending on what she detected through the crack in the door.

Our house was located on a high ground, and on the side was an empty and steep slope. That place became a convenient escape route for the Eritrean combatants, the fedayeen, who frequently sneaked into Asmara for military operations. Thus, every time we heard of a Fedayeen mission, or assumed that one was underway after hearing gunshots, we were obliged to exercise caution.  At night, the nearer the sound of gunshots, the more probable the terrorizing search squads, (fetash budn) would inevitably start to comb the neighborhood starting early morning, and carry out house to house searches.  It was during such alerting moments that my mother would rush to hide any item that was expected to cause trouble. Therefore, even the music cassettes of Tsehaitu BeraKi’s songs would be thrown in the gutters or discarded far away, and my mother, not understanding their value, would burn the pamphlets that were secretly distributed by the combatants and their collaborators in the city.

On the search mornings, people despised the loud knocks and the security forces who violently banged on the doors, all the time screaming, “kfetew“, open it! That terrorizing sound still rings in my ears and vividly resides in my memory to this day.

By the morning, if there was no shooting during the night, my mother would sneak a peek to check the streets. She would check to the left and to the right to ensure the streets are empty. Adey Mihret, a frequent churchgoer would be the first my mother sees on the street. She would be returning from church after praying for the safety of her children. She was a very courageous, decent, and patriotic mother. Understandably, her children (and later her grandchildren) joined the armed struggle–no exception, all of them. She was hailed by many as a symbol of the struggle and the pride of all women.

During the struggle era, the house of this indomitable mother had become an established base for the clandestine activities of the combatants; it was also where the radio communication apparatuses were stored. My mother would exchange greetings and niceties with her and ask “dehaido rekhibkn; dehai nai deqkhn?”, asking if she received any news from her children.

Sadly, the gentle and courageous Adey Mihret passed away before the independence of Eritrea, and one of her sons didn’t make it either. Her youngest son, an EPLF combatant, who suffered from and mourned his mother’s loss for a long time, is now in jail, is now in jail, detained without charges. The PFDJ government doesn’t offer any rights for prisoners and it doesn’t recognize the writ of habeas corpus.

My neighborhood is now somehow deserted, emptied of its inhabitants. My mother and Adey Mihret have passed away, their children are not there anymore. And now, the Afagn Guad is replaced by  the PFDJ’s dHnet. Both squads snuffed out our life and exposed us to an unnatural, abnormal fate, for years. Ironically, proud of what they have turned Eritrea into, they advertise their slogan: Come and see! Can I go to Eritrea and be able to see the jailed son of Adey Mihret, my neighbor, my idol of perseverance and the very symbol of the epic struggle of Eritrea?  Can I go and take a lawyer to defend his right to due legal process?

A while ago I asked a well-informed friend who lives in Eritrea why my neighbor was in jail.  He candidly replied: “ah.., kindey indiyu geyru kab z’esser…resiEnayo keman” (Oh… it has been a while since he was jailed, we even forgot about him).

I wonder: what would my mother and Adey Mihret say if they, somehow, once again returned and met one quite morning at our yard gate?

NB:
1. Adey Mihret is not the real name
2. Some Tigrinya expressions are used to reflect the cultural nuances