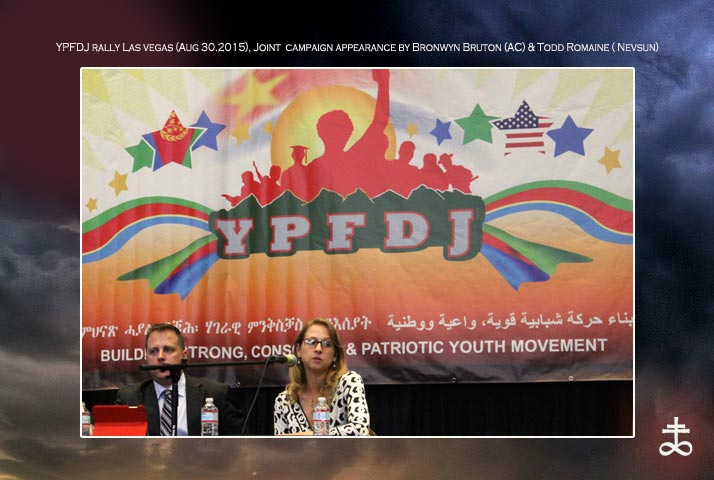 The Atlantic Council (AC), an American Think Tank, is hosting a seminar, aptly entitled, “Rethinking Eritrea.” There is no Eritrean in the list of panelists, unless Dan Connell, a longtime friend of Eritrea is considered one.

The meeting is scheduled for today, December 8, 2016, in Washington, DC, for the benefit of the deputy director at AC, Ms. Bronwyn Bruton, the author “of one of the publications being released.” It also seems to be a campaign by Nevsun to prevent the USA from sanctioning its operations, as called for in the September 2016 congressional sub-committee hearing.

Last October, Yemane Gebreab was scheduled to speak at an Atlantic Council event in Washington, DC, by invitation of Ms. Bruton, but the meeting was cancelled at the last minute because the US State Department, citing a White House executive order banning him from entering the US, stated that his visa to the US was to attend UN General Assembly meeting, not to visit Washington DC.

Clearly, Ms. Bruton has become a valuable asset for the Eritrean regime. It is equally clear how she instantly became a self-proclaimed expert on Eritrea after spending a few days there in the spring of 2015. She had returned from her excursion as an expert on Eritrean affairs to the extent that she earned a spot to testify at a congressional hearing, about Eritrea.

Why Ms. Bruton chose to turn into a hyper lobbyist for the Eritrean regime is not known in detail. However, she has been a reliable defender of the Eritrean regime’s strong relation with Nesvun, the Canadian mining company that has dug a huge pit in Bisha, Eritrea, and is extracting gold and copper.

Towards the end of 2014, the would-be Eritrean expert was busy shooting a considerable number of tweets against the TPLF, a member of the ruling coalition party of Ethiopia. TPLF is the archenemy of the PFDJ, the only legitimate party that rules Eritrea. An Eritreans insider said, “Ms. Bruton’s anti-TPLF Tweets caught the attention of the PFDJ, and earned her an invitation to visit Eritrea, and to interview Isaias Afwerki, never mind she is not a journalist by profession.”

When Ms. Bruton graced Eritrea with her presence, Nevsun Resources was in the middle of a campaign shoring support from the diplomats stationed in Asmara, and Ms. Bruton was introduced to the Nevsun campaigners by an American diplomat; she immediately jumped on to the Nevsun bandwagon. Lucky for her, another invitation by the PFDJ followed, and in 2015, “she had a sojourn of a few days in Eritrea.” Thus, an Eritrean expert was born, and Ms. Bruton began to build her “Eritrea Portfolio”, thanks to the PFDJ and Nevsun, she made it her career. Unfortunately, to this day, she never intentionally met an Eritrean opposition except when she bumped into a few by accident.

Facing a UN sanctions regime, and a sanctions committee that diligently followed the money trail, the danger was too close for comfort; the PFDJ and its partner, Nevsun, panicked. However, being foxy and panicky can be very compatible. Thus, the smart Nevsun-PFDJ partnership immediately decided to enlist the favors and services of Ms. Bruton and AC.

Thanks to his diligent and principled journalism, soon Mr. Léonard Vincent, the French journalist, wrote that Nevsun admitted to offering monetary “contribution to the Atlantic Council last year because [it was] impressed by their ongoing constructive work on Eritrea.”

“Nevsun made a contribution to the Atlantic Council last year because we were impressed by their ongoing constructive work on Eritrea. It is standard for a [for] profit company to make a gift to a research institute whose work relates to its business.”

While Ms. Bruton’s mind is wired to ignore reality, the Eritrean regime’s fate is being discussed by the UN and other world bodies who are debating whether to refer the regime to the International Criminal Court (ICC). But she insists on keeping the Eritrean regime on her makeup chair; since she appeared in early 2015 as a fierce defender of the Eritrean regime, she has been attempting to polish the face of the discredited Eritrean regime. Working as a lobbyist while hiding behind the AC “Think Tank” veil, so far, she has not cared to demonstrate a little objectivity and honesty.

Ms Bruton’s exerts the same efforts to promote the Eritrean regime as she does in discrediting the regime’s opposition. Worse, she believes she can address Eritrean issues while shunning the stakeholders, the Eritreans, from the debate.

The position of Ms. Bruton can be elucidated by the following statement:

“Our decision not to include any member of the Eritrean diaspora on the panel was intentional… the community tends to be very politically polarized (and there are so many contrasting points of view, even within just the opposition side).”

When asked to comment on the above, a veteran of the Eritrean struggle for liberation said, “Apologizers of the regime in Eritrea are continuing to sow seeds of discord among Eritreans and we have to expose them to the bone.”

The above open assault on the Eritrean quest for peace and justice has triggered an initiative by a few Eritreans who are writing a protest letter against “the aggression of Ms. Bruton and AC which seems to tolerate her masquerading as a researcher working for a renowned Think Tank as AC, when all she does is lobbying for Nevsun Resources and the Eritrean regime whose mining operations thrive on the slave labor of Eritrean youth.”

Last September when Ms. Bruton appeared in the congressional hearing of the House Committee on foreign Affairs, Subcommittee on Africa, she was not truthful when filling out the Congress’s Truth in Testimony form and failed to disclose that her work is funded by Nevsun. Because of that, according to our source, “staffers were disappointed she didn’t disclose the funding and told the Atlantic Council it will be banned from testifying in any proceedings in the future.”

As they say, a picture is worth a thousand words, and while Ms. Bruton continues to deny her financial relations with Nevsun, and her lobbying role serving the Eritrean regime, a picture of her together with a Nesvun PR officer in a PFDJ propaganda festival, tells a different story. The picture will remain a solid evidence of her involvement and interference in Eritrean affairs, as a propagandist. The picture also tells a lot about the propaganda scheme that Ms. Bruton is involved in; certainly, her involvement is neither research nor journalism. Unfortunately, she is siding with the oppressors of Eritreans and only advancing the corporate interests of her sponsors-–Nevsun. She has effectively aided and is abetting the party that forced the tens of thousands of youth to escape from their country and brave the Mediterranean Sea in pursuit of freedom and a dignified life. Along with Nevsun, she is collaborating with the entity that has been exploiting the tens of thousands of victims of slave labor.

Would Ms. Bruton rethink lobbying instead and make an honest living out of it?