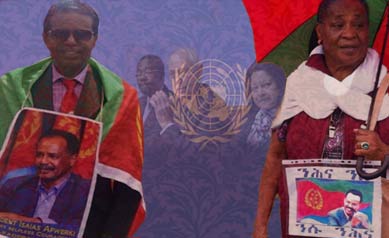 When searching for a list of the world’s worst known dictators, Google returns clusters of 10, 13, 20, 25, 100 with repeated names including Hitler, Mao, Stalin, Pol Pot, Kim Il Sung, Idi Amin Dada, Mengistu Hailemarian, Haileselassie, Robert Mugabe, Muammar Gaddafi, Kim John Il, Bashar Al-Assad, Fidel Castro, etc. Isaias Afwerki is rarely listed among them. An ordinary Eritrean who experienced horrific life under the rule of Isaias would wonder why he is not in the list. The curiosity driven objective of this article is to tag Isaias  so that he takes his rightful position in such lists.

Isaias Afwerki is an obscure dictator living in diplomatically isolated country. Until recently, he dodged the watchful eyes of the international community by creating an opaque system of governance that fits his excessive totalitarian rule. Once considered a hero and a charismatic leader, his psychopathic qualities were exposed soon after he formed the transitional government of the state of Eritrea. But his close associates knew of his character since 1966 when he joined the armed struggle. From the onset he rejected political pluralism and the exiled political forces.

Recently the interest on Isaias Afwerki’s regime grew when Europe faced refugee crisis and the UN assigned a Commission of Inquiry to investigate the human rights violation in Eritrea. According to UNHCR statists and EU’s registered asylum seekers data reveal Eritrea is a leading producer of refugees following Syria. Though the mandatory and indefinite national service is considered a push factor for the refugees, the one-man rule of the PFDJ regime and its repressive policies are responsible for everything that is happening in Eritrea.

With the limited information available to the outside world it is hard to put Isaias in his proper position; there is limited opportunity to know Isaias Afwerki’s real personality. For example, in an interview conducted with Al Jazeera, his psychopathic personality was clearly noticeable. When he was asked him about election he showed his aversion to it: “What election…?”

From 2009 onwards media outlets started to describe Eritrea as “the North Korea of Africa”. Isaias who was known as a hero, a liberator, and a promising African renaissance leader started to be called a “paranoid dictator”.

To protect himself he became isolated and that gave him a feeling of protection from accountability by the international system. On the pretext of self-reliance and national security, NGOs were expelled and news agencies were denied access to the country. This self-imposed isolation left the dictator embark on committing naked crimes against humanity.

A president who rules a country that has over 10,000 political and religious prisoners, and its people fleeing at a rate of 5000 per month for more than a decade, and which has more than 300 prison camps but with no university, a country that shuts all free press, detains a patriarch, that has no constitution, and that has imposed compulsory and indefinite military service, and is ruled by a leader who is accused of atrocities should be on the top of the list.

Why is the world ignoring him? Is he not considered a dictator? A Washington Post reporter shyly labelled him a merciless dictator: “Though he qualifies as a dictator, he prefers a humble style. (Washington post, 2009).

Of course there is logical reasons for not seeing the whole picture of Isaias’ tyranny. Reporters who get a chance to visit Eritrea are accompanied by minders masquerading as tour guides. It is impossible for the reporters to recognize the nature of the dictator. In fact the Washington Post reporter is right when he wrote that “…he prefers a humble style.” What can reporters expect when a president tells them “to leave him alone”, and when he responds to a question about elections by saying, “…three, four or more decades”. Individuals who visit Eritrea don’t fail to notice the bad situation. A Nigerian who visited Eritrea wrote for Vanguard wrote, “I was in Asmara in 2015 and saw a society stalled in time; weary-looking people in the streets who seemed caged and resigned to fate .” Outside the country, a one-year investigation conducted by UN Commission of Inquiry on Eritrea (COiE) issued its first report and stated, “the Commission found that systematic, widespread and gross human rights violations have been and are being committed in Eritrea under the authority of the Government. Some of these violations may constitute crimes against humanity.” Such limited information might not be enough to place Isaias in his right place among the notorious dictators. Nevertheless, the world is becoming increasingly aware through information coming from credible outlets.

In an article published in May 2016, Isaias was ranked as the 7th worst dictator. In 2009, he was ranked 8th just two places ahead of Muammar Gaddaffi. The first two worst dictators listed are Robert Mugabe and Omer al-Bashir, the first and second respectfully. When all the crimes he committed are revealed, there is no doubt that Isaias Afwerki will be on top of the list of the world’s worst world of 21thCentury.

There are ample resources that explain the character of dictators. Generally, the main criterion is mass killings/genocide committed through a direct or indirect order. A list of 13 worst dictators provided by Daily Beast gives the number of death toll as follows: Mao Zedong (45 to 75 million), Joseph Stalin (40 to 62 million), Hitler (17-20 million). They are ranked the 1st, 2nd and 3rd respectively.

Though killing of innocent people is the main consideration in defining a dictator, it is not the only defining factor. It is therefore mandatory to have holistic approach of characterizing dictatorship. Criterions like the absence of rule of law, freedom of expression, political plurality, freedom of religion, freedom of movement, and the rights to live are strong values that can define dictators.

Isaias Afwerki meets all criteria except there is no statistical data on the number of killings under his administration. However, there is no doubt that thousands of people are victimized.

An article published at www.awate.com on April 28, 2016 titled by “Nsu-nHn, nHna-nSu: we are One And The Same” written by Fanti Ghana nicely defined the characteristics of IsaiasAfewerki’s dictatorship. The author wrote, “Even by the strictest definition of dictatorships Eritrea is indeed run by an old-fashioned and harsh dictatorial rule.”

Though Isaias Afewerki’s dictatorship qualities seem to be unique, in an attempt to compare him with other known dictators, I am convinced he is the equal Francisco Macias, Pol Pot, and Nicolae Ceausescu.  Some of the basic evaluating procedures I used were were: political inclination/ideology, economic policies, education policies and anti-intellectual sentiments, militarization, ruling system, people’s mobilization, enemies considered, exercising power, killings, degree of isolation, treatment to fellow comrades etc. In almost all, dictator Isaias is equal to any the dictators mentioned below.