Asmara to Geneva: A 25-Years Journey 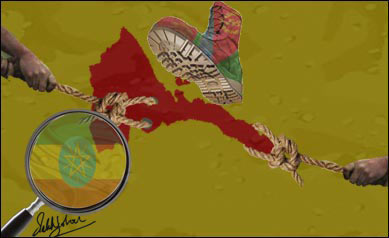 Clarance Darrow, the famous civil libertarian wrote, “No other offense has ever been visited with such severe penalties as seeking to help the oppressed.” He also said, “True patriotism hates injustice in its own land more than anywhere else.”

Eritrean patriots would attest to that; they have been facing injustice in their own land for too long. In addition, the last quarter of a century was basically an era of assault on Eritrean patriotism, inside the country and in exile. Now we have reached a stage where we have to seriously think about salvaging Eritrean patriotism.

For twenty-five years we went through the deafening propaganda of “protecting the sovereignty of the motherland”, but neither the sovereignty of the land nor the dignity of citizens was protected. Instead, Eritrea was exposed to untold miseries, pain, and sufferings. Fortunately, long gone are the days when the regime, its affiliates and operatives controlled Eritreans in their country and in exile. At last, the force that rejects the totalitarian PFDJ regime has reached a critical mass. Naturally, the immediate task awaiting free Eritreans is the cleansing of Eritrean patriotism, shunning adventurous military bravado, and rehabilitating those with thuggish behaviors—arrogant PFDJ character traits should be eradicated by all free Eritreans.

The last two-months were eventful.

On May 24, while some Eritreans celebrated the 25th anniversary of independence day, others spent the day reflecting on the twenty-five years that were stolen from them. For the latter, it was a time for a deep contemplation and reflection. Eritrea has been brutalized by the PFDJ. The balance sheet of the last quarter of a century ended in red, and with a huge liability. Twenty-five years of brigandage by the PFDJ regime has inflicted severe damages on the society. The pride that Eritreans maintained throughout the struggle era was besmirched and the names of heroes were defiled. Worse, the PFDJ dishonored and betrayed the tens of thousands who paid the ultimate price for the freedom and prosperity of their people. Since 1993, the group of liberators-turned-oppressors have destroyed the social fabric of Eritrea. They have exiled more people compared to those who were exiled or became refugees during the successive Ethiopian occupations. A dire situation that destroyed the dreams of youth prevailed. It proved to them that they can only dream outside the borders of their country which they have to brave risking being shot at and killed. Leave Eritrea they did, in their hundreds of thousands. The last quarter of a century was nothing but an era of terror where citizens are jailed for unexplained reasons, where they live under the mercy of petty-officers who control the lives and livelihood of the citizenry.

Dumbfounded Eritreans have never stopped wondering: what happened to the bravery of Eritreans, why did they succumb to the repression of a brutal homemade tyranny?

Twenty-Five Years On A Rollercoaster

The first decade of the 25 years was a tough uphill struggle waged to expose the corrupt nature of the clique that was tightening its grip to control the people’s lives. Standing against the regime was a costly position, particularly because chunks of the Eritrean population were euphoric and never believed the PFDJ was this bad. The few honorable voices who stood firm against the unjust regime were overwhelmed by the well-oiled and better organized voices of the tyranny and its gullible supporters. However, it was not in vain. By the year 2000, the totalitarian regime was exposed even if an Eritrean segment with a considerable number of people still supports it.

Unfortunately, still there are Eritreans known for their moral indignation. Worse, they keep blurring the lens of morality, muddying and diluting the obligation of patriots. Yet, they claim to be a benign silent majority! If that was the case, and they were really silent, they wouldn’t have inflicted so much pain and damage, but they did. And they were never silent. In fact, their silence was too loud to avoid detection. They pride themselves in belittling the years of struggle and sacrifice of others when they were fattening the tyrant that is chocking Eritrea. If not, they had turned deaf and mute and didn’t lend their voice when their people needed them the most. It’s disheartening to see this segment defending its ambiguous and immoral position on the Eritrean predicament. Yet, they shamelessly consider their despicable position a virtue that deserves respect and accolade. No wonder they share similar character traits with the clique running the totalitarian regime in Eritrea: naked arrogance.

Tm Is for Silence

Hussein Mohammed Ali described the behavior of the arrogant elements in one of his catchy songs: ምረኤካ? ትም! ምሰምዓካ? ትም! (What did you see? No answer. What did you hear? No answer.)

And humanity knows that silence in the face of injustice is not a virtue; no one should allow it to be peddled as one.

Oppressive regime might speak different languages, may have different citizenships, but their nature is the same. So is the struggle against injustice. That is why the Eritrean struggle waged against oppression before 1991 is not different to the struggle being waged against the PFDJ since 1991. Just like not every able person joined the struggle against the Ethiopian occupation; not every able person is likely to join the current struggle against the PFDJ. There were Eritreans who supported the previous occupation regimes, or were indifferent during the entire period. Today, there are similar opportunists and anti-struggle elements who have made a choice, willingly. I recognize their choice but I will not respect it, let alone reward it as a virtue or a wise decision as they try to position it. Every free Eritrean should identify them for what they are, without hesitation. They should be encouraged to inherit and embrace the old labels of the struggle era: Lackeys.

I have no qualms in stating that it is unlikely the entire Eritrean population will kiss up and adopt a similar view. But there should be a critical mass of dedicated, peaceful and patriotic Eritreans who should bond together in an alliance for the just cause. Similar to the past, marginal positions will surely be defeated in due time before the final stages of the process of reconciliation. Evidently, the forces of justice and peace have reached a critical mass.

After the above reflections that was stirred while watching the choreographed propaganda-filled celebrations in May 24, It is time to say a word about what is going on in Geneva.

First, I always held the view that as long as the Eritrean opposition remained confused on what it wants, victory will be a long and arduous journey. Naturally, clarity hastens victory. Over the years, we have seen the opposition embrace the true Eritrean flag—imagine how long it took to recognize that reality! One cannot fight Isaias by adopting his avatar.

The second thing that needs serious contemplation is the fact that change cannot be achieved easily without the participation of Eritreans inside the country simply because they are the major stakeholders. Gone are the days when some forces within the opposition portrayed the Eritreans army as if it was their militia while treating other opposition forces as if they hail from Siberia and have no relations with forces inside Eritrea, totally ignoring the political, social, and regional dynamics of any struggle. Now it seems the critical mass has realized that all Eritreans are equal stakeholders and no one should boss others around.

Between The Alps and Jura

Last summer, the Geneva demonstration assured Eritrean forces of justice that they have come a long way, that the tyrant would not last long if faced by the combined will power of all free Eritreans. The crowds that attended the Geneva demonstration in the summer of 2015 heralded a turning point in the current struggle against the PFDJ. Inspired Eritreans carried a chain of demonstrations from Israel, to Ethiopia, to the USA and elsewhere. Last year the main goal, besides a show of force, was to support the COiE. This year, on June 23 a huge demonstration will be carried out to support the same COiE and to appeal to the world community to ship the brutes of the Eritrean regime to the ICC—there are Eritreans willing to pay for their air-tickets unless the UN decides to teach them a lesson by forcing them to trek the Sahara, sail in rickety boats over the Mediterranean Sea to reach Lampedusa. Seeing them go through what they made thousands go through would have been fun if it was not cruel. And cruelty will end with the PFDJ, hopefully. But I have a disclaimer to make:

I pray the Eritrea capo and his clique would be apprehended and tried in Eritrea, by Eritreans; I am not a fan of outsourced justice. Furthermore, a trial in Eritrea would set an excellent precedent for the nation. A trail in a foreign land, would set a very bad precedent. However, for that to happen, we are in dire need of forces that would awaken the spirit of Wed-Ali, and the valor of Eritrean combatants. This time, they better do it right.