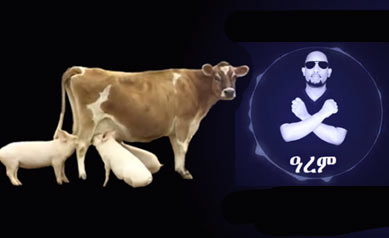 A few days ago a loyal friend of awate.com sent us a link to a song that was recently released. An unusual piece of music by Amanuel Yohannes. It’s a song without any interruptions of brass instruments.

A few days later, Amanuel Hidrat posted the song on the awate.com discussion forum. Immediately, Semere Tesfai transcribed the song in its Tigrinya form and made it easy to be translated into English.

The Tigrinya lyrics contain traditional farm terms that are not widely used in daily life outside the Eritrean countryside. And, certainly, the English translation doesn’t do justice to the real meanings of the words. We do not claim perfect translation, but it reflects the general message of the lyrics of the song. Enjoy the song.

Skinned calf, its hide is its sign,
Tying the legs of a cow with the hide of its calf

Someone! Tell her to hide the birth milk, its colostrum
Before its progenies perish for lack of a savior

No caring and compassionate protector
And moo, a faint voice
The milking pots are so many
And it thinks the unburied calf is still alive
Graft hide. Graft hide, graft hide

It didn’t even start to walk,
It didn’t taste its mother’s colostrum milk
They transformed the innocent calf into stuffed hide
And as if grief is not enough, it became a play-thing

Denied serenity even in death
When a hen can recognize its chicks!
But the beef cow nurses a monster not of her own
Living the usual life of injustice, renewed at every dawn
It sacrificed its calf and is fostering another, not of her own

They buried its bones, not leaving a trace
They stuffed its hide with straws of many kinds
They made it appear as if alive so the mother won’t miss it
They milked the cow dry, now they’ve started to suck its blood.

(The following is the original Tigrinya lyrics)