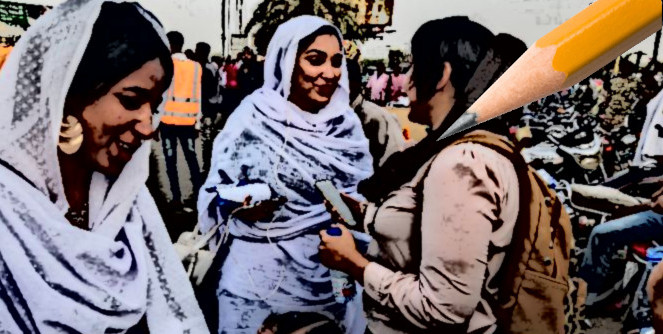 The current Sudanese protest is exceptionally significant due to women whose participation is unprecedented all over the world. For all intents and purposes, it could be dubbed the Womens’ Revolution—the Kandakas. In addition to burgeoning the numbers of the protesters, the Sudanese women have inspired many people in the region. But will they inspire a regi0nal struggle for the emancipation of women?

The Sudan is used to revolutions and coup d’etat. Throughout the last 64 years, since its independence from British rule in 1956, Sudan has been under the influence of the generals who led a number of coup d’etat. But the last military rule of Omar al-Bashir was the most brutal, the most destructive to the nation, and stayed in power for the longest period: 30 years.

The first Sudanese prime minister, Ismail al-Azhari, stayed for six-months and until he was replaced by Abdallah Khalil who served less than two years. And in November 1957 he was overthrown by General Ibrahim Aboud.

Six governments later, in October 1969 General Jaafer al-Numeri led another coup d’etat and was in power until 1971 when Major Hashim al-Atta led a communist coup against him. But the coup d’etat lasted for only a few days and ended when Gaddafi of Libya intercepted the would-be Sudanese prime minister’s plane when it was en route from London to Khartoum over Libyan airspace. The coup was aborted, Hashim al-Atta was arrested, and together with other members of his group, he was summarily court marshaled and faced a firing squad. Al-Numeiri regained his power and became more vengeful.

However, another communist attempt to overthrow Numeiri was made in 1975 by Brigadier Hassan Osman. But Numeri’s supporter, General Elbagir, managed to abort the coup and in a matter of hours al-Numeiri was back  in full control. General Hussein Osman and his collaborators were executed.

Still, in 1976 al-Numeiri faced another attempt against his regime by forces loyal to the Umma Party of Sadiq al-Mahdi; in the process thousands of people were killed in Umdurman and Khartoum. al-Numeiri arrested the plotters and 96 of them were executed.

In 1983 al-Numeiri declared Sharia law that focused on cutting hands and capital punishment. By doing so, he alienated many people, mainly the Southern Sudanese. He also hanged Mamhoud Mohammed Taha, a prominent thinker. Two years of tense situation followed and in April 1985 General Suwar al-Dahab led a coup and deposed the government of al-Numeir who was in New York. Suwar al-Dahab brought al-Numeiri’s madness to an end and promised a civilian government in 2 years–he kept his promise

In May 1986, an election brought Sadiq al-Mahdi back to the premiership. However, in June 1989, he was ousted by General Omar al-Bashir, who was allied to Hassen al-Turabi’s  National Islamic Front (NIF). The thirty-year long al-Bashir rule had begun. Finally, in April 2019, al-Bashir was ousted by the army after five months of popular protests.

Is it a continuation of the military culture?

Sudan is not new to political upheavals and its history is replete with revolutions and ousting of governments by the military. Now, many observers are skeptical if the Transitional Military Council (TMC) would ever return to the barracks leaving the government to the civilians.

On June 17, the US Department of Justice disclosed that Lt. General Mohammed Hamdan Dagalo “Hemeti” has signed a $6 million dollar agreement with Dickens & Madson, a Canadian lobbying firm operating from Montreal. However, it’s not clear whether the lobbying firm is tasked with polishing the image of the TMC or with the difficult task of rehabilitating the damaged reputation of Sudan!

A few weeks ago, Lt. General Mohammed Hemeti stated that Sudan has 30,000 soldiers in the Saudi-led force waging a war in Yemen. Also in June, the Libyan government showed prisoners caught while fighting alongside Hifter, the retired Libyan General who is backed by the Saudi-UAE-Egypt axis, and is fighting to defeat the Libyan government and take power. The Libyan television identified the captured Hifter combatants as Chadians and other Africans. However, some sources indicated they are actually Sudanese soldiers under the command of the UAE that uses them as mercenaries in its wars in the region.

And that Sudanese involvement is creating channels for funds flowing in to Khartoum from the major financial powers of the region. Observers believe that the more the TMC plunges into the regional quagmire, the more difficult it will be for it to retreat and hand over power to the civilians.

The Ethiopian mediation and the hurdle

In the first week of June, Prime Minister Abiy visited Khartoum, met with the TMC and the protesters, and offered to mediate between the two sides. Both accepted the offer and the Ethiopian PM appointed Ambassador Mahmoud Derir, a senior Ethiopian diplomat, as his envoy to mediate. So far, backed by the African Union, the Ethiopian mediation has made progress and the brokering efforts has reached its pinnacle—details are expected to be announced anytime now. However, the coming weeks will show if the harvest will be enough to usher the much-needed peace and freedom. Again, it all depends on the honesty and dedication of the TMC and the protesters alike.

However, notably, when the Ethiopian initiative that’s supported by the African Union was announced, Isaias Afwerki of Eritrea lambasted the AU mediation but came short of criticizing the Ethiopian involvement. That reservation was expected for two reasons: 1) he has made a peace agreement with PM Abiy and it was sponsored by the Saudi and UAE leaders, 2) he is sailing carefully not to step over the toes of his Saudi Arabia and UAE sponsors.

Nevertheless, on July 5, 2019, the Sudanese agreement between the protesters and the transitional military council (TMC) was announced with little details.

Between March and early April, the Eritrean foreign minister has visited six countries carrying letters from his president, including one to King Salman of Saudi Arabia, the main sponsor of the regional governments.

On May 20, Osman Saleh and Yemane Gbreab met General Abdulfetah al-Burhan, and in June 13, al-Burhan received the Eritrean ambassador to Sudan who carried a letter from Isaias Afwerki. On June 14, 2019, al-Burhan visited Asmara and met with Isaias Afwerki. On July 3, 2019, Lt General Mohammed Hemeti visited Asmara and met Isaias Afwerki. And insiders informed awate.com that Isaias has an advise to the Chairman of the TMC and his deputy: “don’t be intimidated by the threats of the toothless UN, EU, or AU organizations, we survived the sanctions by ignoring them all.”

Isaias doesn’t want the TMC to relinquish power and he would rather have them stay put. And the TMC knows he has a leverage in Sudan—he has been hosting and training Sudanese opposition groups for years and finally helped them negotiate a peace deal with al-Bashir. In recent months, Isaias’ intelligence has convinced the Islamist and other forces in Eastern Sudan to rally behind the TMC.

Is the Sudanese protest in its final days?

The protesters had called for a general protest for Sunday, June 30;  a day earlier, on Saturday, the TMC warned the protesters and opposition groups they will be held responsible for any violence. However, the demonstration which was dubbed “a million person march” went ahead with at least 4 dead and dozens wounded.

The negotiations were stopped after the protests that claimed about 100 lives and many more injured. On July 5, the mediators announced a breakthrough has been reached and details of the power sharing agreement will be announced on Monday, July 8. And since then, many Sudanese have been celebrating, albeit cautiously, the agreement reached between the protesters and the TMC.

Reports indicated that an agreement was reached to form a government of technocrats where the two sides will be represented by 5 members each, then they will jointly elect an 11th member who is expected to be the leaders of the government.

The agreement also stipulates that the TMC will lead the council for 21 months, after which the protesters will lead it for 11 months. However, the investigation of all the massacres since the removal of al-Bashir in April is expected to be a sticking point because the findings will require action against the perpetrators who could be in power. Also, many opposition leaders are concerned whether the agreement will lead to a complete purging of ex-officials of the ousted al-Bashir regime.If that goes well, Sudan will move on the road towards full civilian rule by the end of 2022.

So far, at least two rebel groups have rejected the agreement: Minni Arco Minnawi of the Darfurian, Sudan Liberation Movement (SLM), and AbdelWahid al-Nur a leader of a faction of the SLM that split in 2004 at the height of the Darfur genocide. Minnawi has joined the coalition of the protester while AbdelWahid remains defiant.

Sudan has been in an Internet blackout since June 10, but some smuggled footage shows the brutality against civilians by the Rapid Support Forces (RSS) is continuing. It was reported that while the meeting between the TMC and protesters was going on, the RSF broke into the opposition offices in Khartoum and mishandled those who were there.

According to a source, “Even the Saudi and UAE sponsors had to the warn the TMC to stop the brutality” because the people perceive the two countries are corrupting the TMC by channeling funds and encouraging them to stay in control.