We Must Be Able to Look Like The Tigre 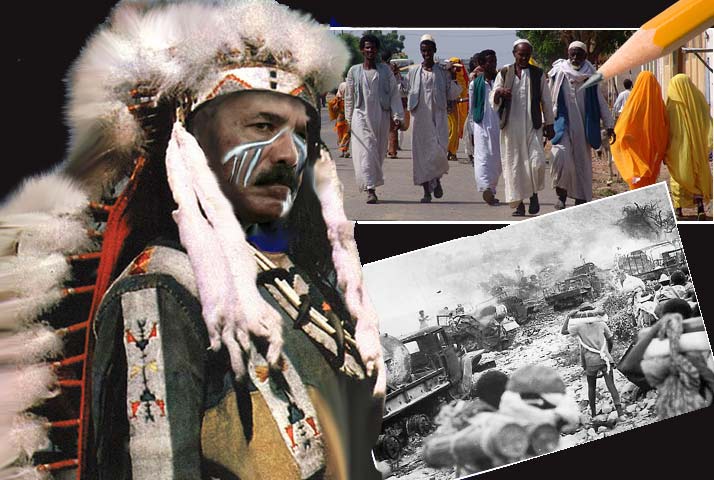 “We must be able to look like the Tigre…”
Solomon Berhe, chief of the PFDJ chapter in Dallas, Texas.

Since May 24, 1991 when Eritrea became independent, the anniversary became more and more polarizing with each passing year. While the supporters of the Eritrean ruling party framed the day as an occasion for propagandic celebrations, and attributing the independence of Eritrea to the repressive regime, as if it achieved it single-handedly, others, including the veterans of the arduous struggle, consider the day an occasion to lament, remembering the lost opportunities, coupled with the betrayal of the Eritrean cause. Yet, both agree on the significance of the day.

Independence days is celebrated all over the world, mainly in events “centralized” and controlled by the government’s operatives, in “community centers, which in reality are chapters of the ruling party, though camouflaged as a hyphenated “Eritrean civic and cultural association centers.” The loyalists who run those outfits do the regime’s bidding and often engage in obnoxious acts, including extortion, collecting illegally imposed taxes from Eritrean, defaming opponents of the regime, and anyone perceived as disloyal to the regime.

As soon as the regime loyalists finish celebrating May 24, they embark on preparing for the yearly summer festival: those who perform the yearly pilgrimage to Eritrea participate in the major events there, while those who couldn’t travel, attend in the parallel festivals that are held in one city in every continent. Eritreans who are held hostage by the regime to secure consular services, pertinent to passports, properties, inheritance, etc, make sure to attend the festivals to remain in the safe books of the regime. However, though many people observe a serious deficiency in the make up of the attendants in such events, the regime and its support base do not seem to seek a genuine solution for their embarrassing failure to organize a representative attendance that reflects the Eritrean diversity–entire social groups do not feel welcome in such festivals.

Worse, in their attempt to hide such embarrassing situations, the callous regime and its supporters, who claim to have a diverse support base, have failed to prove its claim. Yet, to cover up the glaring deficiency, they delve into foolish and more damaging practices.

Unfortunately, the thread of Eritrean unity is getting thinner; it’s being stretched by the repressive situation that the ruling party has created and is perpetuating. Social mistrust that is exacerbated by the regime is one of the main reasons behind the failure of Eritreans to redeem their country from the yoke of tyranny. Mistrust is also one of the reasons for the incompetence of the Eritrean Opposition forces which reflect the social Eritrean divergence. Sadly, the national unity that Eritreans cemented during the long struggle for independence is being damaged by the incompetent governance and lack of basic freedoms in Eritrea. Consequently, entire social groups have abandoned the regime which in its twenty-five years of rule, has failed to even acknowledge the deteriorating social cohesion or show some interest in a national reconciliation.

The regime that is guided by the maxim of “Might is Right”, rules Eritreans with the might of the gun. In the process, it has marginalizing social groups, criminalized political organizations, suffocated civil liberties, and made Eritrea a pariah nation that jumps from one battle to another, gets entangled in regional military adventures, and  continues its unabated assault on the freedoms of the Eritrean citizen.

So far, Eritreans have shown admirable restraint and have refrained from violently facing the regime. But social patience is not without bounds though the regime considers patience a sign of weakness; anxious Eritreans dread imagining a day when patience might run out—persistent repression cannot continue unchecked, and certain forces might be tempted to resort to violent means to regain their dignity and usurped freedom. In short, if a spark of violence ignites, considering the volatile region where Eritrea is located, there is not telling how far and how fast the fires will spread, and it may prove to be difficult to extinguish.

The government’s idea of upholding the rights of social groups is limited to showcasing their folkloric dances. It’s endless make-believe gestures of music and dancing by cultural troupes cannot substitute a genuine embracing of Eritrean diversity. At the moment, the actions of the regime and the apologetic postures of its Diaspora affiliates in defending its catastrophic policies, is only limited to invoking derision—and that cannot continue indefinitely. A few Eritrean social groups have been feeling insulted for too long.

The so-called “Eritrean civic and cultural association centers” around the world have never organized literary events, or meaningful social, or political debates and dialogues, except the all-night long party of drinking, singing and dancing but is doing unimaginable damage to Eritrean unity.

The American movie industry solved the lack of black and Native American actors by pretensions; the core group of the ruling party seems to like the idea of pretensions. If the regime is short of supporters from a certain social group, its loyalists will masquerade as members of the lacking social group. It is like what Hollywood did to resolve the lack of native American and black actors: adorn a white actor with feathers, and draw random lines on their faces, or smear their white faces with black shoe polish–never mind unpainted pink linings that remain under the eyelids and the lips. That is what it takes to have someone masquerade as a black or Native American actor. For instance, Isaias Afwerki donning a leather jacket full of feathers doesn’t make him a native American, even if he can ride a horse. The PFDJ regime is playing that trick to remedy the lack of diverse Eritrean support base.

Sadly, the loyalists never ask why their meetings doesn’t look like an Eritrean gathering! They wouldn’t ask since they are conditioned to believe that Eritreans who do not support the regime must be traitors and hirelings in the payroll of this government or that agency from the enemy-list of the regime. That is why they have no qualms in making outrageous statements or devising embarrassing acts to hide their shortcomings–they would rather masquerade as Eritreans from the missing social groups instead of trying to find a genuine solution that would enhance the Eritrean unity.

This year, the summer festival in the USA will be held in Seattle, Washington. Loyalist centers across America have been assigned ethnic groups and regions they will represent. According to a loyalist, “major cities will represent the Saho social group, or the Hedareb, Blen, Afar, or any other groups, and all Eritrean diversity will be at full display in Seattle.” The preparation for the summer festival is in full gear.

On April 29, 2017, a meeting was held at the misleadingly named “Dallas Eritrean Civic and community center”, and it was attended by regime loyalists. The leader of the ruling party chapter of Dallas announced, “Sawa area was assigned to Houston while Tigre of Sahil [is assigned] to Dallas.”

That came in a newscast aired by a local “community” radio host who stated*, “Ato Georgio, Habteab, chargé d’affaires of the Eritrean government in Dallas gave a short statement, and then Ato Solomon Berhe, the Secretary of the Eritrean cultural and civic center, gave a speech…”

Solomon Berhe, the secretary of the “Eritrean civic and cultural association centers” stated:

“Sahil is assigned to us [Dallas]. We will represent Sahil, [to show] how Sahil looks like and its people… Houston has taken Sawa, and we [Dallas] … have taken Sahil… whatever clothing you have [addressing the women in the audience], meaning, representing Sahil, or Tigre…like Adere [an Ethiopian cultural dress], something that reflects that, you tell us ‘I have this and that’, and you bring it here so that we can take it along [to Seattle]. That is because we must be able to look like the Tigre, the men among us, [we should bring] the white… what is it called, is it Luwyet? [someone in the audience shouts, Jellabiya] Those who have Jellabiya [white robe], we should dress in Jellabiya and when we travel [to Seattle] we must look like Jellabiya–we must look like them. So, we are working on it starting from now. And every Saturday we will be here [in the center] starting from 5 O’clock. Anyone who wants to participate or wants to perform in a play, is welcome…. And those of you who were in Sahil, you can tell us about Sahil…”

This is an illustration of how the ruling party and its loyalists treat the sensitive issue of Eritrean unity and social diversity. And one cannot help but wonder: who are those who have “to be able to look like them”, or like the people of Sahil? Why do the PFDJ groupies fail to attract the people of a region (a major bastion of the Eritrean struggle) to the extent that they are forced to play the role of the people of Sahil?