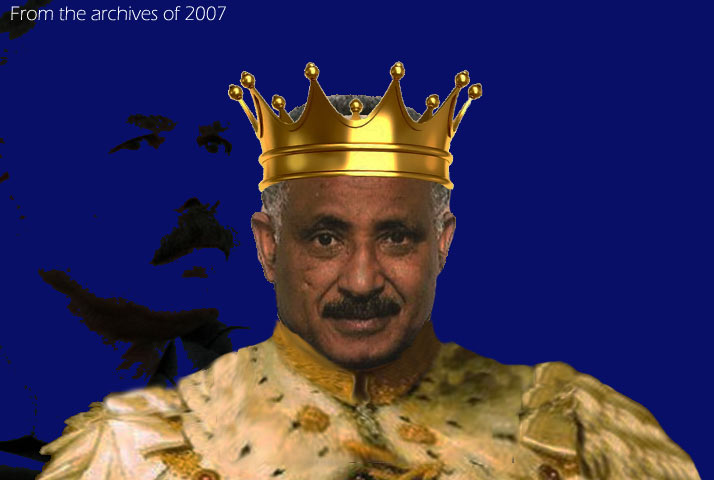 Today’s archive material is a Gedab News report from November 8, 2007. Since then, at least once every year, an imminent military confrontation between Eritrea and Ethiopia was expected based of reports and rumors. And since the last war stopped [in 2000], the two countries are still going through a no-war-no-peace situation, while the Eritreans opposition still remains in disarray due to its own incompetence and hindrances of different external forces executing king-making projects (The Awate Team, June 2, 2017).

Since the Eritrea-Ethiopia Peace Agreement of 2001, there has not been a period where one side or another has not warned of the dangers of a breakout of war between Eritrea and Ethiopia.  Indeed, given the proximity of the two battle-tested armies; the poisonous political environment between the two governments; the inability of UN Mission in Eritrea and Ethiopia (UNMEE) to carry out its mandate fully; the inability of the Eritrea-Ethiopia Boundary Commission (EEBC) to carry out its mandate fully and other factors make any announcement of potential war seem credible. However, it is also true that the claim “war is imminent” has been used for political ends whenever it serves the interests of authoritarian governments and it is important that their claims be scrutinized—even when it seems to be buttressed by prestigious organizations like the International Crisis Group (ICG.)

Politicians use war for political ends.  Whenever the possibility or likelihood of war is raised, President Isaias Afwerki has been fraying the nerves of Eritreans so long as it serves his interest.  Sometimes, he claims that “war is imminent”.  Sometimes, he downplays the likelihood of war to a point where he describes it as impossible.  He never gives facts, evidence or explanations for his prophesies—they are declarations that achieve their desired goal: mobilize his followers towards whatever the goal of the moment is. Sometimes it is fundraising; sometimes it is merely to change the subject from irritating questions like long bread lines and generals shooting at each other.

Most Eritreans have learned to ignore the state media and to rely on independent sources for their news and information. Lately, there have been a slew of reports all projecting war within weeks and all citing the International Crisis Group as their primary source.
The ICG has a reputation for reliability and quality work—but is it always right?  Who authored the piece that carries its name? Was it written recently or was it written a while ago and updated recently? These are questions we have asked of ICG that we hope to receive answers for. We hope the ICG will be transparent about its report-writing process and what, if any, role was played by one of its senior advisors, Mr. Andeberhan Woldegiorgis.

ICG lists Andeberhan Woldegiorgis as a senior advisor who is based out of the Nairobi, Kenya office. What his role was in writing the report is highly relevant because (a) he had, until recently, held senior positions in the Eritrean regime and (b) he has a history of alarmism.

What is noteworthy about Andeberhan Woldegiorgis is that, unlike his predecessors who left the PFDJ, he has yet to renounce the party or show remorse for his role in the creation of Eritrea’s full-fledged dictatorship. He simply left quietly through the revolving door of government to the NGO world, with nary a word for his shameful role with the PFDJ. Indeed, he was one of the coordinators of the so-called Hizbawi Mekete (popular challenges) that were held in Europe where the PFDJ envoys did all they could to shift the attention of the people from democracy and human rights to the dangers posed by Eritrea’s so-called “internal and external enemies.”  It would not be surprising if an individual with such a history was serving the same purpose, albeit now for a different employer.

Equally important is his alarmist history when he was Eritrea’s Commissioner for Co-ordination to UNMEE. One episode stands out: in 2001, he wrote a complaint to the UN claiming that 250 Ethiopian soldiers held a military attack at the Eritrea’s police and militia forces in Gegew on November 30, 2001.  The UN investigated the matter and concluded that “The Temporary Security Zone (TSZ) between Eritrea and Ethiopia is said to be calm and stable, despite accusations of violations.”

It should be noted here that awate.com is not making any claims to having any knowledge on whether the likelihood of war between Eritrea and Ethiopia is less or more than it was a month ago or a year ago. We do not think it is coincidental that some of Eritrea’s armed groups (barely mentioned in the ICG report) have recently accelerated their military campaigns. The point is that if the recent news reports about the imminence of war are entirely based on the ICG report and if Andebheran Woldegiorgis had a hand in penning the ICG report, then there is every reason to believe that the report is trumped up and written to meet the political objectives of Eritrea’s ruling party—a party that he has failed to disassociate from. It should be studied more critically before the inevitability of war becomes a self-fulfilling prophecy.