David and Goliath Not a Myth 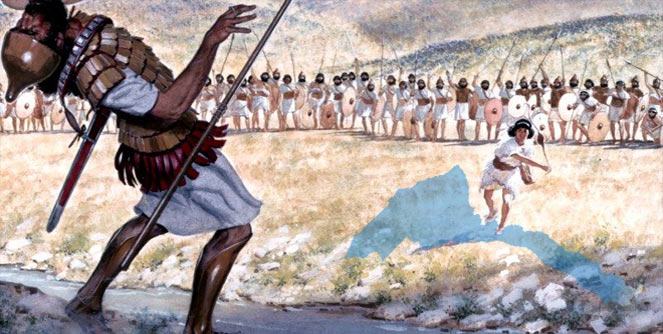 As a reaction to what appeared on Negarit yesterday under the title,  “Eritrea, the not-so-tiny-Tiny Country”, Haile S., an active awate forum member made the comments below that we found worthy of more exposure. Haile built on what appeared on Negarit and expounded on it with additional, and new, explanations regarding what ails Eritrea. His addendum will certainly enrich the original article and invigorates the debate.

The most pleasing thing for a writer is when a reader provides feedback, or input, that surpasses the importance of the original article. Haile’s comments are far superior to the original article and the author thanks him. We have provided links to the Negarit article because we believe, as a commentator suggested, both should are complimentary of each other and should be read as one–Haile’s post provides an added value to the topic.

We are hereby presenting Haile’s post with minor edits. We appreciate Haile’s rejoinder and we are thankful to him. The following are Haile’s thoughts on the topic///Awatestaff
____________________

Saleh, you are in your elements of justified sublime pride of Eritrea and your Keren, and you have all the reasons to spell the grandeur of both. I am here not to challenge you, but rather to expand and add some of the reasons that glued this adjective to Eritrea.

Our regime and ourselves are the first culpable.

A) we made Ethiopia a Goliath to win big, but we discontinued becoming David.

B) we said we never kneel down, but we stopped rising up.

C) we said we are proud, but just inflated our chest, but forgot Eritrea’s chest.

D) we said we have over 1000 kilometers of the sea coast, but functionally we downsized it a swimming pool.

H) we complain about being the victims of everybody, but we never came together to first reflect on our self-victimization and to own our failures and build upon them.

I) we haven’t truly embraced our diversity. What made Eritrea what it is, is its diverse population, but we constantly undo the little cohesion that starts to grow, by looking to other transborder kinships. So, the outsider sees our tiny fragmentations. Why would they consider us big when we fragment and want to adhere to the big neighborhood?

J) our regime is the tiniest in the world, with no ambition for itself, for the country, for its people and most importantly, for its youth. It prides itself in making its citizens labor for nothing till the nails crack, instead of letting them labor for their own and for their country’s good. The Eritrean regime has ministers who are still learning to be ministers, for the last 27 years. Responsibility is parenthood, yet, our ministries and administrations look like sterile parents.

K) Many of our citizens are shy (putting it nicely) to say they are from Eritrea. I know acquaintances who systematically answer, “I am from East Africa” when asked where they are from, instead of answering proudly that they’re from Eritrea. Instead of googling it on their cellphone to show anyone who asks them doesn’t know about Eritrea–which is mostly the case. Needless to mention, the use of ‘tiny’ by those who wanted us to disappear as a country.

Finally, Eritrea is considered tiny because it is in a standstill tiny-economy since it was a province of Ethiopia. Instead of growing it is suffering from citizen and youth-pyrosis.

Yes, Saleh, I agree with you Eritrea is the 99th biggest country in the world had it not been for the regime’s and our own fault.

Here’s the link to the original Negarit post: “Eritrea, the not-so-tiny-Tiny Country”,