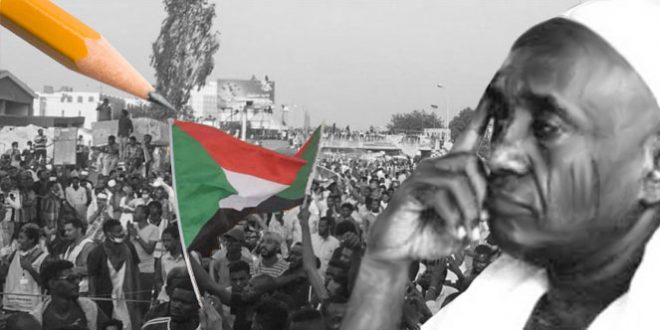 The Horn of Africa is still in turmoil and the earth is moving under the feet of the incompetent regimes of the region. Alas, the rulers seem to be in a race to outdo each other on how fast they can turn their countries into rubble and sit on the heap.

Somalia is painfully walking towards a mirage of normalcy. Djibouti feels content and secure with the foreign muscles that its feeble bones cannot carry. Ethiopian leaders seem to be more interested in show business than in governance. Sudan is trying to break free of the Islamist rule and recall the spirit of its reformist Mahmoud Mohammed Taha whom Jaafer Numeiri hanged in January 1985. Yemen is still under the relentless bombing initiated and sustained by Saudi Arabia and the UAE. Eritrea continues to be pulled towards the quick sand by Isaias Afwerki while it is sandwiched between Sudan, Ethiopia, Djibouti and Yemen. In brief, the word “Bleak” doesn’t describe the region correctly anymore.

The region has its own homegrown elements of instability, but the imperialist ambitions of Saudi Arabia and the UAE makes it more dangerous—particularly the rulers who dream of a day when they would make the UAE “The Empire on which the sun never sets.”

For many months Eritreans have been anxious over the developments in Ethiopia whose prime minister has ignored their sufferings, and downplayed the fact that Isaias Afwerki is tormenting them. But lately, the Sudanese crisis shifted the radar off the Ethiopian matters, giving the lucky Abiy Ahmed a break from attracting media attention and thus, less scrutiny.

After four months of popular protests, last week the pressure on the Sudanese regime was intensified forcing it to give in to the demands of the relentless and disciplined protesters. Finally, the protesters succeeded in unseating  their long-time dictator, and the military yielded and detained Omar Al Bashir along with a few of his accomplices.

A day later, “the military council” brought in Ibn Ouf, another soldier, to replace Al Bashir. By midday, Ibn Ouf declared a dusk to dawn curfew and a transitional period of two-year after which he promised to hand power to a civilian government. That didn’t go down well with the protesters who increased the pressure. Ibn Ouf stepped down after just one day. And he named General Abdelfattah, the third most senior general in the Sudanese armed forces, to replace him. Ibn Ouf is known to have led the Sudanese troops fighting in the Saudi-UAE led war in Yemen.

The new military council stated it will lead the change towards a civilian government and its spokesperson said, “we are the children of General Swar Al Dahab”, the revered general who ousted president Jaafer Al Numeiri’s regime in 1985 in a similar unrest. Swar Al Dahab is best remembered as a patriot and a soldier with integrity who kept his promise by handing power to the civilian government of Sadiq Al Mahadi’s after a one-year transitional period. But in 1989, Al Bashir overthrew the elected government of prime minister’s Sadiq Al Mahdi and launched his rule that continued for 30 years, until last week.

The Sudanese protesters, mostly youth under 30, are still camped in front of the army headquarters in Khartoum. They do not show signs of settling down before they see the dissolution of the ruling National Congress Party and the arrest of its leading officials. They are also calling for the removal of Hamdan Dagalo, aka, “Hemedti”, the head of Sudan’s Rapid Support Forces (RSF), and a member of General Abdulfattah’s military council. Hemedti’s paramilitary force is believed to be an outgrowth of the notorious Janjaweed militia that committed atrocities in Darfur, and it provides soldiers to the Saudi-UAE led war against Yemen.

In Eritrea, Isaias Afwerki has ruled in a similar manner to that of Al Bashir’s rule, though there are some differences between the two countries. Eritrea doesn’t have a constitution, it is ruled by proclamations, and there is no semblance of institutions. The country is solely run from the president’s office by loyalists who answer only to Isaias Afwerki, who can demote and promote them at will. The security situation is also tighter with no room for freedom of expression or even mild dissension. Worse, in Eritrea the government is engaged in rampant violation of basic rights of citizenship. And in the absence of a court system, suspected dissidents and unfortunate victims are thrown in jail indefinitely without charge or visitation rights.

In the recent few months, the Eritrean ruling party’s diaspora support base was almost completely decimated by the growth in the numbers of Eritrean dissidents who are either new refugees or were fence sitters. The few examples mentioned below are indications of the major shift in the support base of the ruling party.

Almost all Eritreans concur that the situation in their country is untenable, it cannot continue because it has reached its limits. However, in the absence of institutions, divided political outlook among Eritreans, and fear of the unknown is making it difficult for them to act. Yet, there is a general consensus on what should be done to rid Eritrea of its nightmare, and there is a recognition that there is a dire need for a serious planning and preparation. Nonetheless, it is probably easier if Eritreans follow the “Manual written by the Sudanese protesters.”

It’s inevitable that at this moment, only the military can take an action to oust Isaias Afwerki’s regime. However, whoever makes the move should be careful not to gamble with the stability of the country to avoid risks to lives and properties. Eritreans expect the removal of the regime and the handing over power to the people. But that is easier said than done, though undoubtedly Eritrea have an opportunity to tread on the right path and implement justice from Day One. And the following suggestions might help.

The PENCIL is awate.com's editorial and it reflects the combined opinions of the Awate Team and not the individual opinion of team members.
@@awate2
Previous Angesom and an Army of Volunteers
Next Negarit 40: ከም ባቢሎንዶ ኴንና! – !هل اصبحنا كالبابليين – The Babylonians’ fate!