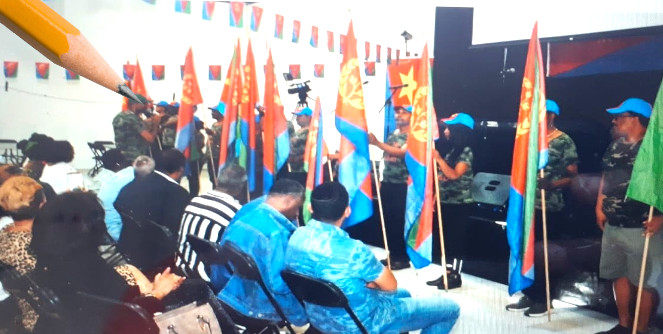 In recent years, the number of Eritrean refugees and asylum seekers in Europe has increased drastically. Most of them claim to have escaped from the harsh indefinite military service imposed on them by the, “Peoples’ Front for Democracy and Justice” (PFDJ), the Eritrean ruling party.

The unelected PFDJ government has been in power since 1991; it is the only political party allowed to operate in Eritrea. The PFDJ is intolerant of any dissent to the extent that it has imprisoned veterans of the struggle and senior government officials due to their dissenting views. However, the imprisoned were never charged with any offense, and together with hundreds of others, most have been in jail for decades.

Out of the tens of thousands of refugees and asylees in the Diaspora, Norway hosts about 23,000 Eritreans. A considerable number among them are recent arrivals from Eritrea and have applied for asylum claiming to have fled from the oppressive military service in Eritrea.

On August 3, 2019, many of the recent arrivals who claimed to have fled rejecting the forceful service at Sawa military camp, were at the Bryn Eventhallen in Oslo to celebrate the 25th anniversary of the same Sawa military camp they fled from. Yemane Gebreab, a senior official of the PFDJ, whose official title blurs from presidential advisor, to the chief of the PFDJ’s diaspora youth organization, to shadowing Osman Saleh, the foreign minister, flew in from Eritrea to attend the Eventhallen celebration.

Many Eritrean exiles, particularly Eritrean Norwegians were furious about the ungratefulness of the refugees to Norway that accepted them with open hands and compassion.

As if confirming their claims were lies, many staged a show, at the Eventhallen, clad in military fatigue and PFDJ paraphernalia. The event was spiced with marching band music and lots of flags. And together with the guest of honor, Yemane Gebreab, they danced off the night promoting militarism thousands of miles away from the place where they claimed they fled from to avoid the indefinite military service.

The event raised many eyebrows after Norwegian media reported it, and it triggered a debate between Norwegian parties, mainly by those who want to curb immigration.

A source told awate.com the Norwegian Justice Minister has instructed the UDI (immigration department) to investigate the cases of those who have been granted asylum on false pretensions.

It’s likely the UDI will investigate people who pays the 2% tax to the PFDJ regime, those who travel to Eritrea on green passport in violation of the 1951 UN Convention of providing travel document to refugees, and those who promote the regime they claimed to have fled from.

Professor Kjetil Tronvoll,  a well-respected Norwegian scholar, was quoted by Sputniknews.com as saying: “It’s paradoxical… some people celebrate the regime, because they are regime supporters, even though they have been granted asylum on the grounds of feeling the regime.”

The Norwegian Justice Ministry is likely to investigate  and revise the applications. Thus, the residence permits of many who were admitted to Norway on false claims could be revoked. Norway though a welcoming and tolerant country, it is very strict on falsification of immigration claims. It’s known to have expelled several longtime residents and achievers because they had made false claims in the past.

Eritrean Norwegian activists are determined to cooperate with the authorities to help identify falsifiers in order to protect innocent immigrants from being wrongly affected by any decision.

Since the last few weeks, suspected falsifiers are overwhelmed by anxiety because they never considered the possibility that authorities could pursue them seriously in the future for any false claim.

In addition to the falsifying, and in total disregard to the conditions of their acceptance as asylees, many of them travel back to Eritrea with Green Norwegian passports, and report on the activities of dissenters. They also harass and intimidate anti-PFDJ elements in the diaspora.

Though shooting of photos and videos was not allowed at the August 3 event, many clips were leaked and found their way to social media platforms. Since the last few days, those whose pictures appeared are frantically trying to pull off the images from social media platforms without much success.

A longtime citizen of Norway wondered, “how can one leave his country because of the oppression of the regime and then celebrate it with pride!”