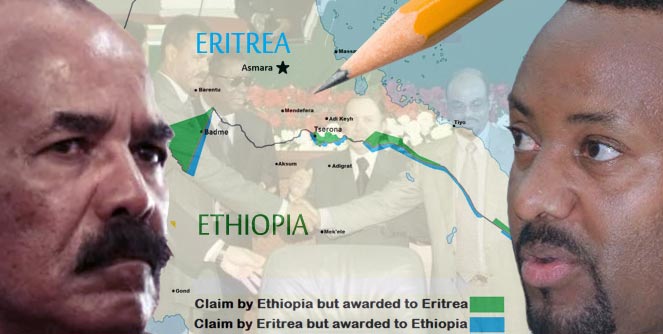 Ethiopia has come a long way. In the last fifty years, it traveled the longest distance from where it started compared to many African and Middle Eastern countries. The Epic journey took it out from the darkest abyss of a feudal system lorded over by Emperor Haile Selassie, through a bloody Dergue Marxist revolution that finally brought Colonel Mengistu Hailemariam, through a tough rebellion that brought the downfall of the Dergue regime in 1991.

In parallel, Eritreans fought for self-determination to break free from the grip of the feudal Ethiopian empire. They started the struggle 20 years before Ethiopians began their fifty-year journey. and they came out victorious in 1991. Eritrea was liberated, so was Ethiopia. Sadly, the Eritrean misery continued under the rule of the liberators-turned-oppressors.

In 1991, the two countries started from identical situations, but Eritrea took a different path, one of domination and curtailing basic freedoms and human rights. It is still marred by many crises and is ruled by the mentality of rebellion and a guerrilla mindset. However, both the Ethiopian TPLF and the Eritrean EPLF were inflicted with the same malady; both believe in military might and absolute power. And unbeknownst to the citizens of the two countries, the relations between the two allied guerrilla entities that came to power in 1991 were deteriorating; the waters that looked calm on the surface were boiling below. That was a natural cause for the two years of bloody confrontation that ensued.

However, while Eritrea stayed a single party, a militarist country, Ethiopia started to walk the challenging path of democratization, against all odds. While the Ethiopians persistently challenged the ruling party and inched their way ahead, the Eritrean ruling party made sure no opponent remained standing to challenge it.

As recent as two months ago, the Ethiopian power center shifted from one entity within the ruling coalition party, the TPLF, to another, the OPDO, and to a certain degree to the EPDM. TPLF, the founder, and architect of the EPRDF party had its nails clipped and its political influence drastically downsized in a lightning speed. That change brought the dangerously fast-moving new Prime Minister, Dr. Abyi Ahmed. Since his election in April, the PM changed so many things to the extent that the face of Ethiopian politics seems to have had a drastic facelift and doesn’t resemble the face of Ethiopia before he was inaugurated.

Understandably, he was catapulted to power by the youth whom his party rallied behind. They were the formidable force that protested against the statuesque and dictated the unprecedented change of attitude among the political elite. Since his inauguration, Dr. Abiy has been hopping from one place to another, roaming the country, meeting with people, explaining his vision, and soothing the low morale of Ethiopians, and launched an admirable process of healing the political rifts.

Among the drastic steps he took, some are phenomenal. Recently he oversaw the retirement of senior military officers, appointing new ones, and reinstating other Ethiopian commanders who were discharged dishonorably—he recognized their national services, reinstated their military titles, and honorably moved them to retire with full rights. To some, that could seem a minor undertaking, but the psychological and moral boost it gives Ethiopians, and the moral authority it attached to his leadership, is gigantic.

Dr. Abiy’s vision for the economy, where the major banner is the privatizing of the Ethiopian Airlines, the most successful African airline, and the privatization of the telecommunications sector, among other economic establishments, has gained him the support of world financial markets, investors, and funders alike.

The swift moves were not limited to his internal activities. Externally, he has cemented Ethiopian alliances with Sudan, he has travelled to Egypt and massaged their egos, giving them the assurances regarding the flow of the Nile waters, his gestures and diplomatic statements forced the Egyptian media to go gaga, the same media that was up in arms against Ethiopia during the presidency of Mursi, agitating Egyptians against the Ethiopian renaissance dam which they claimed will slow the flow of the Nile River and force Egyptians to go thirsty! In addition, he launched his vision for a bigger cooperation among the regional countries which he spelled out after his recent visit to Somalia. So far, he has harvested a $3 billion aid from the Abu Dhabi Fund for Development (ADFD) that was announced when the UAE heir apparent visited Addis Ababa on Eid Day.

However, there remains a thorny issue on his table: the unresolved Eritrean-Ethiopian boundary. So far, he has promised to respect the EEBC ruling and the Algiers Agreement and pull out Ethiopian forces from occupied Eritrean territories. Given the situation in the border areas, and the rivalry between the PFDJ and the TPLF, his statement is easier said than done, though this time, many hope he will prevail over the petty competition that cost the region immense loses and irreparable damages.

For the last 20 years, Eritrea has been living in a no-war-no-peace situation, a pretext that the Eritrean ruling party used to turn the entire country into an open-air prison where the youth suffered the most. They are still victims of indefinite conscription, arrest without warrant or trial, and the killing of their dreams for a free and better life. In addition, the economic meltdown has impoverished the people and the Eritrean economy has not expanded one bit in the last 20 years. Unemployment is rampant, corruption, nepotism, and abuse of power is so widespread it is suffocating the citizens who leave Eritrea in their thousands in search of freedom and opportunities.

Eritreans mainly blame their ruling party that failed in basic governance and diplomacy, and in navigating the corridors of world power. It stayed mediocre, failing to produce fine statesmen since it forced itself to the seat of power. Twenty-seven years after entering Asmara victoriously in 1991, its guerrilla structure is still intact defying reason and adamantly refusing to change, and it’s still controlled by the struggle era generation.

Unfortunately. Peace and War in Eritrea have been governed by the relations between the Tigray rulers and the Eritrean rulers. Whenever they were on good terms, the rest of the people suffered, and when they were at loggerheads, the people suffered equally. But this time, even Eritreans who gave the TPLF generous benefit of the doubt are questioning the real motive of the rulers of Tigray.

In the last 20 years, the TPLF has managed to cripple the Eritrean opposition, creating client organizations along regional and ethnic lines. It has presided over the ritual of fracturing the Eritrean cohesion and now it seems ambivalent, not clear what it will do next.

On August 26, 2015, in an editorial entitled A Glance to the Past A Focus on the Future, The Pencil stated the following:

Badme has been the cause of many small conflicts for over three-decades; in 1997 it became a flash-point for a major war [with] a colossal human crisis…. Ethiopia seems hell bent on not relinquishing the village without a dialogue to fine tune the borders of the [EEBC] court decision; Eritrea seems hell bent on continuing to scream “Badme” regardless of the expected outcome. In the meantime, the small real-estate holds the livelihood of millions as a hostage. At this moment, any sane person would choose to resolve the issue after a normal situation prevails in the region.

Prime Minister Abiy is somehow reiterating the same circular position unless he manages to pull the Ethiopian troops from the Eritreans territories as stipulated in the EEBC ruling. But that doesn’t seem in the horizon because the Tigray ruling party (TPLF), a partner in the ruling Ethiopian ruling party (EPRDF), is stating in so many words, that dialogue is the underlying precondition. It is a standstill unless the stalemate is creatively broken.

We have addressed this deadlock many times before and we will reiterate our past position once more.

If there is a genuine wish to resolve the impasse, instead of handing the case to jingoists and politicians with narrow agendas in a silver platter to exploit, then there is a common-sensical way out. There is no official difference of views between the two countries as far as the EEBC ruling is concerned, except in minor places in the central sector of the boundary which is virtually demarcated–a cheap GPS would show every inch of the territory, and where every village lies, and what its fate is according to the EEBC ruling . However, neither Ethiopia nor Eritrea has publicly published the names of the villages that are the cause of the much-publicized political quagmire.

Nevertheless, we would like to emphasize that the proposed solutions do not resolve the underlying cause of the war in itself: currency, money laundering, illicit trade, internal interference, etc. However, we also believe what is being debated in both countries is a good starting point towards normalizing neighborly relations.

Finally, we have said it in the past, and we say it again, that the close to 95% of the undisputed boundary should be immediately demarcated, and if there remains a minor section of un-demarcated boundary, around Zalambessa, Tserona, and Irob region, where the affected villages that risk displacement are located, the issue can be discussed with a commitment to resolve it in many ways, within a fixed time span so that it doesn’t drag on indefinitely. This, we believe can be accomplished in a few weeks time if not in a few days. Thereafter, the two sides can leave the issue behind and the two people can focus on what really matters: peace, cooperation, and development projects.