A Glance To The Past, A Focus On The Future 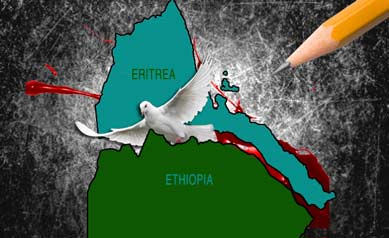 Eritreans have a myriad of unresolved internal issues to worry about external ones. However, all of the problems and crisis hindering the creation of an effective opposition force to unseat the tyrant is not totally their fault. Frustration has been building among Eritreans who feel like they are adding water to a barrel with a hole in it.

Though the politically correct Eritreans would restrain themselves from criticizing Ethiopia, even mildly, the Awate Team has never stopped from mentioning the grievances that are causing frustrations among Eritreans. Ethiopian officials are infatuated with offering their patronage to select individuals, overtly and covertly,  since the Eritrean opposition set shops in the country. At times, their choices have been political lepers at best, and unknown, untried individuals at worst. This editorial attempts to explain the fear of the unknown, the protection of national interest, and the aspiration of Eritreans in general. It hopes to shed light on the main issues that are behind all the murky and unproductive relations within the opposition, as well as the view of many Eritreans on the topic. Of course, this doesn’t diminish the humanitarian appreciated support that Ethiopia is offering to Eritrean refugees, and the educational opportunities that some young Eritreans are enjoying. However, today we will address only the sticky political issues–lacing it with gratitude and indebtedness to Ethiopia for its support will make it sound insincere.

Basic decency and prudent politics restrain governments from interfering in the business of other countries. Undoubtedly, human values also encourage people to be compassionate, friendly, and loyal to their neighbors. And the line that separates acceptable and detested interference is very thin. Hence, the need for diplomatic protocols that spell out articles that govern the relation between countries, since the cause of most conflicts is interference in the pursuit of national interests. However, sometimes countries may see the need to safeguard their national interest by pursuing an aggressive foreign policy which might have serious consequences. To avoid that, countries sign bilateral, trilateral, regional, and international agreements and treaties in order to regulate their relations and to minimize conflicts of interest.

Though both Sudan and Ethiopia have equal interest in Eritrea, and all of Saudi Arabia, Yemen and Djibouti are less interested in comparison, the Eritrean-Ethiopian relation is at the top of the foreign policy list of both countries. Understandably, that is due to the strong cultural and historical relations between the two countries. But, should that link annul the other Eritrean relations with other neighbors, as some believe and insinuate, or it should be given its due, fair, and balanced weight? The two major components of the Eritrean population are fearful of two hegemonic projects. The Muslims fear Abyssinian and Christian hegemony while the Christians fear  the Muslim and Arab hegemony; the fear has now developed into a full blown crippling phobia bordering on sectarianism.

Given the fact that most of the historical conflicts in the region were fueled and ignited in the highlands of Eritrea and Northern Ethiopia, are the conflicts caused by rivalry and competition among kinfolks, as some describe it, or is it the fear of others that fuels the conflicts?

Unfortunately, the nature and gist of the conflicts in the region have remained the same: primordial allegiances and rationalization with feudal tendencies and characteristics. But such rifts are not new to Eritreans whose interests and social connections are deeper than meets the eye. Every time the rift showed its ugly face, the inner will of Eritreans has prevailed in defeating it. However, the 24-year old tyranny of Isaias Afwerki has denied Eritreans the opportunity to face such problems in a free environment, inside their country, by referring and falling back on their rich traditional conflict resolution mechanisms. Hence, open debates about national issues, including peace and coexistence, is entrusted to the exiled Eritreans who are trying their best to find solutions to their predicament. And since the Ethiopian-Eritrean relation is the main topic that occupies the mind of the average Eritrean and Ethiopian, relative to other relations, what happens in Ethiopia influences the Eritrean mindset; to a lesser extent, what happens in Eritrea concerns the average Ethiopian. Therefore, it’s our wish that Ethiopians see their Eritrean policy in this light because policies can either incite, provoke, or prevent conflicts that might lead to dire consequences.

As a major debating and opinion-making platform, awate.com has always been walking on a thin line to avoid trespassing on issues that many consider strictly external. However, the blurred thin line is so enticing to walk over. In addition, it’s difficult to discern whether certain issues are internal or external in nature. At any rate, what are the internal and external Eritrean concerns in regards to Ethiopian issues and vice versa?

Though Ethiopians and Eritreans went through a never-ending history of rivalry and violence, they have also seen occasional misleadingly calm years caused by mischievous alliances that are at the root of the instability in the region. In fact, the Abyssinian region played a major role in most of the conflicts of the region–it’s where oppression was unleashed, and where imperialism was expanded, with far-reaching adverse effects on the entire population of the two countries. A critical assessment is certainly a great social service for a stable future.

If we take the devastating border war of 1998-2000 between Eritrea and Ethiopia as a sample, we realize that seventeen years after the guns became silent and the war-cry was muffled, the aftermath of that conflict is still crippling the communities of the border areas–though the Eritrean side is suffering the most. Unfortunately, the role of the Eritrean opposition, that supposedly should alleviate the problem by ending the Isaias era of tyranny, is irrelevant.

The Eritrean opposition is a continuation of the pre-independence nationalist liberation struggle, but unfortunately, it is immersed in debilitating conflicts. Unfortunately, a sizable number of Eritreans believe Ethiopian officers handling the Eritrean opposition share a big chunk of the blame; another group absolves the Ethiopian officers of any damage on the opposition. Still others list a myriad of abstract causes to explain why the opposition is weak. At any rate, the Eritreans opposition finds itself marred by suspicions and conspiracy theories that are native to that specific region. Naturally, Ethiopians have similar views on the state of the Ethiopian opposition that Isaias has been nurturing and building. Therefore, it doesn’t hurt to address one problem at a time.

The Abyssinian influence on the opposition organizations of the two countries is evident–the elite does not see each other outside its primordial conflicts. The overwhelming number of the elite of the two sections of Abyssinia cannot see anything outside the Amharic-Tigrinya language spheres, and the Orthodox Christian prism. The rest of Eritreans and Ethiopians are always relegated to the role of fueling the mad and costly rivalry, dying in the endless wars that were imposed on them. At this moment, it seems as if the struggle to unseat Isaias is entrusted to the Eritrean highlanders and the rest are consciously absent and not interested in the ongoing conflicts. That doesn’t bode well for the unity of Eritrea.

The above historical realities still play an important role in shaping the current state of our region’s perceptions. However, it is suicidal to choose to live as a prisoner of the historical fallacies. The region needs to be forward-looking, it needs to chart a progressive, aggressive development strategy that would free the region from the historical bondage. That will surely help it tread towards peace, stability and development. But first, Eritreans need to clean their own house.

The following are a few  critical issues that cry for resolution:

The Awate Team hopes the above points will provoke serious debate and discussion among the stakeholders. Since these are sensitive issues, it is advisable that those with thin skin and intolerant characters stay away from such a debate.