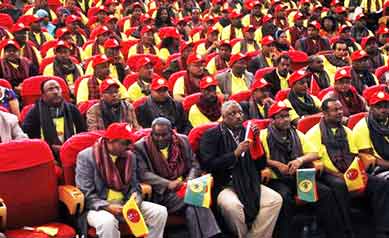 August 28, 2015: the tenth conference of the ruling Ethiopian People’s Revolutionary Democratic Front (EPRDF) opened today in Mekele, the capital city of the state of Tigray.

The four major parties that form the EPRDF coalition had earlier held their respective congresses and the Mekele congress will chart strategies at the federal level.

According to Walta information, Prime Minister Hailemariam stated that the efforts of the “past five years have enabled the country to be self-sufficient and we have paved the right track to leap forward and take the country to a middle income level.”

The conference that will be adjourned on August 31, will assess the first Ethiopian Growth and Transformation Plan  (GTP) and plan for the second GTP which mainly focuses on alleviating poverty.

About two-thousand people have come to Mekele to attend the congress. They include representatives of ten countries, political parties, reporters, guests of honor, and veterans of the Ethiopian struggle against Mengistu Hailemariam’s Derg regime that ruled Ethiopia until the EPRDF dislodged it in 1991.

Over the last few years, the EPRDF was under pressures from several Western countries to normalize relations with Eritrea. The relations between the two countries has remained in a state of no-war-no-peace since the end of the two-year devastating border war in 2000.

In an unexpected move, the EPRDF invited the Eritrean Democratic Alliance (EDA) to the Mekele congress. Jemal Saleh, the current leader of the EDA, an umbrella of about a dozen Eritrean political organizations, delivered a speech in which he described the plight of Eritreans living under the PFDJ rule, the exodus of the youth feeling the indefinite forced conscription, and called for more sanctions against the Eritrean government.

An Eritrean journalist who covered the congress said that Jemal dedicated most of his speech to “praise the EPRDF” instead of taking advantage of the platform to focus on the main message of the Eritrean opposition.

Jemal Saleh is the leader of  the Democratic Front for the Liberation o f Eritrea (SAGEM), an organization that is the founding member of the EDA.

A leader of an Eritrean opposition organization told Gedab News, “this is significant because it means the EPRDF could have decided to limit its recognition to the EDA that represents political organization, it must have realized the ENCDC with its hodge-podge composition has damaged the opposition.”

In 2011, EDA created the Eritrean National Council for Democratic Change (ENCDC) in an attempt to enlarge the umbrella. However, it became a platform for power struggle and inaction due to many reasons, mainly because most of its members are “individuals and self-described Diaspora civil associations who shouldn’t compete for power against political organizations.”

Meanwhile, Gedab News learned that several discussions are going on between EDA member and non-member opposition organizations to reconcile their differences that mainly erupted over the creation and membership of the ENCDC. The opposition leader said, “at this time, the Eritrean opposition can only be saved by strengthening the EDA or creating a similar alternative umbrella.”

There are serious discussions between the EDA member organizations and the EPDP and others.