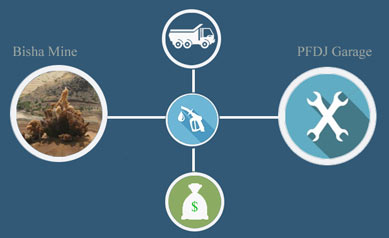 Last week, the government of Eritrea closed its main garage in Asmara and stopped all transport trucks that hauled ore from Bisha to Massawa.

Bisha Mining is a company jointly owned by the Eritrean government and Nevsun Resources of Canada.

The ruling party owns and operates the car and truck repair garage, which also sells spare parts, vehicles, tires and other related items.

The vehicle repair and maintenance business is almost a monopoly. All public vehicles are not allowed to be repaired in privately owned garages who face difficulty in getting spare parts, unlike the ruling party owned garage where civilians are also forced to have their cars repaired.

The personnel of the garage are implicated in what the government has called “diesel swindle.” Apparently they have a role in rationing of diesel to hauling sub-contractors. Several people were arrested in connection with the “diesel swindle.”

Ore is transported over land for about 300 kms. from the Bisha mining concessions to the Red Sea port of Massawa for export.

Our sources reported, “the security forces discovered diesel being distributed on the black market, and they traced it to a hauling track sub-contractor.” Subsequent audits found huge discrepancies between the diesel the sub-contractor received and what his truck could have actually consumed in the trips it made from Bisha to Massawa.