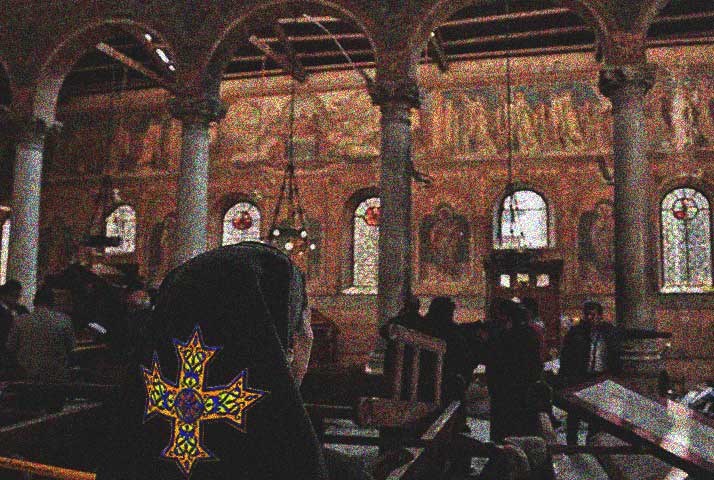 Amid tight security arrangements, and guarded by nervous armed Egyptian officers, funeral services were held for the victims of the two terrorist attacks that targeted churches in Tanta and Alexandria.

Attendance at the funeral ceremonies was limited to the relatives of the victims and church officials.

The latest attack targeted the Mar Girgis church in Tanta in Lower Egypt, and the entrance of the St. Mark church in Alexandria on the Mediterranean Sea coast, where Pope Tawdros II led the service.

A policeman was also killed in the church blast in Alexandria.

The Islamic State (ISIS) has claimed responsibility for the two attacks that came about three hours apart.

Following the deadly attack, Egyptian President Abdulfatah Al-Sissi announced a three-day national mourning period and a three-month state of emergency which will take effect after fulfilling some required constitutional requirements.

Last week, Al-Sissi was on a state visit to the USA and met president Donald Trump.

On December 2016, a suicide bomber has killed 29 people and damaged the grand Coptic church in Cairo.

In 2010, as the Arab Spring demonstrations were getting stronger, another such church attack by extremists left scores of people dead and wounded. At the time, some observers suspected Mubarek’s interior minister, General Habib Al-Adly, of complacency in the New Year’s Day attacks on Saints church in Alexandria.

The alleged plot aimed at pressuring the late Pope Shenuda III and others to distance themselves from the Arab Spring demonstrations that aimed to topple the president Hosni Mobarek regime. The minister was accused “of deliberately releasing prisoners in order to show [there was] chaos in Egypt.” The 2010 attack killed 24 people and wounded 90.

According to Egyptian reporter that when he came to power, Al-Sissi ordered the release of Habib Al-Adly from jail.