Calling For An Eritrean Resolve 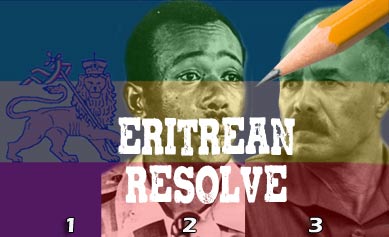 A country whose situation is becoming worse by the day. A people who are so exhausted of simply watching as their social cohesion is being eroded. A regime that convinced Eritreans that it will never change. A president who has never said an encouraging word in all his speeches and interviews. A president who never spelled a word of reconciliation, or ever assured his people to be hopeful. A political culture that is defined by arrogance and brigandage not diplomacy and statesmanship. Officials who are so arrogant they embarrass the humble Eritreans. Cult followers who like to ignite wars and confrontation they or their children will never fight. Egoist individuals who directly or indirectly promote sectarian, regional, and partisan discourses and poison healthy debates. A fragmented opposition that has so far failed to inspire the people. Neighbor countries who complicate the Eritreans situation and who do not seem to be interested in ameliorating it. Such is the situation of Eritrea. It’s bleak. Eritreans are used to hardships and calamities, and that will not weaken their resolve, but it reminds them of the urgency of the matter.

The political organizations that are stationed in Ethiopia are in a precarious situation. While one side of the opposition is busy attempting a hostile takeover of the leadership of the opposition, the other side has failed to take decisive action to move on. That crippling drama is all happening under the ever-watchful eyes of the “Sanaa Forum.” As a result, the perception of the common Eritrean activist about Ethiopia is not improving. Meanwhile, the relation of the common Eritrean activist with the Eritrean opposition is not improving. And for a long time, these two damaging issues are the main problems that the Eritrean opposition has been handling haphazardly.

And as usual, that, and other issues, are the causes for today’s edition of The Pencil.

Whenever the topic of changing the repressive system of governance is discussed among Eritreans, two divergent and controversial views are raised: change carried out by internal forces vs. one affected by external forces. No doubt the regime has succeeded in paralyzing the two camps into complete inaction. Ironically, a chunk of the Eritrean opposition (in its broader definition), still seems to play by the PFDJ rules—if not by choice, due to lingering behaviors.

The Eritrea regime believes that those who support and internally controlled change (by the people and/or the army), are lackeys of the USA, Ethiopia, or any other country the regime is attacking at a given time. The USA and “Weyane” (Ethiopia) have been occupying the top of its most-hated list for a long time.  However, the PFDJ leaders’ “hate” is basically an expression of the grudges they hold against their arch-rival, the TPLF, which is the major partner in the Ethiopian ruling EPRDF coalition, while the USA is often times referred to as CIA, or, simply by a wild card like “Susan Rice”, for example.

Undoubtedly, a considerable number of Eritreans strongly oppose any Ethiopian intervention in their country’s affairs. However, the emphasis on the almost two-decades long militant objection to the intervention, is more of an imagined intrvention than real. Likewise, the regime has effectively used the Weyane-scarecrow to freeze a considerable chunk of Eritreans into inaction. Ironically, the regime hosts an array of Ethiopian opposition groups with political goals that unfavorably eye Eritrean territories and sovereignty. Worse, these forces are the political inheritors of the old Ethiopian regimes that Eritreans fought for decades to rid them off their country. Clearly, for the PFDJ, its supporters, its sympathizers, and those it holds hostage or blackmail through personal interests, the rejection of Ethiopian intervention in Eritrean affairs is not driven by principles, it is rather an attempt to have their names in the safe security list of the regime. That way they ensure their meager investments are secure, they can visit or vacation in Eritrea and return without being molested by the regime’s security.

The above mentioned Eritrean segment also faces a moral dilemma: they do not utter a word of objection to the regime’s horrific treatment of the Eritrean population. On the contrary, they blame the opposition for tiny and insignificant skirmishes and accuse it for promoting civil war, and “killing our brothers”! They never criticize the regime, but they repeat whatever it approves of to secure the needed blessing by its security officers and host of worldwide spies.

It is even worse: the same group would openly outsource solutions for the Eritrean crisis to foreigners without feeling guilty, but they would be enraged by the idea of Ethiopia funding some opposition elements. Ironically, many of them are beneficiaries and are funded by Western countries in the guise of…many facades.  This website holds that unless it is Eritrean money, the Ethiopian Birr, the US$, and any other currency is equally external, it’s foreign. There can’t be a difference between a British, an American, or an Ethiopian donor. Equally, there is no difference between Italian, Sudanese, Egyptian, Ethiopian, or Belgian intervention. If one is willing to accept funds from any other country, there is no plausible explanation why they cannot accept it from Ethiopia.

And the Awate Team says this without any fear of repercussions—this website has never received funds from outside sources apart from the funds provided by its founders, its supporters, and its closest friends. In short, it’s purely Eritrean funded. It is also important to note that even if we asked for funds, we are not likely to be offered any; simply, we do not fit the special criteria of the known funders who usually approach others with offers: “can we help?”  No one is saying that to awate.com. At any rate, we are in the middle of a fundraising to collect $12,000, of which we have already collected roughly a third.

The Past Due Change in Eritrea

It would be honorable for Eritreans to save their country on their own instead of risking the carrying a feeling of humiliation for years to come if they remain spectators in what happens to their country. If the repressive situation lingers on, it is likely that others would be forced to intervene to protect their interest. Neither the Syrians, or the Libyans, or the Somalis, or the Iraqis wanted to be immersed in the bloody situation they are in. It is not the people’s choice but the choice of those who can. Unfortunately, the PFDJ is busy trying to find more creative and more effective ways to engulf Eritrea in chaos. It’s busy devising ways to fully emasculate the people and completely own their will, choice, and freedoms. At this juncture of the Eritrean history, the only honorable way would be for the brave to take charge and bring about a solution. If a so-called national army cannot defend the rights of its citizens, what is it? If a so-called national army becomes a tool and an enabler of a repressive regime, does it deserve loyalty at all?

Thus far, Eritreans have maintained goodwill and great respect for their armed forces, the army that is considered the inheritor of the great Eritrean liberation forces. This immense respect should not be taken for granted and the army needs to reciprocate, to pay back for a fraction of that loyalty. Importantly, it should live up to the fame and dedication of its precursor—it has a name and a history to protect.

What the UN and other institutions are doing is not something insignificant, it is relevant to Eritrea. However, any activity that is not controlled by Eritreans is simply peripheral. This is important to spell; the recent developments and the way many in the opposition treated the COiE activities as a vital and critical milestone is an example! First, it should be known that this is a station on the long journey of the struggle and we should not expect to achieve anything more than exposing the regime and isolating it: Initially from the few gullible supporters it still maintains, and secondly, from the few foreign sponsors and careerists. Considerable success has been achieved in both aspects and that deserves to be celebrated. However, no national activity should be totally outsourced—be it politics or law. That should strictly remain in Eritrean hands.

Going forward, emotions should be shunned from the Eritrean struggle. The struggle against the PFDJ regime should be based on realistic considerations and expected possible outcomes. Furthermore, the opposition should stop considering every station as the final station on the journey. To attain victory, Eritreans would need to align all their forces along clearly defined goals: justice is the natural rallying point. So far it has worked for the opposition. Amateurs should be kept under leash; the embarrassment they cause the opposition is more damaging compared to the marginal benefit they bring to it. The opposition needs to stop treating the activities of the struggle as an entertainment, or as a pastime. It’s not done for fun, it is a serious hard work, it is not a platform for ego trips and red carpet type parading.

In Geneva, there was a considerable presence of professional activists, presentable individuals who had their skills and talents by the grip, but that was not enough. That wouldn’t have happened if every little entity (and individual) was busy with self-promotion at the expense of the grand project. It was the opposite of that. And that is what the organized opposition needs to compete on and adopt. For without a developed, functional political parties, the final result of this struggle might be disastrous. The conclusion is: there is no going back to Isaias and his bunch of enforcers, the regime is beyond redemption.