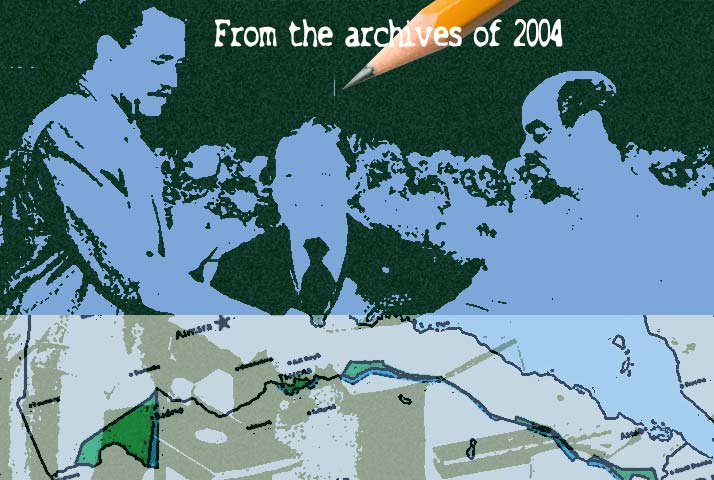 Seventeen years after it was signed, the Algiers Eritrea-Ethiopia peace accord remained elusive. Fifteen years after the Eritrean Ethiopian Border Commission ruling, the border is not yet demarcated. Five years ago, Ethiopia’s Prime Minister Meles Zenawi died. The professor who was the president of the EEBC, Sir Elihu Lauterpacht, died three months ago. Two months ago, the President of Algeria, Abdulazziz Bouteflika, who oversaw the signing of the Algiers peace deal, turned 80. Isaias Afwerki, the un-elected president of Eritrea turned 71 and is still ruling the country.

In recent months, some interest groups have been revisiting the issue of the unresolved border between Eritrea and Ethiopia—and it seems that the EU and Ethiopia are pursuing a certain strategy. On this occasion, we thought of bringing you today’s thirteen years old editorial (Nov. 26, 2004) to prove that the people of the region, particularly those who inhabit the border areas, have been subjected to walk on a wheel like lab mice.{The Pencil, May 4, 2017]

It is now clear that the proposal for peace that we have submitted earlier has not managed to secure the desired sustainable and durable peace. Hence, it has now become imperative to seek a peace proposal which takes into account current realities and which will help motivate those that are forces for peace. It has become necessary to rectify, those aspects of the original peace proposal, which have had the effect of undermining the efforts of those committed to peace and to present a new proposal which would help strengthen the struggle for peace. – PM Meles Zenawi, address to Ethiopian parliament

As substantial as Prime Minister Meles Zenawi’s peace initiative is, we think the rationale for Ethiopia’s reversal of position is just as important.  In his address, Meles Zenawi provides two explanations on why Ethiopia’s position (rejecting the EEBC ruling) should be reversed: first, Ethiopia’s development partners (Europe and the US) were insisting on it and second, Eritrea’s “forces for peace” (the Eritrean opposition) were, according to “various sources,” finding it difficult to work for sustainable peace (get rid of the PFDJ) in light of Ethiopia’s position regarding Eritrean sovereignty.

As varied as the reaction of the Eritrean body politic will be–from the instant and euphoric support of the Eritrean National Alliance (ENA) to equally instant and disdainful rejection of the ruling party (PFDJ); the nature is the same: it is reactive.  Once again, the fate of Eritrea is being negotiated between Ethiopia and its development partners who are, for the most part, the very same “various sources” that articulate our views.

We have been calling for dialogue because we strongly believe that almost any problem is soluble if people have the willingness to solve it.  We already know that it is not in PFDJ’s nature to negotiate peace but we strongly believe that any organized and credible Eritrean opposition group (the stronger and more unified the better) that had the courage and political maturity could have negotiated precisely the same peace initiative that is being proposed by Meles Zenawi now. This would have instantly elevated the Eritrean opposition leaders to statesmen, PFDJ alternatives, and would have rendered the Eritrean government instantly irrelevant.

Ironically, our skepticism bordering on paranoia of “foreign intervention,” our avoidance of dialogue, invites the very same foreign intervention we fear.  We are reduced to accepting or rejecting initiatives and treaties we had little hand in creating. We have no sense of ownership and because the deals are negotiated without our input, we get even more anxious and suspicious of the foreigners.  And the cycle is repeated.

Two years have passed since the EEBC ruling: two whole years that we Eritreans remained bystanders in our own affairs as we said that the matter is “between Ethiopia and the UN” and “Ethiopia and the guarantors.” Ethiopia and her development partners have proposed another initiative–and if there is any doubt that this was developed with input from the partners, one need only check Meles Zenawi’s itinerary and the prompt statement of support from the partners, and all we have to do now is support or reject.

Although this change is largely the result of Western powers, any fair analysis will show that the Eritrean opposition played a part, albeit small but persistent, in Ethiopia’s reversal of its position.  We know of no Eritrean political organization that has not called on Ethiopia to abide by the EEBC ruling. The approaches were different: some opted to lobby Ethiopia’s development partners to explain the position of the Eritrean people; others, at the risk of having their patriotism impugned, chose to directly engage the Ethiopian officials. At the end of the day, while welcoming Ethiopia’s position, we hope that all of us reflect on whether this could have been achieved much earlier if we had a strong and unified opposition speaking with one voice.

The need for a strong, unified voice is going to be even more pronounced in the weeks and months ahead.  Again, we think the preferred mode is direct engagement of the Ethiopian government. The issues that the Ethiopian government wants to discuss during the demarcation phase deal with (a) the root causes of the conflict and (b) the actual placement of the pillars and how these will affect the people who live in these localities.

Our powerlessness has empowered Europeans and Americans to conduct dialogue-by-proxy on our behalf. This same powerlessness should not prevent us from granting the un-elected and illegitimate Asmara regime proxy powers to negotiate on behalf of Eritrea, if ever it gets around to go beyond its impulsive rejection of the initiative.

The issue of exploring the root causes of the conflict was one of the three requirements of the Algiers Agreement.  (The other two are the establishment of the Boundary Commission and the establishment of the Claims Commission.) Although the Algiers Agreement stipulates that the root causes will be limited to the period of 1997-98, we think the Eritrean opposition has the right and the duty to present Eritrea’s case for the root causes of the conflict, going back to historical events.  This is by no means binding, but since the intent is to bring about an enduring peace, we think the Ethiopian government should hear from its peace partners on events that may have contributed to the ill-will that has been allowed to be promoted amongst the people.

Similarly, the Claims Commission had established that there were egregious human rights violations on the part of the Eritrean and Ethiopian governments in the conduct of the wars of 1998-2000. This report, which was issued in mid 2004, was selectively published with each side only publicizing the war crimes of the other, for propaganda purposes. We think it would accelerate the healing process, and promote peace and discourage all future wars, if both sides not only blamed the other but also acknowledged the part of their countrymen in these war crimes.

Finally, the previous position of the Government of Ethiopia and the various responses of the Eritrean opposition groups, were used as wedge issues to distance each from the other and thus hinder the formation of a consolidated and cohesive Eritrean opposition group. With our beloved nation being decreased to a non-entity by the day and the motives of the Government of Ethiopia now better clarified, we call on the opposition groups to work even harder to bring about a strong and effective resistance, and a peer-level co-operation with our neighbors, to rid Eritrea of the scourge of PFDJ.