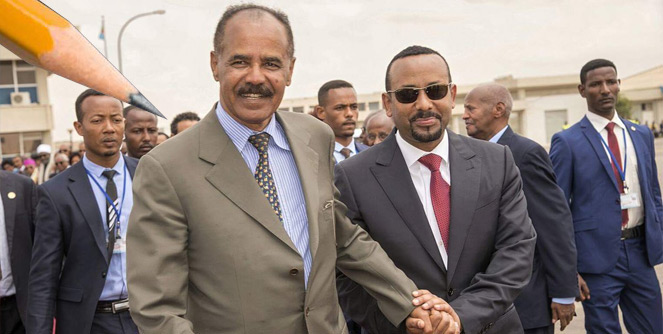 This is the first time PM Abiy Ahmed mentions there are Eritrean political opposition groups based in Ethiopia. However, he did not acknowledge the one-way exodus of  Eritreans to Ethiopia, or to neighboring countries, particularly to Ethiopia, nor the gross human rights violation by the Isaias regime.

One of the immediate and visible outcomes of the peace agreement that Isaias Afwerki and PM Ahmed Abiy signed last September included the opening of the borders and the lifting of restriction travel between the two countries.  However, land travel has been stopped while air travel remains open. Ethiopian Airlines has been operating an uninterrupted flight schedule since it started flying the Asmara-Addis Ababa route.

Following the opening of the border in September 2018, about 30,000 people left Eritrea to Ethiopia; most of them are housed in refugee camps in the Tigrai region of Ethiopia. According to a UNHCR report, despite the “rapprochement between Eritrea and Ethiopia”, about 5000 Eritreans have been leaving their country every month to take refugees in neighboring countries.

An Attempt on the Life of General Sebhat Efrem

On December 23, 2018, the Zalambessa-Serha border crossing was closed following the December 19, 2018, assassination attempt on the life of Sebhat Efrem, the only surviving four-star general in the Eritrean army and a veteran of the armed struggle. (The other four-star General, Ogbe Abraha, was jailed with the G-15 and in 2001 and is believed to have died in prison.)

A few days prior to the closure of the border crossing, social media platforms witnessed heightened activities by the supporters of the Eritrean regime accusing the Tigrai ruling party (TPLF) of plotting to “disrupt Eritrean security” and of masterminding the attempt on General Sebhat Efrem’s life.

TPLF is the archenemy of the Eritrean ruling party (PFDJ).

In the days leading to the 28th anniversary of the Independence Day, May 24, leaked information circulated indicating the Eritrean government will implement a system where Eritreans would need to acquire a travel permits to travel to Ethiopia, similar to permits required by travelers to Sudan. However, the May 24 anniversary passed without such an announcement.

Sources informed awate.com that the Eritrean government is insisting the Ethiopian side of the border crossing station be manned by the federal government instead by the the Tigrai regional government. The request is believed to be a ploy to distance the TPLF from the checkpoints. However, with the exception of a small portion that connects Eritrea to Ethiopia in the Afar region, in the southwest of Eritrea, the rest of the Eritrea-Ethiopia boundary borders the Tigrai region.

In the last three-months, the flurry of activities that first followed the signing of the peace agreement between Eritrea and Ethiopia has subsided.

Between Sept 2018 and March 2019, PM Abiy Ahmed and Isaias Afwerki have met at least ten- times. On the contrary, they have not met at all in the last three months. And so far, both countries have not reported of any development regarding the implementation of the agreement that Isaias and Abiy signed.

In his interview with the VoA, PM Abiy acknowledged that there is no normalization of the Eritrean politics, similar to that of Ethiopia.

Eritreans have not gained from the much-publicized agreement and not reaped anything from the promised peace dividends even in the form of either releasing prisoners who have been in jail without trial, some as long as 20 years, or in the form of other conciliatory and normalizing attempts. And after one year of  “rapprochement between Eritrea and Ethiopia”,  the Isaias regime has not shown any sign of loosening its grip on power  and has not embarked on any step towards reformation.

Three months ago,  PM Abiy noted the severe financial problems facing both Eritrea and Ethiopia. He stated  Ethiopia is burdened by a $42 billion debt it owes creditors and it will not take any more loans until it reduces its debt level. He also added that Eritrea doesn’t have the required funds to rehabilitate its port facilities and the highway that connects it to the Ethiopian border. Furthermore, he explained the Eritrean government has confirmed that the “road is damaged, [and] it hasn’t been operating for twenty years.’ And the [Eritrean] officials say’, “the road needs design, … funds to repair it, …. [and] there is no power and no cranes [in the port].”

Saudi Arabia and UAE, have promised heavy investments when they brokered the peace agreement between Isaias Afwerki and Abiy Ahmed. However, now they are having their own political and financial challenges, particularly due to the diplomatic problems created after the killing of Gemal Khashoggi, and the international condemnation that ensued in addition to the humanitarian disaster the Saudi-UAE war in Yemen has created.  It appears Saudi-Arabia and the UAE will have difficulty in financing the projects they promised to the two signatories.

To make matters worse, the delay and absence of the investment that Saudi Arabia and the UAE promised PM Abiy led him to visiting Qatar, a country boycotted by both Saudi Arabia and the UAE. Diplomatic sources said the visit has, particularly, annoyed Isaias, who had positioned himself as a bridge for PM Abiy to cross through to the Gulf states, and Isaias’s present patrons the Saudi and UAE. Until the Yemen crisis, Qatar used to be a close ally and patron of Isaias Afwerki.

It seems PM Abiy’s has slowly and gradually realized the challenges in dealing with Isaias and his initial enthusiasm is giving way to cautious moves in embracing the dictator more closely. It remains to be seen whether PM Abiy will recalibrate the political alliance he initially forged with Isaias to weaken the TPLF, one of the four-party ruling coalition in Ethiopia. Also, planning for the Ethiopian election scheduled for 2020, PM Abiy might not want to squander any more political capital in trying to convince Isaias to reform and play by the rules.