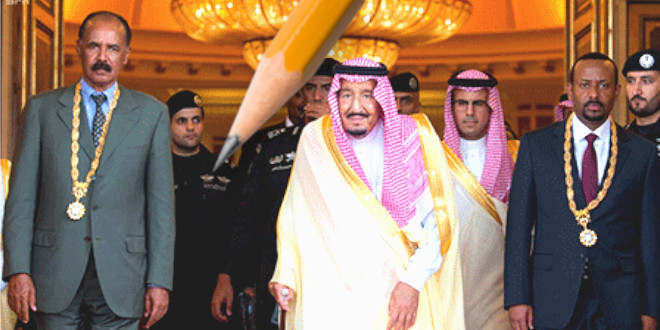 On 13 January 2020, the Eritrean Ministry of Information  criticized a Saudi Arabian official for stating his country’s  “efforts to resolve differences between brothers in Africa” and asserted “the Kingdom has harnessed its pioneering Islamic role in this regard… the first result of those was the historic peace agreement between Ethiopia and Eritrea”.

An Eritrean press release considered the Saudi statement was “grossly at variance with the genesis and facts of the historic agreement” while it recognized “the goodwill of our international partners,” it considered the statement “a condescending narrative that belittles Africa and its achievements”.

However, according to Reuters, on September 2018 Ethiopia’s Prime Minister Abiy Ahmed and Eritrean President Isaias Afwerki signed the above mentioned “peace agreement” in Jeddah, Saudi Arabia, .

Usually, the Eritrean government is obsessed with portraying itself as extremely independent and doesn’t give credit or acknowledge outside support. Instead it claims it accomplishes everything single-handedly.

Saudi Arabia maintains an uneasy relation with Isaias Afwerki and is worried he might get involved in Yemen where it is waging a helpless war since 2015 and complicate matters. Isaias’ latest visit to Saudi Arabia has addressed the lingering issues and hasten the flow of Saudi investments, and funds promised to the PFDJ coffers.

Both Saudi Arabia and the UAE portray themselves as sponsors of the Abiy-Isaias rapprochement of 2018.

Though Qatar’s tireless efforts to reconcile Eritrea and Djibouti didn’t bear fruit, both Saudi Arabia and Ethiopia claim they helped reconcile the two. However, nothing has changed on the ground since Qatar pulled its troops that were stationed for almost a decade in a buffer zone between the two countries.

Isaias’s threat that he will get involved in Ethiopian affairs has resulted in reactions from the TPLF, the ruling party in the Northern Ethiopian Tigrai region. TPLF made harsh threats against Isaias Afwerki warning, hey will “cut his hands” if he interferes in Ethiopian matters.

Abiy Ahmed’s targeting of TPLF, the government of the Ethiopian Tigrai region in collaboration with Isaias Afwerki, and the prevalent heightened rhetoric is pushing the region towards a precarious situation that might result in disastrous consequences.

Meanwhile, politicians in Eastern Sudan are accusing the Eritrean government of involvement in the region. At the center is General Mahmoud Humed, the present governor of the eastern Sudan province.

In 2006 after the Eritrean facilitated Eastern Sudan Peace Agreement, Eritrea asked for the then chief of military intelligence Colonel Mahmoud Humed from the region. He was promoted to the rank of Brigadier general and transferred to Chad as a military attached at the Sudanese embassy.

When the Sudanese Eritrean relations deteriorated over smuggling and political interference, Mahmoud Humed was promoted to the rank of Major General and brought back to Eastern Sudan as a commander of the 11th Division. He was appointed as the governor of the Kessela state during the recent Sudanese uprising. There is bad blood between the current governor and the Eritrean regime.

Eastern Sudan is home to many Eritrean and Sudanese forces that benefited from the corruption in the region, including human trafficking and smuggling rackets, which are fiercely competing against each other to keep their criminal businesses. This time they are veiled behind different political parties.

Ethiopia “Not verify and Arrest, but Arrest and then verify”

Meanwhile, Abiy Ahmed gave orders to free prisoners who were arrested during his “anti-corruption” campaign. He gave directives to the attorney general to re-investigate the cases and free the wrongly accused prisoners. The arrests were mostly arbitrary and of a political nature and mainly targeted officials and military officers of Tigraian origin.